The MUSCLES and Mega-MUSCLES Treasury Surveys are large observing programs that have used the Hubble Space Telescope, Chandra X-ray Observatory, XMM-Newton, the Neil Gehrels Swift Observatory, and a suite of ground-based optical telescopes to construct panchromatic (5 Å - 5.5 μm) spectral energy distributions for a representative sample of M dwarf stars (Refs [0],[1]). The primary goal of the surveys is to characterize the stellar energetic radiation environment and activity levels in dwarf stars and determine their effects on exoplanet atmospheres and habitability; however, the survey observations have also been excellent probes of the energetic properties of flares in dwarf stars, providing X-ray and ultraviolet (UV) time-resolved spectroscopy for a range of M star masses, ages, and activity levels.

One of the targets in the Mega-MUSCLES survey was the M2.5V (0.35 M⊙) star GJ674. It hosts a hot Neptune exoplanet in a 4.7 day orbit. GJ674 is classified as a "weakly active" star: it has regular starspot activity and shows emission lines of CaII H&K, but does not show Hα in emission, the characteristic definition of an active flare star. However, results from the MUSCLES survey have shown that even optically inactive dwarf stars show regular activity in the UV (Ref. [2]) and GJ 674 was no exception. Here, we present the properties of one particularly energetic flare and discuss early efforts to model the flare using radiative hydrodynamic (RHD) models of chromospheric condensations in the flare.

The surveys were centered about far-ultraviolet (FUV; 1150-1700 Å) spectroscopy and time-series monitoring of the stars using the Cosmic Origins Spectrograph (COS) and Space Telescope Imaging Spectrograph instruments on board the Hubble Space Telescope. During the observations with COS (Refs. [3,4]), GJ 674 experienced a large flare (Figure 1). 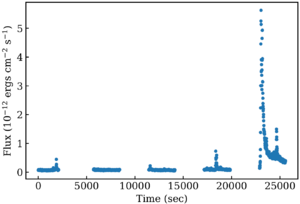 Figure 1: During FUV observations with the Hubble Space Telescope, the M2.5V dwarf star, GJ 674, exhibited several small flares and one large flare in the last exposure.

The flare energy was not particularly large compared to those seen in active flare stars (EFUV = 1030.75 ergs, compared to E>1033 ergs recently seen in a flare on a young M star; Ref. [5]). However, if normalized to the basal flux of the star, the flare was extraordinary. The equivalent duration, δ, of a flare is the length of time the star must emit in quiescence to equal the energy emitted in the flare. For GJ674, the equivalent duration was an impressive δ ≅ 30,000 sec (compared to 6700 sec for the energetic flare mentioned above), more than 4 times higher than any flare observed in the FUV by HST and comparable to the AD Leo "Great Flare" observed by IUE (Ref. [6]), which had δ > 40,000 sec. Thus, while an older star such as GJ 674 emits flares of lower absolute energies then young, active flare stars, it still emits flares that are a significant fraction of the overall energy budget of the stellar irradiance. 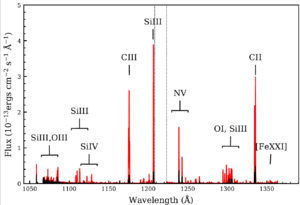 In general, the lower temperature chromospheric lines showed flux ratios (the peak flare flux normalized to the quiescent flux) comparable to those seen in the flares of other optically inactive stars observed in the MUSCLES survey: C III and Si III increased in flux by a factor of ~100 and C II by 30-50. However, the higher formation temperature N V line and the FUV continuum emission increased by larger factors in the GJ 674 flare (by a factor of 10 vs. 5 for the largest flare previously observed) and the [Fe XXI] 1354 line, only marginally detected in previous flares, increased by a factor of ~20 in GJ 674.

The flare spectrum also showed a strong FUV continuum component. Time-resolved light curves of the lines and continuum during the flare showed that the continuum tracked the time evolution of the chromospheric lines, peaking earlier and declining faster than the coronal [Fe XXI] emission line. The latter remained high well after the impulsive phase of the flare, indicating ongoing heating in the corona. We fit a single temperature blackbody to the FUV flare continuum emission. The best fit, shown in Figure 3, has a color temperature of Tcolor ≅ 40000 K. 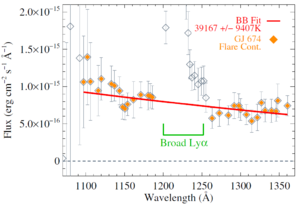 Figure 3: The continuum emission during the flare is fit with a blackbody, showing that the color temperature of the flare emission was Tcolor ~ 40,000K.

During the impulsive phase of stellar flares, the stellar atmosphere is believed to be heated by a beam of mildly relativistic, non-thermal electrons accelerated after magnetic field reconnection and directed from the corona along the field lines into the stellar chromosphere. The electron beam drives a downflowing compression of the chromosphere; these "chromospheric condensations" (CCs) are possible sources of the visible band signatures of M star flares. Radiative-hydrodynamic (RHD) simulations of the CCs can match the observed characteristics of M star flares by enhancing the levels of electron beam heating over solar models. When the beam energy flux rate is high, the flaring regions exceed a continuum optical depth of τ > 1 and produce a spectrum with a characteristic temperature T ~ 104 K with a small Balmer jump, consistent with the signatures of flares seen in optical observations of M dwarf flare stars. However, such models require the introduction of multiple emitting regions on the star, including regions with lower densities, to produce optical spectra consistent with observations. They also require flux density levels that may drive beam instabilities, suggesting that alternate heating mechanisms may be at play.

A recent paper (Ref [8]) has developed parameterizations of CC properties based on a suite of existing RHD models. (See RHESSI Nugget #315.) The parameterizations can be used to predict observables from existing RHD model flare atmospheres without generating computationally intensive full simulations. We used these prescriptions to investigate how well the CC models could predict the FUV continuum observed in the GJ 674 flare. Fig. 4 shows the superposition of two models: a F11 solar flare model scaled up to match the typical optical spectra seen in M star flares and an additional, hot,dense gas component. The combined models can replicate both the FUV and optical properties of the flare but require the ad hoc addition of a second emitting layer. We also considered emission from a superhot T>30 MK coronal source as is sometimes observed in solar flares (Ref [9]), but found that the extension of that emission source to the FUV required a flaring volume that was unreasonable to match the observed flux. Thus, we find that the FUV continuum in the flare indicates that higher column mass is heated than predicted by any RHD beam model so far explored. 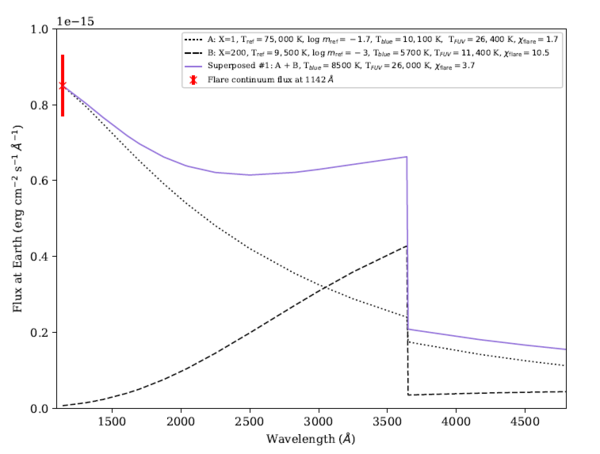 Figure 4: Flare model flux densities in the FUV and optical. The dashed line is parameterization of a F11 solar flare model multiplied by a factor of 200 to match the optical color temperature and Balmer jump parameters seen in M dwarf flares. The dotted line is a Tref = 75; 000 K, log(mref) = -1:7 downflowing compression layer (the stationary layers of the CC are set to zero). The solid blue line is the superposition of the previous two models. The χflare values give the size of the Balmer jump ratio. mref is the column mass (in units of g cm-2) at the chromosphere depth in which the chromospheric gas is in steady state with the electron beam heating. A value of log(mref) = -1:7 represents a very dense CC component compared to the solar case.

The large flare we observed in the FUV with Hubble is unprecedented in several respects. In terms of the absolute flare energy, it is not particularly strong compared to historic M dwarf flare star observations. However, the equivalent duration of the flare places it in the realm of the highest amplitude flares observed. Moreover, the color temperature of the continuum, fit with a 40,000 K, is the hottest spectroscopic color temperature contribution to a broadband flare spectrum measured to date. We investigated modifications to existing RHD flare models needed to match the observed FUV continuum. We found that the addition of a very hot compression slab in the chromospheric condensation region can generate the requisite FUV color temperatures but requires gas column masses significantly higher than are produced in current RHD models of stellar flares. This indicates that current models of dwarf star flares are missing physics that drives hot emission during the flare and that simple extensions of solar flare models to M dwarf stars (by raising the electron beam flux, for example) are not sufficient to replicate the flare behaviors of M dwarf stars.

[0] The MUSCLES Treasury Survey. I. Motivation and Overview

[5] HAZMAT. IV. Flares and Superflares on Young M Stars in the Far Ultraviolet