A growing cusp-shaped flare arcade is a typical feature in the standard model of eruptive flares, and is regarded as a signature of magnetic reconnection taking place at progressively larger coronal heights. This feature resulted from 2D approximations to the process, while an earlier Nugget described a generalization to 3D. As reconnection occurs at successively larger heights in the solar corona, the outer flare loops have systematically higher temperatures than the previously reconnected ones, located underneath. We report (Ref. 1) rare observations of a confined flare that exhibited an apparent cusp with a temperature distribution distinctly different from those reported in literature, exhibiting an increasing temperature with increasing height even in the absence of an eruption. 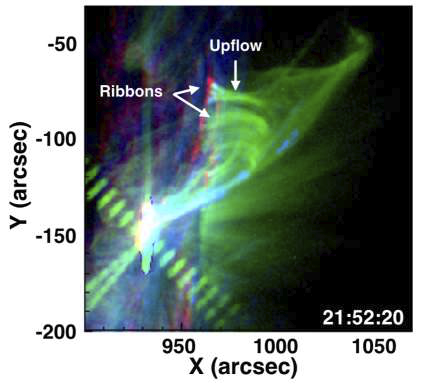 After the impulsive phase, RHESSI X-ray emission, of a partly nonthermal nature, originated from the cusp-shaped structure. This indicates continued particle acceleration during the decay phase (Figure 2). Prolonged hot emission was further observed, consistent with ongoing energy release in the apparent cusp (Figure 3(b)). 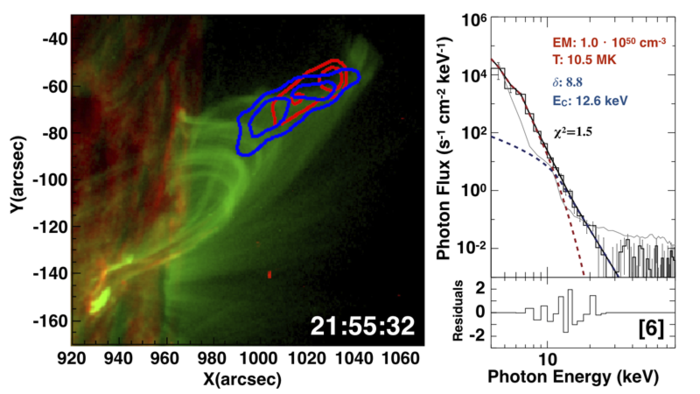 Figure 2: Left: Composite of AIA 1600 Å (red) + 131 Å (green) images showing the (E)UV flare emission during the decay phase. The RHESSI sources for 3 - 8 keV (red) and 8 - 20 keV (blue) with contours at 60% and 80% of the maximum emission are over-plotted. Right: Corresponding X-ray spectrum. The X-ray spectrum of background-subtracted data (black solid line) is plotted together with the fitting results for the isothermal component (red dashed line), and the non-thermal component (blue dashed line). The background is represented by the grey solid line. The electron temperature, T, emission measure, EM, electron distribution spectral index δ, the cutoff energy, EC, as well as the chi-squared of the fitting, Χ2, are all listed in the figure legend.

Given the observational characteristics, the cusp-shaped appearance of the flare was most probably related to a kinked shape of the magnetic field (Figure 3(a)). The extended enhanced SXR and EUV emission during the late phase provides evidence of a weak process of ongoing energy release. This can also explain the increasing temperature distribution with height observed during the decay phase (Figure 3(b)).