Please refer to the previous Nugget for background information on how millimeter-wave astronomy and gamma-ray astronomy help us understand the most powerful flares. We are entering a domain of solar physics that is little explored, namely the rare flare events that produce extremely high particle energies. The energies can extend above RHESSI's range, but of course an event in this category produces emissions at all wavelengths. These are the "pion events," for which we have clear evidence for the production of pi mesons by nuclear interactions involving primary particles at above about 200 MeV/nucleon. These events are rare - no more than about ten have been recorded in all - but not necessarily atypical except in magnitude. The observations are so difficult that many other lesser events with similar properties could have gone undetected.

Millimeter-wave Observations of a Pion Event

Figure 1 shows millimeter-wave observations by Thomas Lüthi and colleagues (Ref. [1]); they observed a remarkable solar flare from a remarkable observatory on the celebrated Swiss mountain Gornergrat. Together with extreme skill, such an observation also requires exceptional luck, considering the rate of such events to be fewer than one per year. These observations, at 210 GHz (1.4 mm wavelength), show the highest-energy range of the synchrotron spectrum, thus revealing electrons accelerated to >10 MeV, and also something new that we will discuss below. The millimeter-wave sources during phase B are very compact, as the bottom top panel of the

Unfortunately RHESSI only observed a part of this event, but very remarkably (see our earlier Nugget) it could make an image of the 2.223 MeV neutron-capture line sources. The 2.223 MeV emission orginates from two spots on the flare ribbons seen in EUV by TRACE (Figure 2). Interestingly, the millimeter-wave emission during phase B coincides with one of the 2.223 MeV footpoints (Figure 2, top) suggesting that the millimeter emission is linked to pion production. 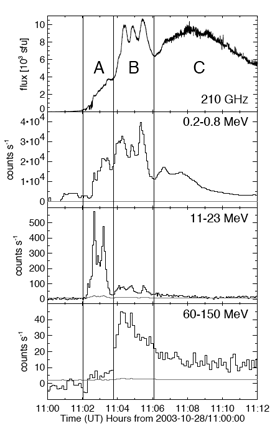 Figure 1: Comparison of gamma-ray observations from the SONG instrument onboard the CORONAS-F satellite, which had both full time coverage and also high-energy response. The uppermost panel shows Lüthi's 210 GHz flux, and the lower panels show hard X-rays and gamma-rays as marked. The 60-150 MeV channel mainly reflects neutral pions since they decay into gamma-rays. Can these pions be related to the unusual mm-wave source labeled B here? Note that this rather amazing flare was also the source of seismic waves penetrating the solar interior (also the subject of an earlier Nugget, itself a quite remarkble thing and one that we might speculatively link with the pions).

The Millimeter-Wave Source and the Pions

Can we relate the pions to the novel mm-wave source? See Figure 2 of our introductory Nugget on this subject to marvel at the positive slope at the highest frequencies - quite unusual, but this is not the only flare to show this new component (originally discovered by Pierre Kaufmann). Figure 2 below shows some of the wealth of data that we can use to try to answer this question. 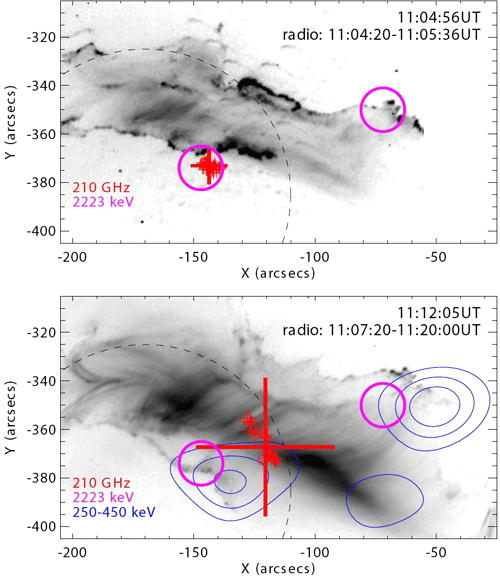 We consider three possible mechanisms for the mm-wave source. First, it could be ordinary synchrotron radiation from electrons, but with "Razin-Tsytovich suppression" which occurs at high plasma densities to produce the positive slope seen in the earlier Nugget's Figure 2. Second, it could be synchrotron radiation from the positrons emitted as secondaries to the primary pions - in general terms, primary GeV protons interact with "stationary" protons to produce pions, which promptly decay into two gamma-rays if neutral, but if charged then decay further into charged muons and charged (both + and -) electrons. Synchrotron radiation from positrons might explain our mysterious source. Finally, optically thick free-free emission might produce a Rayleigh-Jeans spectrum. There are other possibilities that are weird (e.g. coherent emission from proton beams), but none of the possible explanations is very compelling. So: we need more observations like this and even at higher frequencies (SST, SMESE, and ALMA) in Solar Cycle 24!

Gerard Trottet is a senior astrophysicist from the Observatory of Paris at Meudon; he has great experience in high-energy and radio observations. Säm Krucker is a senior RHESSI team member. Hugh Hudson helped with the text of this Nugget.