A STEREO/RHESSI Flare at Solar Minimum

It seems that a solar cycle often ends with a bang, rather than a whimper. We saw this in the "last best flare" of sunspot cycle 22, the previous one when the remarkable flare seismic waves were originally discovered by Kosovichev and Zharkova (Ref. [1]). Lo and behold! Cycle 23 has done something similar with a flare on March 25, 2008. One might say it is overdue, since that time interval (11.75 years) is longer than the average solar cycle, at least lately. This flare many not have been really unusual (but see below), however its impact will be great because it is the first major CME/dimming event well-observed in full perspective by the STEREO spacecraft.

We first take a quick look at RHESSI time variations (Figure 1 below) and find a little surprise. The Neupert effect usually describes the relationship between hard and soft X-ray time variations in a flare. It results from the accumulation of hot plasma (the source of soft X-rays) in the lower corona as the flare develops (marked by the hard X-rays). This flare does not show the Neupert effect very well, and is immediately interesting because of this. 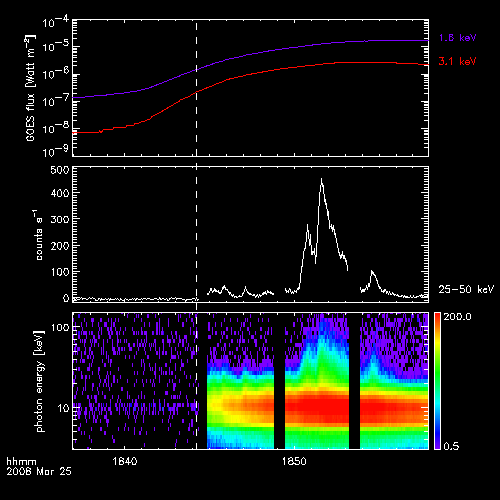 Figure 1: Light curves (GOES soft X-rays above, RHESSI hard X-rays in the middle, and the RHESSI spectrogram at the bottom). A "light curve" is just the astronomer's way of describing the time variation of the source brightness. So, faced with this mystery, let's take a look at the images (Figure 2) and see what the reason for the unexpected behavior might be. 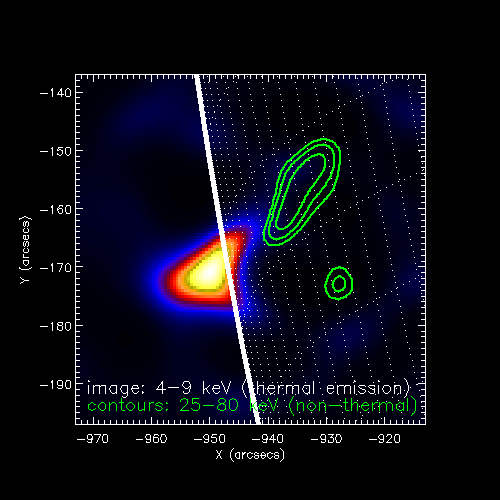 Figure 2: An image of the flare from RHESSI, showing the soft X-rays from the tops of magnetic loops that presumably connect to the photosphere at the site of the hard X-ray sources (contours). And, voila!, this looks perfectly normal. We see hot plasma in the corona, at an altitude great enough to extend above the location of the solar limb (heavy white line), with hard X-ray footpoints pretty much where they would be expected.

The Sun has served up an interesting flare at a normally boring time, solar minimum. Its time variations are strange but its RHESSI images look normal. Analysis is just beginning on this event, but it is clear that somebody should do a detailed analysis. Fortunately, because of the unprecedented data that are available, somebody will soon do so and we will faithfully report it in a future Nugget. Whoever does this will certainly want to make use of the STEREO observations, which the movie linked to Figure 3 sketches out. 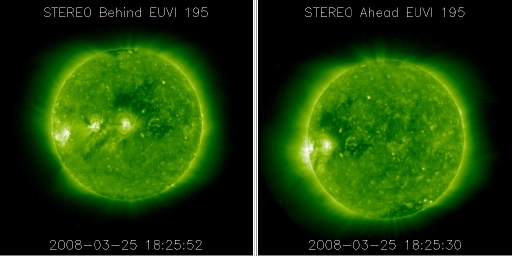 Figure 3: Stereo images of the flare from the Behind and Ahead spacecraft - the names refer to their locations along Earth's orbit. The different image sizes show that they are at slightly different distances from the Sun (almost, but not, one AU). One can match features one-to-one to get a feeling for how much rotation separates the two view angles. Click on the image to link to a movie that shows remarkably different appearances at STEREO Behind and STEREO Ahead. Click here for the view (another movie) from SOHO, situated at the L1 Lagrangian point of the Earth-Sun system.

A keen eye, looking at this movie, can see a coronal dimming in the images from the Behind spacecraft, and note that it is not visible in the Ahead images. The two STEREO spacraft are now separated by tens of degrees - check out the STEREO orbit tool to learn more. Unfortunately the stereoscopy may be a little bit more informative for the CME, high in the corona, than for the flare, which was occulted at Ahead. But still we have the stereo pair of SOHO (or TRACE) and Ahead.