RHESSI observations have abundantly confirmed the close association of hard X-rays with white-light flare emission. But what is the emission mechanism for the optical white light spectra? and what do the spectra tell us about the physical properties of the medium? Unfortunately since about the 1980s, there have not been many opportunities to obtain broad wavelength coverage optical spectra of solar flares.

So... in the absence of much direct spectroscopic evidence, we need to turn to stellar flares for insight. One problem on the Sun is to get the spectrograph slit situated on the right part of the Sun at the right time. With stars, there is no problem about "where", just "when", but many flare stars are much more active than the Sun and also produce more powerful flares. We can use these spectra for guidance on the physics of solar flares, with of course the hypothesis that the solar and stellar flare events are fundamentally similar. We report here a "Megaflare" example (reference [1]) from the well-known dMe star YZCMi.

We do not call this a "megaflare" for no reason - Figure 1 (a) shows the light curve obtained with the NMSU 1-m telescope at Apache Point Observatory, which reveals a colossal brightening of almost six magnitudes in the U band. The peak flare emission in this filter alone increased the stellar luminosity by nearly 40%; for comparison (see the previous Nugget) the most powerful solar flare does not appear to increase the solar luminosity by more than about 0.1%. The total flare energy in the U band was more than 1034 erg, much larger than the most violent solar flare. The light curve shows a typical fast-rise/slow-decay pattern, and a duration of many hours. During the time period between the vertical lines, many optical spectra were obtained using the ARC 3.5m telescope at Apache Point Observatory. The spectra were obtained with 10 sec exposures and a cadence of 30 seconds.

The spectra (Figure 1b) cover the key near-UV and optical (blue) spectral range including the wavelength (364.6 nm) of the Balmer jump. These spectra turn out to be extremely interesting: the Balmer continuum is present, indicating the presence of hydrogen recombination radiation, but at longer wavelengths we can make a good fit (shown with a red line in Figure 1b) to a blackbody spectrum. Both continuum sources are required in order to fit the data. Prominent Balmer emission lines are also visible. We use models from reference [2] to fit the Balmer continuum spectrum, and find that the area coverage of the blackbody component is about 10% of the area coverage of the Balmer continuum source, varying somewhat during the flare. 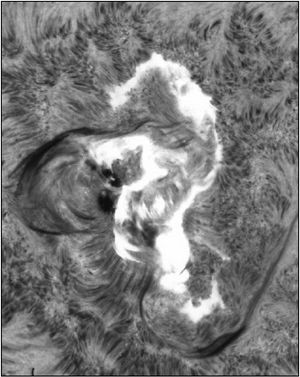 Few spectra of solar flares have comparable quality (see for example reference [3]). On the other hand we have no idea what the spatial structure of the stellar flare is, except via modeling, while solar flares can be seen in excellent spatial detail. Figure 2 shows an image of the celebrated flare of August 7, 1972, obtained in Hα. Note that Hα is a member of the Balmer series but at a wavelength (656.3 nm) too long to appear on the stellar flare spectrum of Figure 1b. This powerful flare may be the closest the Sun can offer to the stellar megaflare, even though orders of magnitude less energetic. There is a great deal of spatial structure including ribbons and loops, and this evolves in a complicated manner. The stellar flare has unknown structure so we must use the solar analogy to inform our models.

In a sense, then, we have orthogonal observations: for the stellar flares, we have excellent optical spectra; for the solar flares, we have spatially resolved images and observations at many wavelengths. To identify common physics between the two phenomena still requires a leap of faith even though there are many points of similarity that we do not discuss here. The situation may be changing now that SDO has been launched. Its EVE instrument obtains "Sun as a star" spectra that will have high time resolution for many solar flares. The spectral range is 0.1-100 nm, and thus does not cover the optical continuum as the stellar spectra (Fig. 1) do, but this spectral range does have many diagnostic lines and continua.

High time-resolution, broad wavelength-coverage optical spectra of stellar flares suggest multiple continuum emission components, which have not yet been described on the Sun. Obtaining new solar observations to decipher the optical and near-UV continuum emission during flares would be very useful for comparison.

[3] Analysis of the optical spectra of solar flares. II - The energetics of the June 4, 1980 white light flare