Particle acceleration is one of the more perplexing issues as we try to understand how solar flares work. The particles (electrons at 10s of keV, and ions at MeV energies) contain a large fraction of the total flare energy. Thus one cannot expect to find a self-consistent fluid (MHD) model. Nevertheless virtually all of the theoretical work on large-scale aspects of solar flares is presently within the MHD framework. In the topic described here there are features both of large-scale MHD concepts and also particle acceleration, so these ideas are somehow very attractive!

The coronal magnetic field can undergo large-scale restructurings during a flare or CME. If this restructuring happens adiabatically, i.e. on scales large compared with the Larmor motion of the particles in question, they can gain or lose energy. A "collapsing trap" is exactly the sort of geometry expected from large-scale magnetic reconnection, and so this concept provides a basic mechanism for particle acceleration in a flare or CME. The sketch in Figure 1 shows how this might work. Basically it shows reconnected magnetic field lines "dipolarizing" rapidly away from an X-point above the top of the diagram. This process is the basic element of the standard reconnection models of solar flares, as explained copiously elsewhere among the Nuggets (for example, here. The field-line motion can also be thought of as a plasma flow perpendicular to the field direction. The HTTCS is a "high-temperature turbulent current sheet" structure involved with the magnetic reconnection. 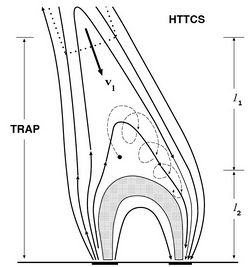 A collapsing trap actually may accelerate particles in two distinct ways: "betatron" and first-order Fermi acceleration. These result respectively from diminishing diameter of the collapsing flux tube, and from its decreasing length. The latter is easier to understand - as the trap shortens, the two reflective mirrors apparently approach one another. The motion of the mirror means that the reflected particle gains energy. To understand the betatron process one has to follow the basic physics of adiabatic particle motion; essentially the particle energy increases proportionally to the magnitude of B during the collapse. The Fermi process is a little more complicated since it depends on the field geometry in a more complicated way. 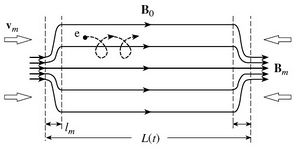 This rough description omits a great deal of complexity. Even though the basic physics is straightforward, and has been known for many decades, the application to an astrophysical situation requires that we know what particles are there, how the flows in the plasma proceed, and other somewhat intangible details involving wave-particle interactions. To assess these complicated issues in a satisfactory manner really requires model-building, using realistic parameters taken from the observations as a guide. We also need to bear in mind the distribution function of the particles prior to the collapse.

It seems a foregone conclusion that this mechanism plays some sort of role in flare particle acceleration, since we are quite sure on energetics grounds that the coronal magnetic field has to restructure itself during an event. So any particles attached to restructuring fields are going to get accelerated at least some of the time. Another place where this sort of mechanism is well accepted is the Earth's magnetosphere, where "radial diffusion" pumps particles up in energy as they approach the Earth via multiple scattering processes.

In the case of solar flares it seems very likely that the collapsing-trap physics plays a role in the formation of coronal hard X-ray sources, about which we have been learning a great deal from RHESSI (see here, here, here, or here for various Science Nuggets on likely events.

The basic idea of the betatron mechanism was introduced to to explain the behavior of flare hard X-rays in the 1970s by John Brown and Peter Hoyng. The idea of particle acceleration by varying magnetic fields had been around prior to that, notably in a 1933 paper by Swann and then by Forbush, who explained increases of "solar cosmic rays" in this way. The betatron, incidentally, can also be called an Ausserordentlichhochgeschwindigkeit-electronenentwickelndesschwerabeitsbei-gollitron. It (and first-order Fermi acceleration) has come back into vogue not only because of the new information about coronal hard X-ray sources mentioned above, but also because of the growth of the new field of coronal seismology. We've already touched on this in an earlier Nugget. (Yet another Nugget dealt with the probably not unrelated sunquakes). We look forward to the complete surveys of oscillations in the solar corona that the soon-to-be-launched Solar Dynamics Observatory (SDO) will provide. Data comparisons between RHESSI and SDO's imager AIA instrument will be informative. Will these new observations provide further insight into the acceleration mechanisms implied by the "collapsing trap"?