Because it can study high-energy particles in the solar atmosphere, RHESSI has provided the definitive observations of solar flares in the past sunspot maximum. During the long minimum just ending, few flares happened, and so the RHESSI team is eager to see the next maximum begin with a bang; as noted in a previous Nugget, all systems still work well even though the 8th anniversary of launch is only a month away. The exact timing of the anticipated increase of activity is important for RHESSI operations, because we will anneal the detectors at some optimum time - but when? The purpose of this Nugget is to describe the recent increase of activity as input to help figure out when this optimum time will come. We do this by analyzing the F10.7 index, one of the most dependable and quantitative of the measures of solar magnetic activity.

There seems to be little question that the new-cycle activity has come to dominate at last, and that the minimum occurred late in 2008. We have updated our superposed-epoch plot, Figure 1, as originally described in Nugget No. 99 (see also Nugget No. 91, which actually coincided pretty well in time with the minimum epoch as we recognize it now). 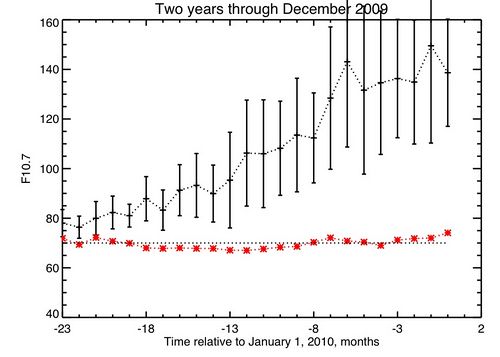 Figure 1: A superposed-epoch analysis of the F10.7 index of solar activity. The points with the range bars show the data prior to our current minimum, keyed to the times of maximum since 1947. The red points are the current data, keyed to the last maximum. The horizontal dotted line is for reference.

Figure 1 shows the F10.7 activity index originating at the Dominion Radio Astrophysical Observatory in Penticton, B.C., Canada. The time series began in 1947 and thus includes five maxima. In Figure 1 we show the earlier data stacked together using simple Gaussian fits to the peak times as "key times". This technique of "summed epoch analysis" has many applications, e.g. as in Nugget No. 99. The points with the range bars in Figure 1 represent all of the previous data, keyed to the times of maximum; the red points show the current data keyed to the past maximum. The rise to the new maximum, if it is happening, is about two years late, and the current minimum points lie well outside the range of previous minima. In fact, the flux level for December 2009 does not even appear to have risen to the equivalent level for December 2007 (based on our summed-epoch compilation).

So is activity really increasing now?

Yes, I think so. Figure 2 shows the precise and ever-reliable F10.7 data in two ways: since the last maximum, and over the last two years on an amplified flux scale. This lower plot provides the justification for saying that solar minimum was in about December, 2008; the upper plot shows that we have a long way to go to have any real activity yet. The lower plot is not perfectly definitive, though, since there were low points prior to the period plotted, and since (of course) there are no points afterwards. 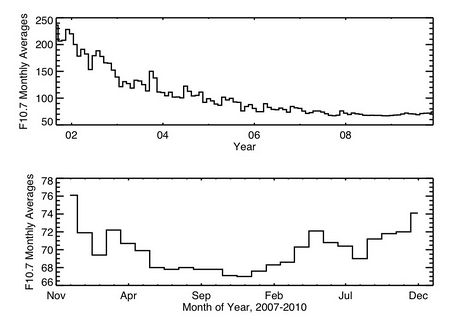 Figure 2: Two looks at the recent variations of F10.7. Upper, the full range from our last maximum to the present; lower, the interval around the suggested minimum time of December 2008.

The F10.7 data have an absolute precision of a few percent, and thanks to diligent observers this has remarkable database has continued uninterrupted since 1947, with a similar but multi-wavelength data set almost as long from Japan, currently based at Nobeyama Solar Radio Observatory. The fluctuations that one sees in the time series are therefore not noise, but signal; the signal is erratic because sunspots and their associated radio emission come and go in a structured manner - which is not to say that we understand the nature of the structure!

This simple Nugget just has the objective of noting that we are pretty sure now that activity has resumed. There have been numerous flares again. Just since December 1, we have had 18 C-class GOES flares, including five on Dec. 22 alone. The background activity associated with these flares can be seen in the small increase for December in Figure 2 (lower). As one can also see from this Figure, the recent increase - though real - is only a tiny fraction of the activity level expected for a normal maximum. Of course we have no idea how big this maximum will be; our pundits and sages were mostly taken by surprise at the extended minimum. Nothing like it has occurred since the 1947 beginning of F10.7, although the sunspot number (another measure) suggests that one or two other anomalously long minima occurred since Galileo (and others, including Harriot and Scheiner) first studied sunspots. 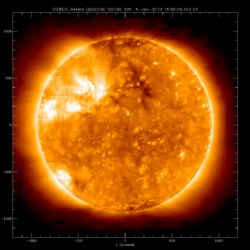 Figure 3: The STEREO "Behind" view of the Sun, showing other active areas. During sunspot maximum generally all heliolongitudes can show activity simultaneously.

Although activity has clearly resumed, Figure 1 shows that we still have ample time to wait for the high activity. Indeed, as this Nugget is being written, the Sun only has a single active region on the visible hemisphere, and that one has relatively small sunspots. On the other hand there is more activity on the far side - see Figure 3, a simultaneous view from the STEREO Behind spacecraft, which trails far behind the Earth in its orbit and has a good view of what may be coming to the front side. We really cannot predict what will transpire next, but for the past three centuries (ever since the Maunder Minimum the solar cycle has rolled along, so it is likely that within a year we will have substantial and persistent solar magnetic activity again.