Pulsations are the strongest flare emissions at decimeter radio wavelengths, and they are common. Coherent stellar radio emissions are of a similar type. Sometimes they are regular oscillations with periods of the order of one second, at other times, and especially at high frequencies, they are irregular and faster. The question may come to the mind of the gentle Nugget reader, how such radio emissions may complement our picture of flare physics. Although decimetric pulsations are generally believed to originate from non-thermal electrons, they often do not correlate in time with non-thermal X-rays. We have decided to select cases where the two emissions do correlate within a few seconds and investigate the spatial relations more closely, using flares that occurred near the limb. This simplifies the geometry and the interpretation of the spatial relations.

Here we present our best case, selected from Phoenix-2 spectrograms and RHESSI light-curves and images, for which observations of the radio pulsations with the Nançay Radioheliograph were available. Figure 1 shows the relation between the radio emissions at several observed frequencies and the coronal X-ray source. The centroids of the positions of the pulsations observed at different frequencies do not scatter randomly, but are aligned. As the signal-to-noise ratios are excellent (up to 100) the centroids can be determined to within less than 10 arc sec typically. 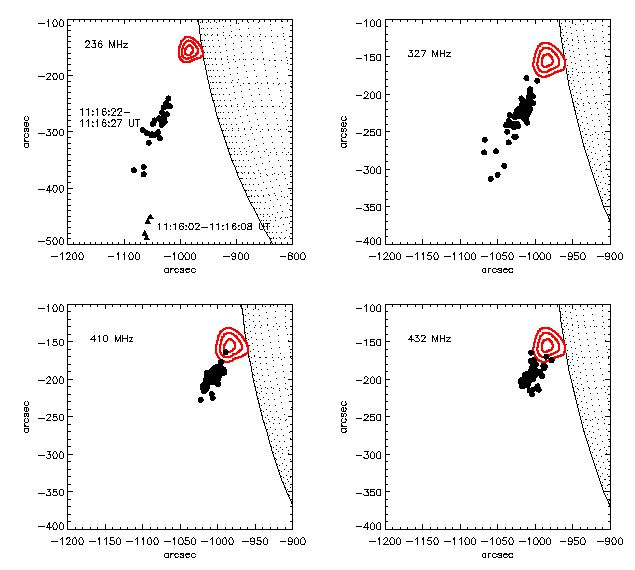 Figure 1: Centroid positions of the radio pulsations measured at several frequencies by the Nançay Radioheliograph and the simultaneous RHESSI Clean images in the 18-25 keV band (50%, 70%, and 90% contours) in the 5 December 2006 flare at 11:16 UT. Time bins of 0.15 seconds having a radio flux above the average are shown as black dots for the four frequencies in which pulsations were present. Note the different size of the 236 MHz picture. An X-ray footpoint was observed at higher energies (see Fig. 2).

The alignment of the scatter at a given frequency is surprising. We have checked whether the linear distribution may be caused by ionospheric scattering or an oscillation between two sources. The results are negative. Although the alignment of the centroid positions is not random but along a line originating from the coronal X-ray source, there is no systematic motion of the radio positions with time during the flare except for the 236 MHz sources. As indicated in Figure 1, they moved inward by some 220’’ within 20 seconds, thus exceeding the commonly assumed values of the Alfvén velocity by more than an order of magnitude. The motion indicates that the conditions (density and/or magnetic field) at the first source were the same as those, 20 s later ,in the second source. Most likely the emission site moved from a relatively dense region high in the corona to a lower region having the same density.

The averaged radio positions at given frequencies are emitted along a linear structure aligned with the coronal X-ray source (Fig. 2). The X-ray images are consistent with a loop system that is crossing over the limb, with the hypothesis that the other RHESSI footpoint is occulted. The radio positions then are reminiscent of the classic helmet cartoon of the flare scenario. Note however that the helmet is not radial and would not have satisfied the specifications for a Prussian army helmet. 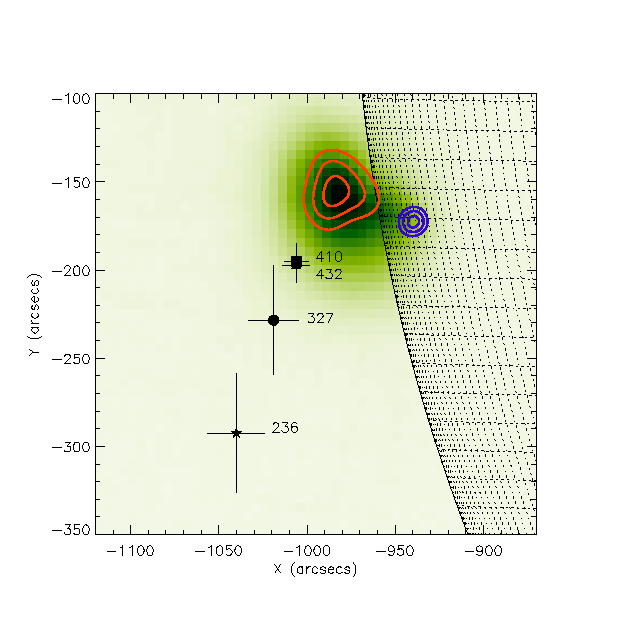 Figure 2: Context information on the 5 December 2006 flare. The "flare averaged" centroid positions observed by the Nançay Radioheliograph are shown superposed on a GOES/SXI image. The position of the second, stronger interval is displayed for 236 MHz. The error bars give the standard deviation of the distributions of the centroids at individual time bins. The contours show RHESSI observations at 18-25 keV (red, coronal source), and 25-50 keV (blue, non-thermal footpoint source).

The highest frequency imaged by the Nançay Radioheliograph is at 432 MHz. The Phoenix spectrogram shows however that the pulsations are observed up to 600 MHz. Extrapolating the radio positions in Figure 2 to higher frequency suggests that at 510 MHz the emission may originate from within the coronal X-ray source. Interestingly, the plasma frequency derived from the X-ray thermal emission measure and source volume amounts to 1170 MHz. It is even higher if the filling factor is less than unity. Thus the observed radio emission cannot originate from exactly the same plasma as the coronal X-ray source.

Radio emissions from pulsations originate above the coronal X-ray source. We thus confirm that decimetric pulsations are not caused by loss-cone instabilities of electrons trapped in flare loops as was generally believed in the 1980s. Surprisingly, the radio emission at the frequencies observed at Nançay does not originate from the coronal X-ray source either, but from a linear structure pointing away from it. This suggests that either the radio-emitting electrons (i) are accelerated in a current sheet above the coronal source, or (ii) are ejected into such a structure that pulsates and modulates the radio emission. The correlation between radio and X-ray emissions needs explanation in view of their separation in space. The communication must propagate an order of magnitude faster than the commonly assumed Alfvén velocity. This may support the second hypothesis. However, as many pulsations do not correlate with X-rays, we prefer the first scenario where pulsations indicate the presence of less-energetic acceleration events at higher altitudes. The density in the coronal source, where most of the energy is released, may already have been enhanced by evaporation.

A paper on this observation (by Benz, Battaglia and Vilmer) is in print at Solar Physics

Biographical Note: Arnold Benz is Professor at ETH Zurich and FHNW Windisch, Switzerland. Marina Battaglia is a Leverhulme Research Fellow at the University of Glasgow, Scotland. Nicole Vilmer is a CNRS researcher at LESIA (Paris-Observatory) in Meudon.