The corona of the Sun hosts flares, coronal mass ejections, and many other forms of solar activity (such as the "flare nimbus" described in the previous Nugget. With Lyot's invention of the coronagraph, we began to get a more detailed understanding of the dynamics of the solar corona, theretofore only visible during an eclipse for a brief few minutes.

Nowadays we have the capability to put instruments in space, and with them to study the solar corona in the EUV and X-ray ranges. This gives us much better sampling of the structural changes associated with flares and CMEs. The latter in particular now are known to be associated with "dimmings," originally seen by the Skylab and Yohkoh soft X-ray telescopes, and identified as depletions of the coronal material as the restraining magnetic field loses control during the restructuring.

Figure 1 shows a dimming event via data from the EVE instrument on SDO. The flare, SOL2012-03-07 (X5.4), also had major high-energy aspects as discussed below. EVE shows the thermal corona via its natural EUV emission spectrum, and the figure details the time variations of many ionization states of iron in the coronal plasma. Iron is not abundant in the corona, but its ions have a rich EUV spectrum, and we can observe almost all of the relevant ionization stages. See our earlier Nugget for more details about this "Fe cascade" plot. 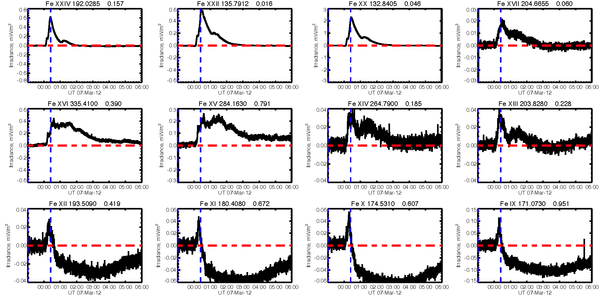 Figure 1: An "Fe cascade" plot showing the time variations of various ionization states of iron, from Fe XXIV (Fe+23) in the upper left, to Fe IX (Fe+7) in the lower right. These represent different temperatures; the high-temperature stages show emission from coronal loops during the flare, and the low-temperature stages show the dimming resulting from the evacuation of the corona by the CME associated with the flare SOL2012-03-07.

The corona at high energies

The dimming effects take place as the corona opens temporarily, allowing the CME ejection to take place. This has major high-energy consequences, long well-studied by radio techniques, but these are hampered by their relatively poor angular resolution. Now we have sensitive hard X-ray and gamma-ray observations (as well as EUV and soft X-ray) that are beginning to provide complementary information, as well as new discoveries. Many of the previous Nuggets, such as No. 104 on decimetric spikes in the context of RHESSI data, have dealt with different aspects of these emerging observations.

Now we have what seems like an entirely new capability, in that Fermi has succeeded in systematic observations of long-enduring emissions of >20 MeV gamma-rays from a long list of flares, but not the original M-class event SOL2011-06-12 described in the earlier Nugget on "black and white flares" (see Ref. [1]). These long-duration events ("sustained emission" would be another description) may continue for 20 hours, long after all other energetic signatures of the flare have ended, and long after the CME has vanished into the heliosphere. They include M-class as well as X-class events. Figure 2 shows the sustained emission for the flare of Figure 1.

Figure 2: Preliminary views of Fermi's "sustained emissions" from the two flares of March 7 (note the other flare detections, including the X-class event on March 5), the event for which Figure 1 shows the EUV signatures. The red points show the presence of significant solar flux, and the plot covers a span of many days. The vertical dotted lines show the entire time interval of Figure 1.

The presentation in Figure 2 is a relatively raw view of the data, but it emphasizes how clearly Fermi's imager can detect the sustained emission, and the vertical dotted lines (the interval from Figure 1) show that the high-energy particles responsible for the emission remain present in the solar atmosphere long after other flare effects have ceased. Future Nuggets will provide more information as it becomes available.

The Fermi observations have revealed that sustained gamma-ray emission is a relatively common phenomenon associated with solar flares: more than 10 events thus far. Unfortunately RHESSI missed this particular event, but has observations for several of the other ones. At present we have little idea how this very significant "sustained emssion" can be created, nor where it originates within the coronal structures that we can see at other wavelengths. But because it involves high-energy particles, we know that it is important.