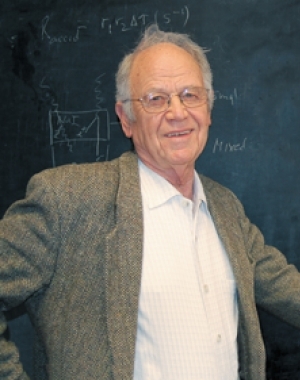 RHESSI has lost another good friend, the creator of the field of solar gamma-ray astronomy.

Ed got an AB with Honors in Physics in 1950 and his PhD in 1954, both from the University of California, Berkeley. For his research there, he worked on detecting radiation from space, and placed one of the first high-altitude neutron monitors on the Mauna Kea volcano in Hawaii. He was a staff scientist at the University of California Radiation Laboratory at Livermore from 1954 until 1959, Chief of the Geophysics Division at Boeing Aerospace from 1959-1962, and a Professor at the University of New Hampshire from 1962 until his retirement in 2007.

Ed is best known for his pioneering work in gamma-ray astronomy with both balloon-borne and satellite instruments starting in the 1960s. He was Principal Investigator for the gamma-ray spectrometers on the “Orbiting Solar Observatory” OSO 7, which flew from 1971-1974, and on the Solar Maximum Mission from 1980 to 1989. He made many discoveries with these instruments, including the first cosmic detection of gamma rays from nuclear reactions during solar flares in 1972 (Ref. [1]), the first detection of positrons at the Sun via their annihilation radiation, and the first observation of gamma rays from pulsars. The field of gamma-ray astronomy, founded on many of his seminal contributions, has blossomed into an essential window into the cosmos summarized in his 1976 book entitled “Gamma Ray Astronomy (Nuclear Transition Region)” (Ref. [2])

[4] “Simultaneous acceleration of electrons and Ions in solar flares”