Two previous Nuggets have shown the importance of free-bound interactions in producing X-ray photons in solar flares, especially where the iron abundance is enhanced over that in the photosphere. This basic component of emission from a plasma, namely "recombination radiation," is included in the databases (especially CHIANTI) used in the analysis of RHESSI spectral observations of thermal emission from hot plasma. Surprisingly, it has never been included in the analysis of the nonthermal emission. In this Nugget, we show that ignoring the non-thermal free-bound contribution to the measured hard X-ray spectra can result in errors in estimating the number of energetic electrons accelerated during a flare that, under certain circumstances, can be very significant.

Ever since their first detection 40 year ago, flare hard X-rays have been recognised as an important diagnostic of electron acceleration and propagation. The large electron flux and power imply that they play a substantial role in flare energy budgets and pose challenges for electron acceleration mechanisms. Recent copious high resolution hard X-ray spectral data from the RHESSI mission have created the possibility of detailed reconstruction of source electron spectra offering important new constraints on the electron energy budget and acceleration processes.

In inferring electron flux spectra F(E), the HXR radiation mechanism has always been taken to be free-free collisional bremsstrahlung of fast electron impacts with atoms and ions. We have re-examined this assumption, and concluded that it is not valid in hot plasmas commonly occurring in some flare HXR sources because fast electrons recombining with ions of heavy elements, especially Fe, produce lots of hard X-rays. We summarize our findings here.

This new insight parallels that of the two earlier RHESSI Nuggets, which note that that the thermal electron continuum can have a large recombination component. We now know that this can be true for the nonthermal (hard) X-ray spectra as well. The effect of ignoring this non-thermal recombination radiation is generally to overestimate the power in the non-thermal electron population.

There are two key ingredients involved. The first is the fact that although heavy elements like iron (Fe) have low abundance compared to hydrogen, their highly ionized stages have recombination cross-sections that are proportional to the fourth power of the atomic number (Z). Thus, their contribution to free-bound interactions can be very large - see Table 1. 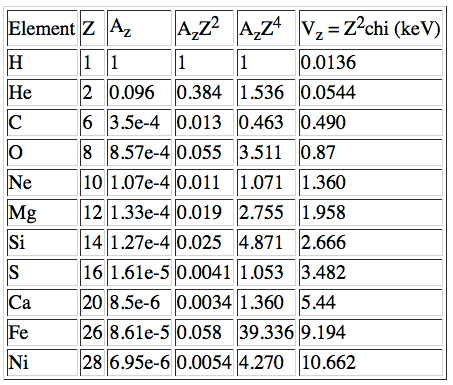 Table 1: This table shows the elements included in our model with their coronal abundances and ionization potentials, together with the values of AZZ2 and AZZ4, which they would contribute if the temperature were high enough (>>108 K) such that all elements were almost completely ionized. AZ is the abundance of the element of atomic number Z. Secondly, the depth of an ionization potential well (V) is proportional to the second power of the atomic number (Z). This means that the recombination emission of a photon of energy ε requires an electron energy of only (ε minus V). This is in contrast to the free-free situation where electrons with an energy greater than the photon energy is required. This situation is illustrated in Figure 1 where the electron energies that can produce 30 keV photons by free-free and free-bound interactions are shown. For photons of energy not much higher than V (up to 10 keV for Fe), this results in there being many more electrons able to emit a photon of a given energy by recombination than by bremsstrahlung because electron spectra F(E) are typically very steep power-laws or exponentials. The effect is particularly large when a steep electron spectrum extends down to low energies. 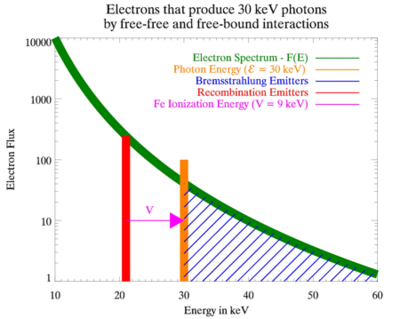 Figure 1: Diagram showing the fluxes and energies of electrons that can produce 30-keV X-ray photons by free-free and free-bound interactions, the latter for highly ionized Fe. The recombination emission taps the region of the electron spectrum between the red and orange bounds, which depend upon the particular element and state of ionization.

Using the basic Kramers cross-section approximations, because of their simplicity, we have estimated the spectral fluxes arising from bremsstrahlung and from recombination for a power-law electron spectrum F(E) with index 5 that is cut off below 10 keV. We assume that the interactions take place in a plasma at a temperature of 2.0 x 107 K. Some results are shown in Figure 2. The non-thermal free-bound continuum actually exceeds the other contributions (thermal radiations plus ordinary non-thermal bremsstrahlung) above about 25 keV. 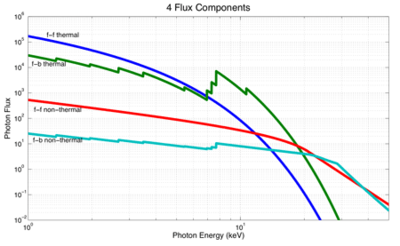 Figure 2: Plot showing the different hard X-ray continuum components for a representative situation, with a mixture of emission from a thermalized plasma at 2.0 x 107 K and a non-thermal component inferred from the RHESSI observations of the flare of April 14, 2002. Note that the non-thermal free-bound component dominates at some energies.

In certain flaring regions, especially in dense and hot coronal sources, or occulted loop-top events, fast electron recombination can be of vital importance in analyzing data properly and in inferring electron spectra and energy budgets. To fit a photon spectrum, fewer electrons are needed than in modeling where only free-free interactions are considered. This is increasingly important at low electron energies that may contain most of the flare energy. For example, in the case of an electron power-law spectrum with an index of -3 and a low energy cutoff of 10 keV, with ionization up to Fe XXV, the inclusion of free-bound interactions increases the photon flux (J) by a factor of 2-10 in the 15-20 keV range. This means that we may need only 10-50% as many electrons compared to estimates where free-bound interactions are ignored. Including free-bound interactions can also have a major influence on the inferred shape of the electron spectrum. Clearly recombination should not be ignored in future RHESSI data analysis when hot regions are involved. There should be smaller effects in the more ordinary "cold thick target" events, as opposed to the coronal event we have shown, but these remain to be explored in detail.

John Brown is a RHESSI Co-I, Regius Professor of Atronomy in Glasgow University, and Astronomer Royal for Scotland. Procheta Mallik is a first-year PhD student at Glasgow University. Brian Dennis helped substantially with this nugget - he is a solar physicist at NASA's Goddard Space Flight Center, and is the RHESSI Mission Scientist.