The temperature of the solar corona is around 2 million degrees, much larger than the 6,000 degrees of the Sun's photosphere. Although this counter-intuitive phenomenon was discovered more than 70 years ago (Ref. [1]), it has yet to be understood. Observations with the Extreme Ultraviolet Normal Incidence Spectrograph (EUNIS) sounding rocket instrument during its 2013 flight now have provided strong evidence for "nanoflare heating" as the explanation (Ref. [2]).

According to the nanoflare heating model the Sun's million-degree corona is produced by numerous tiny impulsive heating events, none of which can be observed individually by present-day instruments. Each heating event raises the local temperature to around 10 million degrees, comparable to what is observed during solar flares. The term "nanoflare" just means that each individual event would have an energy of order 10-9 of the energy of an ordinary flare, according to Parker's original estimate. The newly-heated plasma would cool quickly and the individual heating event would be short-lived. The combination of many such events thus can produce small but widely distributed amounts of plasma at flare-like temperatures. The only way to clearly, unambiguously detect the presence of this plasma is with a spectrometer that observes emission lines from ions that are formed at those large temperatures. Because the amount of material at flare-like temperatures is expected to be small, its emission is expected to be faint. In summary, the detection of faint emission from this flare-like material would be the "smoking gun" of the nanoflare heating explanation for coronal heating (Ref.[3]). 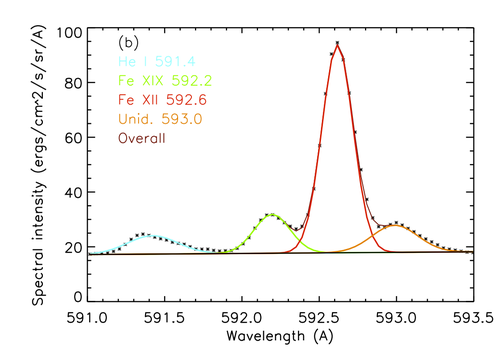 Fig. 1: Line profiles of Fe XIX 592.2 and Fe XII 592.6 A averaged over a large quiescent area in an active region observed by the EUNIS sounding rocket on 2013 April 23. All four emission lines in the displayed spectrum are well resolved by EUNIS.

Because its detectors were cooled, EUNIS had the sensitivity and dynamic range needed to measure these relatively faint lines throughout the observed area on the Sun. This unique capability is what enables EUNIS to map an active region in these emission lines, unambiguously revealing that material at 8.9 million degrees covers nearly 2/3 of the active region's area (Figure 2). This broad distribution of hot plasma provides strong evidence for the nanoflare heating model of the corona in this active region. 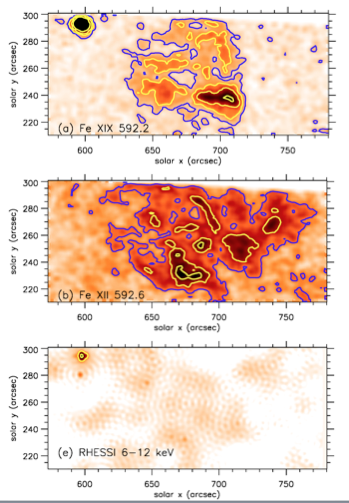 No GOES events occurred in the region less than 2 hours before the rocket flight, but a microflare was observed north and east of the region with RHESSI and EUNIS during the flight. The absence of significant upward velocities anywhere in the region, particularly at the location of the microflare, indicates that the pervasive Fe XIX emission was not propelled outward from the microflare site, but is most likely attributed to localized heating (not necessarily due to reconnection) consistent with the nanoflare heating model of the solar corona. We measure average Fe XIX/Fe XII intensity ratios of 0.070 outside the AR core, 0.22 in area of bright coronal emission (the area in which the Fe XII intensity exceeds half its maximum observed value), and 0.55 in the region's hot core. Using the CHIANTI atomic-physics database and assuming ionization equilibrium, we estimate corresponding Fe XIX/Fe XII emission measure ratios of about 0.076, 0.23 and 0.59. The emission measure ratios must be viewed with caution in light of lingering uncertainties in the Fe XII contribution functions.

The next EUNIS flight, to occur early in 2016, will again observe the Fe XIX 592.2 and Fe XII 592.6 A lines. In addition, the newer version of EUNIS will include a spectral channel to observe the bright line of Fe XVIII at 93.9 A, formed at temperatures near 7.1 million degrees, as well as other lines formed at temperatures between 4 and 10 million degrees. These observations may provide more conclusive support for the nanoflare theory of solar coronal heating. EUNIS is supported by the NASA Heliophysics Division through its "Low Cost Access to Space" program.