The solar flare has been understood as essentially a magnetic phenomenon, powered by the free energy accumulated and released in the coronal magnetic field. The buildup of this coronal free energy appears to be driven by the evolution of magnetic field in the photosphere, as traced by magnetic flux emergence and surface flows. For example, the long-term rotational motion of sunspots (about a few degrees per hour), which can in principle braid and twist the coronal field, has been observed to precede flare occurrence. Generally, in almost all contemporary solar eruption models, the photospheric boundary of field is forced to be line-tied, and horizontal motion is assumed to be zero. Thus by construction these models cannot address flare-induced sunspot motions, which were considered implausible (the "tail wagging the dog") but nevertheless reported in two previous studies (Refs. [1, 2]). Due to image resolution, however, a detailed description of the spatiotemporal relationship between the flare emission and the sunspot motion has been lacking.

In this Nugget, we review the appearance of an impulsive rotation of a sunspot with related to the flare SOL2015-06-22T18:23 (M6.5) (Ref. [3]). The unprecedented detail of this observation was made possible by the use of images (in TiO and H-alpha), with the highest resolution (~60 km) ever achieved, and at rapid cadence (15 and 28 s, respectively). These wavelengths show us the photosphere (TiO) and the chromosphere (H-alpha), respectively. The new flare observations were made at the recently commissioned 1.6 m New Solar Telescope (NST) of Big Bear Solar Observatory (BBSO). The large telescope aperture and the implementation of high-order adaptive optics with speckle image reconstruction allowed us to obtain excellent observations of this event (Fig. 1).

Figure 1: BBSO/NST TiO (a and b) and H-alpha + 1 Å (c) images superimposed with arrows representing flow motions in TiO (adjusted for the pre-flare flow field) and white curves delineating the co-temporal H-alpha + 1 Å ribbon front at two times, between the first and second (a) and second and third (b and c) main peaks in Fermi 25-50 keV hard X-ray light curve. The over-plotted circles C1 and C2 are for constructing the space-time slice image shown in Figure 2. The times of the three main hard X-ray peaks I-III are also denoted in Figure 2.

Non-uniform sunspot rotation during the flare

The essential goal of this study is to disentangle the spatial and temporal relationship between the observed sunspot rotation and flare emission. Figure 1 shows the comparison between the photospheric flows (within the regions of two sunspot umbrae f1 and f2), which are derived with the "differential affine velocity estimator" (DAVE) method developed by P. Schuck, and the location of the front of the flare H-alpha ribbon at two different times. We see that as the flare ribbon (mainly its northern part) sweeps through from west to east, a clockwise rotation starts from the northwestern portion and then develops through the entire f1 and f2. We further compute the flow vorticity based on the derived velocity vectors, and find that the development of regions of intense negative vorticity (corresponding to a clockwise rotation) follows the flare ribbon motion and concentrates on the portion swept by the ribbon. More dynamic details can be seen in the movies accompanying ref. [3]. 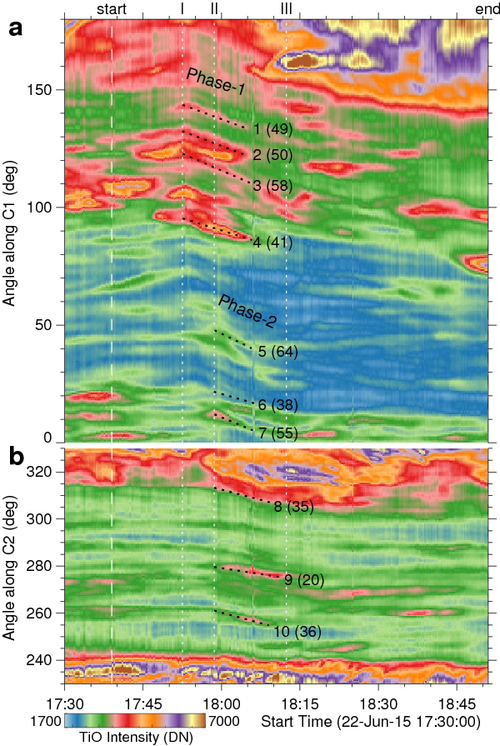 Figure 2: Space-time slice images in the TiO band re-mapped to a polar coordinate system. Panels a and b show the result at a constant radius along C1 and C2 shown in Figure 1, respectively. The black dotted lines trace several distinct features 1-10 by a linear approximation. The numbers in brackets are the corresponding angular velocities (in degrees per hour) from the linear fit. The vertical dashed lines mark the start and end times of the flare in GOES 1.6-12.4 keV soft X-ray flux, and the dotted lines mark the three main Fermi/GBM 25-50 keV hard X-ray peaks I-III.

In Figure 2, we remap TiO images to a polar coordinate system, and trace several distinct features of the umbra f1 for a precise determination of the timing relationship between the sunspot rotation and flare emission. It can be seen that the northwestern portion of f1 (as represented by features 1-4) starts rotating right after the first main hard X-ray peak I, at a mean angular velocity of 50 degree per hour. Later, the southern and eastern portions of f1 (as represented by features 5-7 and 8-10) begin rotating immediately following the second main hard X-ray peak II, at a mean angular velocity of 52 and 30 degree per hour, respectively. After the third main hard X-ray peak III, the rotational flow diminishes, as reflected by the observation that the drifting features nearly flattens. Nevertheless, f1 shows overall westward and southwestward flows, and it continues to rotate clockwise as a whole until ~20 UT.

Our observations clearly demonstrate that the sunspot rotates, in a progressive and nonuniform manner. The rotation has speeds up to about 10 times faster than that of the reported pre-flare spot rotations. It follows the flare emissions; this rotation does not precede the flare. Using vector magnetic field data from SDO/HMI, we also analyze the Lorentz-force change exerted at and below the surface by coronal magnetic field from above, which is attributed to the restructuring of coronal magnetic field in the back-reaction theory (Ref. [4]). We show that the density map of the horizontal component of the Lorentz-force change forms a rotational pattern similar to that of the rotating flows, and the resulted torque may drive the sunspot rotation. Furthermore, we assess the evolution of Poynting flux transported through the photosphere, based on photospheric plasma flows derived using the DAVE for vector magnetograms method. The result shows a downward Poynting flux during the flare time interval, which could be the energy source driving the photospheric motion. These point to a physical process associated with the sunspot rotation that contrasts with that in the non-flaring period. Taken together, we conclude that that the observed sunspot rotation on the photosphere is a result, not a cause, of the flare magnetic reconnection in the corona, which challenges the conventional view of the photosphere-corona coupling during flares.

[2] "Sudden Photospheric Motion and Sunspot Rotation Associated with the X2.2 Flare on 2011 February 15"

[4] "Global Forces in Eruptive Solar Flares: The Lorentz Force Acting on the Solar Atmosphere and the Solar Interior"