According to prevailing views, solar flares consist of huge magnetic explosions that take place in the solar corona. One main signature of flare occurrence is the acceleration of many particles (electrons, protons, and other ions), which then travel along the coronal magnetic fields. Solar hard X-ray sources thus typically show us the footpoints of coronal magnetic loops, as the accelerated electrons penetrate into a deep enough layer to emit bremsstrahlung photons.

The hard X-ray domain is therefore not where one would think of finding diagnostics of coronal magnetic fields, but the shape and cross sections of the flare loops that guide the accelerated electrons contain useful information about magnetic fields not obtainable in any other way. One example of such information comes from hard X-ray observations of the footpoints of flare loops, visible as elliptical features in flare images at energies where thick-target emission dominates. It has been known for over a decade, largely from HXT, but also radio, that footpoint fluxes are seldom equal, and that asymmetry is the rule rather than the exception. It is possible that the asymmetry is just due to an asymmetric injection of high energy electrons, but there are new RHESSI observations that seem to favor a symmetric injection.

Back in 1979, before hard X-ray imaging became a reality, Melrose and White (Ref. [1]) presented a trap/precipitation model that suggested that the flux asymmetry of hard X-ray footpoints in flaring loops would be caused by a magnetic asymmetry. In this model, magnetic convergence at the footpoints should mirror a fraction of streaming and spiraling electrons (green spirals in the figure below), and for electrons with small pitch angles (i.e moving more parallel to the magnetic field), where the mirror point lies in the chromosphere, hard X-ray emission would be emitted from regions whose area was that of the trapping magnetic flux tube. 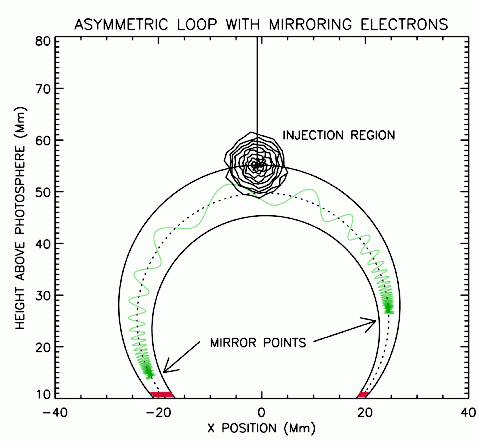 Figure 1. Cartoon of trap/precipitation model for an asymmetric flux tube. A particle orbit is shown in green, and the loop footpoints in red. The magnetic field is stronger at the right footpoint.

The trap/precipitation scenario led many HXT workers to compare hard-X-ray footpoint flux ratios with magnetic fields determined from magnetograms. Taro Sakao, in 1994, devoted part of his PhD thesis to this subject and found that out of 5 flares that he studied, the footpoint with higher magnetic flux (B) was weaker in hard X-rays. This was a vindication of the trap/precipitation model. Later HXT studies, e.g. by Goff et al. in 2004, came to a different conclusion, though. Out of 32 flares, Goff et al. found that only 14 showed the low-B, bright X-ray association. All of these studies suffer from the fact that the magnetic fields are only measured at the photospheric level, rather that at the chromospheric level where the hard X-rays were emitted. Also, with two different instruments, one has different cadences, resolutions, and pointing systems. So if hard X-ray imaging could determine the area of the footpoints, the asymmetry in both flux and area (inverse magnetic field) could be seen without ambiguity. Unfortunately this was not possible with HXT, nor, until recently, with RHESSI.

A new method of imaging

In early 2006 it became possible to make quantitative source-area measurements with RHESSI data. The new method makes use of visibilities (see our Powerpoint file for full details). The visibilities are the calibrated amplitudes and phases of the modulation profiles (we intend to discuss visibilities in a future nugget). To apply visibilities to imaging, one makes an image model with adjustable free parameters. A Fourier transform then provides model visibilities which can be compared with the observed visibilities. The free parameters are adjusted until a good (or the best possible) fit is obtained. This "visibility forward fit" technique is very fast - faster than the Clean algorithm - and provides error bars derived from the count statistics and the estimated hardware uncertainties, all fed through the nonlinear fitting process. Two examples of forward-fit maps are shown below, along with Clean maps for comparison. 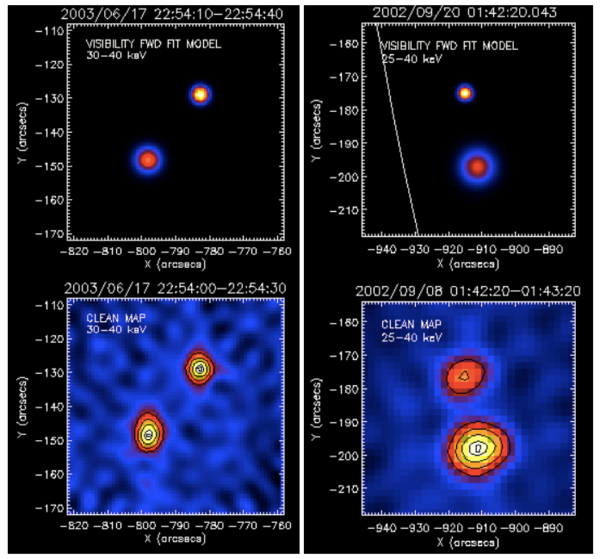 Figure 2. Visibility Forward-Fit maps (top) and Clean maps (bottom). These are two of RHESSI's imaging techniques. Here "forward" means assuming a model; the CLEAN approach does not require this but therefore allows the image fluctuations one sees in the background. For the flare on the right the white line shows the location of the solar lmb; the coordinates are relative to Sun center.

Some observed widths and fluxes

We have applied this new technique to compare footpoint areas and fluxes. Figure 3 shows our sample of 26 double-component events as source size (FWHM) plotted pairwise against source flux. This shows that the brighter component is also broader, as predicted by Melrose & White, in the large majority of cases (23 out of 26). Relatively small error bars give us confidence in the result. 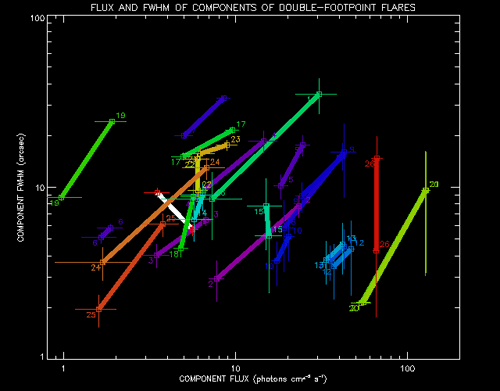 Figure 3. Flux and size of components in double-footpoint flares. The colored bars link the two footpoints for each event, and the preponderance of positive slopes shows the existence of a correlation.

Each colored bar represents a separate flare or flare interval, with squares at the bar's end showing the flux and size of that component. Crosses at the end of each bar show estimated 1-sigma errors in flux or size for each component. Note that the slope is positive for all but 3 bars; only one (white bar) of those is significant at the 2 or 3 sigma level.

We have found that the brighter footpoints are broader than the fainter conjugate footpoint in 23 of the 26 flare intervals studied. This is shown by the predominantly positive slopes of the line segments joining the footpoint parameters (flux, size) in the above figure. This result validates the Melrose and White prediction, and it is in general agreement with Sakao's result, although the width-flux correlation is better (23/26) than his magnetic field-flux correlation (4/5), and significantly better than Goff et al's result (14/32). The possibility of an asymmetric injection as an explanation for flux asymmetry now seems to be unlikely on the basis of this strong correlation of footpoint flux and area, since if the injection were highly asymmetric in a random way, the correlation would be close to zero.

It is also possible to draw conclusions from these width-flux asymmetries regarding the pitch angle distributions and the loss-cone angles, but that's another story to be told later.

Without Gordon Hurford's invention and implementation of RHESSI visibilities, this work would have been hugely difficult if not impossible. We also must credit him for the new visibility forward-fit method, which has many potential applications for indirect imaging by RHESSI.

Ed Schmahl is a senior RHESSI researcher at the University of Maryland, and Rick Pernak is a junior one (a beginning graduate student) at the Catholic University of America.