Solar flares copiously accelerate particles, and as discussed in earlier Nuggets, the electrons in the impulsive phase may carry most of the initial energy release from the magnetic field. Our detailed knowledge of the nature of this acceleration is quite limited, but the bremsstrahlung mechanism offers two important and little-exploited characteristics: linear polarization and directivity of emission. In this Nugget we discuss the first really good opportunity to study the latter property, the directional signature, with the most direct means: stereoscopic observations.

While RHESSI is taking data, its successor STIX, is being readied to fly on Solar Orbiter. This instrument, like RHESSI, will provide hard X-ray imaging spectroscopy (4 to 150 keV). Most importantly, it will view the Sun from a quite different direction than near-Earth instruments; Orbiter will definitively leave Earth orbit and even rise above the ecliptic plane.

What will observe the Sun simultaneously, from near Earth, to complete the stereo pair (Figure 1)? MiSolFA, a very compact detector now in early development, could do the trick. Together, STIX and MiSolFA will be able to provide a quantitative measurement of the X-ray anisotropy by employing the same photon detectors, in order to minimize the systematic uncertainties related to cross-calibration issues. This problem has plagued earlier efforts at hard X-ray stereoscopy, which had to make use of disparate measurements (Ref. [1]). 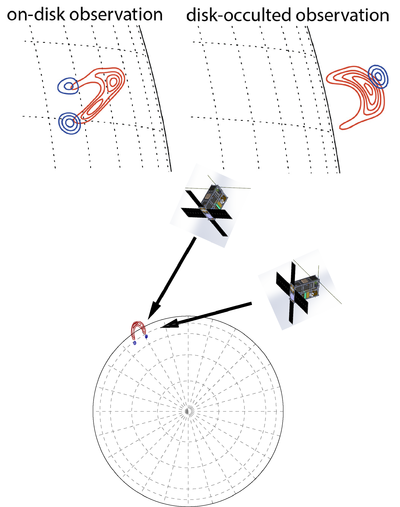 Figure 1: Sketch of the flare hard X-ray stereoscopy, loosely based on RHESSI observations of SOL2005-01-20 (in only two dimensions).

Bremsstrahlung emission is inherently anisotropic. The cross-section has a dipole pattern for nonrelativistic electron energies, and rapidly becomes preferentially in the forward direction for hard X-ray emission energies. Hence, any net flow of electrons along a well-defined direction (a beam) should correspond to an anisotropic X-ray distribution. As some beaming is naively expected in standard flare models, it is surprising that so far no striking evidence of X-ray directivity has yet been acquired.

A second source of directionality comes from the "mirroring" (or albedo) of X-ray photons caused by Compton scattering on electrons in the chromosphere. The scattered photons compete with the primary flux directed along the line of sight, and this combination varies with viewing angle. This albedo contribution is almost simultaneous and has a strong spectral signature, peaking in the 20-70 keV range. This means that extracting information about the primary electron beam is a non-trivial task that involves unfolding of albedo effects, in addition to the usual inverse problem relating the measured X-ray spectrum to the "true" total photon spectrum. A further model complication comes from the tendency of electrons to scatter as they propagate, depending on the density of the medium, which will diminish these beam signatures. An earlier Nugget describes these matters with the analogy of a dentist's mirror - in principle the albedo component allows us to study otherwise invisible emissions, namely those emitted in the forward direction towards the Sun.

MiSolFA is as close as possible to STIX, for what concerns the energy measurement. Indeed, its design is based on the same photon detectors and front-end electronics as STIX, with the necessary changes to fit the instrument into a much smaller volume (the baseline satellite is a 6-unit Cubesat).

The stereoscopic meaurement is likely to be limited in its precision by systematic effects. These include the different effective areas and the fact that STIX will generally be closer to the Sun, and the two instruments will necessarily have somewhat different layouts. The flux comparisons will depend upon flare properties (spectral and spatial distributions, time variations, pile-up corrections). Other effects may be flare-independent (energy-dependent attenuation, energy resolution and gain mismatch, and different background counts).

In addition, it is not always possible to observe the same event. As Solar Orbiter spends a significant fraction of time viewing the opposite side of the Sun [the "dark side of the Sun" :-) ], about half of the flares observed by STIX won't be measured by MiSolFA. In addition, the observing times are not 100%. For example, STIX will be in science mode for about 20% of the time, and a reasonable estimate for the lifetime of a near-Earth orbital instrument is close to 50%. A conservative estimate for the total time of simultaneous observation by both instruments of the same portion of the Sun is 5-10%, which amounts to 2-4 months during 3 years.

Current studies show that energy-dependent signatures related to different viewing angles may be detectable with flares of GOES M and X class. The useful energy range goes from the end of the thermally-dominated region until the background-dominated region, where the counts due to high-energy photons are not much larger than the background counts. This spectral range depends on the flare observed. For example, an X-class flare is expected to have higher counts in the high-energy region, but at the same time its thermal component extends to higher energy than softer flares. On the other hand, the non-thermal spectrum is visible at lower energies for M-class flares, but it might produce not enough counts at high energy (one should not forget about the variability of the spectral index too). From the statistical point of view, one expects to get few tens of useful flares during solar maximum, which means that there is a good chance to observe several "good" flares with both instruments.

Solar X-ray emission has inherent directivity, but it has not yet been very well studied. We know of useful information embedded in this property, but indeed we are likely to be surprised by what we see. STIX will lead the way by going into deep space, and MiSolFA can provide its stereoscopic complement.