In the accepted picture of the magnetic activity of the solar corona, free energy gradually accumulates in the coronal volume via body currents, expressed as geometrical twist within the magnetic field. Magnetic twist in the solar corona can thus be a key factor in many phenomena, from flares and eruptions to loop oscillations and coronal wave propagation. The instability of a twisted coronal loop has been invoked by many as a viable mechanism for fast energy release and solar flares (e.g., Ref. [1]). Such an instability would be particularly attractive in explaining "failed" eruptions and flares in small isolated loops. Furthermore, with the reconnection and energy release locations evenly distributed within the loop volume, they are also attractive as particle accelerators [2].

In order to investigate the role of magnetic twist in coronal events we need to be able to detect it. The EUV and soft X-ray emission from thermalized plasmas captured in coronal magnetic flux tubes ought to reveal some visible twist. Flares create hot plasma, and its emission can thus be used for twist detection; however, this hot plasma appears only towards the end of the impulsive phase, when the twist can be substantially reduced. The hard X-ray emission produced by non-thermal electrons in a flaring twisted loop could reveal its presence by structurally changing the X-ray sources [3]. This generally is an ambiguous signature, though, and in any individual flare this feature alone cannot be used for twist detection. Hence the question of twist detection, particularly during the early stages of a flare, remains open.

Gyrosynchrotron emission produced by energetic electrons is sensitive to the magnetic field direction: it is left- or right-polarised depending on the sign of the line-of-sight magnetic field. This effect is often observed as opposite polarisations of microwave emission coming from opposite footpoints of coronal loops. Therefore, gyrosynchrotron circular polarisation might be used to determine the sign of the line-of-sight magnetic field component and, hence, to detect the twisted magnetic fluxtubes in the corona.

The sketch in Figure 1 provides a graphic description of this method. A magnetic flux-tube that is regularly twisted (panel a), when viewed from its side, will show oppositely-polarised upper and lower parts (panel b), a pattern called cross-loop polarisation gradient (CLPG). A twisted flux-tube viewed from the top also demonstrates the CLPG pattern. Ideally, the line separating two polarisations will run as a diagonal, crossing loop's mid-plane as shown in Figure 1b (upper part). However, in reality, the visibility of the CLPG pattern can be affected by many factors, from loop temporal evolution to the optical thickness of the generated microwave emission. In order to evaluate viability of GSMW polarisation for magnetic twist detection in the corona, we calculate synthetic maps of polarized microwave emission (Stokes I and V) produced by hot plasma and energetic particles in an evolving twisted magnetic loop following a kink instability followed investigated using MHD/test-particle simulations [2]. Electron energy spectra are taken from the test-particle simulations and approximated by a single power-law

Figure 1. Panel a: a magnetic loop with regular twist, green lines/arrows show magnetic field and its direction. Panel b: the scheme of circular polarisation of optically-thin GSMW emission produced by energetic electrons in a twisted loop observed from the top (upper sketch) and from the side (lower sketch).

The GX Simulator allows us to synthesize the model loop's microwave image properties, as shown in the animation of Figure 2.

Figure 2. Microwave emission from a twisted loop with nearly contant cross-section at the beginning of the impulsive phase. The foot-point magnetic field is 320 G, loop plasma temperature about 18 MK, non-thermal electron density at the loop axis is about 4x107cm-3, and non-thermal electron spectrum a power law with index 1.4.

Figures 3 and 4 then show snapshots of models with different magnetic field configurations. We find the emission to be optically thin at frequencies above the spectral peak frequency, which varies between 2-20 GHz (depending on the beam spectral index). At the optically-thin frequencies, CLPG patterns can be seen near loop-tops when observed from the top, and along a whole loop when observed from the side. However, in the strongly converging loop (Figure 4), the foot-points are much brighter than the loop-top, which may reduce the CLPG pattern visibility. At the optically-thick frequencies the gradient of Stokes V across the loop can still be observed; however, it has a more complicated structure which would be difficult to interpret. 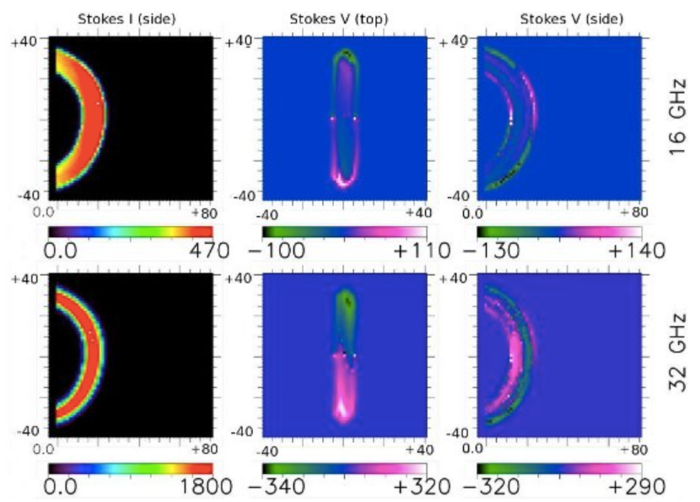 Figure 3. Microwave emission from a twisted loop with nearly contant cross-section at the beginning of the impulsive phase. Foot-point magnetic field is 320 G, loop plasma temperature is about 18 MK, non-thermal electron density at the loop axis is about 4 x 107cm-3 electron spectral index is 1.4. 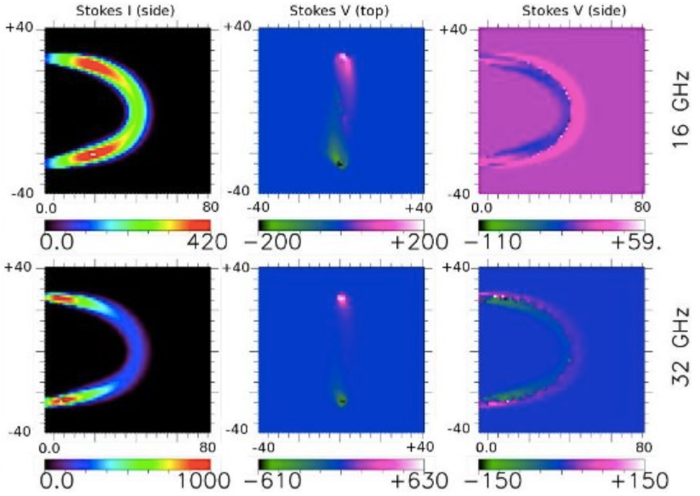 The CLPG patterns are best visible just after the onset of magnetic reconnection. As the reconnection progresses and the twist reduces, it becomes more difficult to observe the pattern in loops viewed from above. The polarisation gradient fades and the patterns become more complicated due to the optical thickness effects and because the loops lose their rope-like structure. Overall, the CLPG structure can be observed for about half of the impulsive phase (i.e. for up to 30-40 s in our simulations), although it depends on the loop geometry and the viewing angle. Firstly, CLPG pattern is visible longer in loops observed from the side (compared to loops observed from the top). Secondly, loops with constant cross-section demonstrate CLPG for a slightly longer period of time. This is because strongly-converging loops lose their rope-like structure faster because their field quickly becomes more chaotic.

Based on our synthetic microwave maps, we can conclude that the cross-loop polarisation gradient can be used to detect twisted loops, provided that the loop width can be resolved; the patterns can be observed for the first half of the fast energy release phase (an impulsive phase in a flare), which is about 30-40 s long in a 80 Mm loop with typical coronal parameters. The best visibiliity is in the optically thin emission above the peak frequency. Depending on the model parameters, this frequency in our models is between 2 and 20 GHz.

We note that our electron beams are quite hard, with spectral indices 1.5-3.5, compared to the values 3-7 often deduced from observations This results in larger numbers of electrons at higher energies and, hence, higher gyrosynchrotron intensities. More importantly, because of this, the spectral maximum appears at higher frequencies.

We also need to note that the pitch-angle distribution noticeably affects the properties of the emission, simply due to the fact that gyrosynchrotron emission is beamed along magnetic field. A "loss-cone" distribution (pancake-like) with large perpendicular velocities will produce emission spectra similar to those considered here, for which we have assumed an isotropic distribution. Such strongly collimated pitch-angle distributions typically produce complicated emission spectra, which can make the detection of our CLPG signature more difficult.