Since Eugene Parker's coinage of the term "nanoflare" in his seminal paper on stick-and-slip energy release in magnetized plasmas (Ref. [1]), a certain degree of confusion has prevailed. Did this term refer to the energy of an event (pegged at 10-9 of a regular flare), or did it require different physics? Certainly regular flares have a broad distribution of energy-release magnitudes, limited probably only by our ability to detect fainter and fainter X-ray bursts. But regular flares have an occurrence distribution that favors the more powerful events; these produce energy in discrete locations well-separated in time and space. Thus their aggregation simply cannot explain a large-scale, smooth, time-stationary structure such as the corona. We would need a much more widespread distribution (in apace and time) of tiny events to do that. So, how do we distinguish a very weak but otherwise normal flare, from a comparably weak but physically different nanoflare?

To clarify this distinction, we hereby introduce the term "minoflare," echoing perhaps some of the fishiness that has arisen. A minoflare shares the physics of regular flares: powerful particle acceleration, the elevation of chromospheric material up into the corona; in the most exciting cases, a CME.

Figure 1 sets out the basic scheme we have in mind. 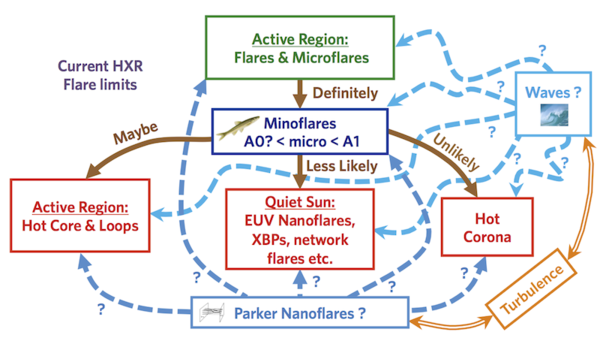 Figure 1: The basic scheme of flares, microflares, minoflares, and (maybe) nanoflares in the web of explanation of solar transient events. Note the liberal appearance of question marks and cartoons!

If we could detect a true nanoflare, how would we know we had done that, and not just confusedly reported a minoflare? This is not an easy question to answer, since the essence of Parker's nanoflares is that they blur together and should not be recognizable individually. (Equally small-scale wave heating or turbulence might be physically distinctive from the nanoflaring process but their collective effect could produce heating signatures indistinguishable from nanoflares.) Accordingly, we must seek statistical confirmations of their existence. One such clue might be in a difference between minoflares and nanoflares as regards particle acceleration. Minoflares, as flares, would mainly accelerate non-thermal particles as they suck energy out of the magnetic field. It might be the case that nanoflares would not do this so well, and only gently warm the plasma in a thermal sort of manner. In such a case the RHESSI hard X-ray signature might drop off, relative to the GOES soft X-ray (thermal) signature as we burrowed down into the domain of the weakest events. Figure 2 shows an inconclusive search for such an effect; one view of the correlation (the left panel) suggests that there is no distinction; a more sophisticated correlation (right panel) suggests that there might be. Here "sophisticated" means that the data have been massaged by model assumptions. The "CTTM non-thermal energy" assumes a particular model for the generation of hard X-rays, and deduces an energy from that model. Such an approach sometimes obfuscates the true relationships of the phenomena being studied. 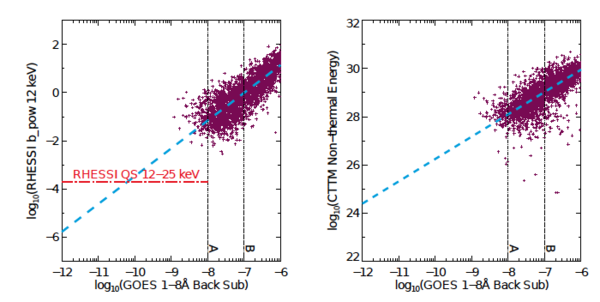 Figure 1: Correlation of non-thermal output from flare-like events: left, the RHESSI and GOES data; right, an inference of energy in the thick-target model (derived from the RHESSI signatures) also compared with the GOES thermal energy.

We propose a new term ("minoflare") to aid researchers in making the distinction between flares and something else. At present we have no definitive way of distinguishing these possibilities, but we certainly look forward to FOXSI and NuSTAR observations, which will probe into entirely new domains in solar X-ray parameter space. These explorations may well resolve this issue.

[1] Nanoflares and the solar X-ray corona