For decades we have known that soft X-rays from solar flares lag behind the nonthermal signatures in flares, such as hard X-rays or microwave emission. This is often called the Neupert Effect after Werner Neupert, the NASA solar physicist who (in 1968) first noted this relationship. There is little controversy about the interpretation: it simply takes some time to heat the coronal plasma or to fill up coronal flare loops with newly heated chromospheric plasma, according to the "chromospheric evaporation" model. Nevertheless, because the data are not complete and theory is far behind, one still finds controversy about the meaning of the Neupert effect.

RHESSI, with its marvelous and unprecedented energy resolution, can give us the many light curves in the thermal regime, from 3 keV up to about 20 keV, with a spectral resolution of about 1 keV and great sensitivity. Such data are ideal for characterizing timing between nonthermal and thermal emission. In essence, we expect that peak times of soft X-ray light curves (say, at energies below 20 keV) will be delayed relative to the nonthermal peaks (say, above 30 keV; in detail this distinction depends on circumstances). Here we are assuming the standard model in which hard X-ray emission is produced by high-energy electrons "precipitating" from the corona. These heat the chromosphere, which then flows upwards as a result of the overpressure developed by this heating. The heated plasma flows into the coronal parts of magnetic loops, and is observable as the rise in the soft X-ray emission. However, what physics can we learn by measuring these thermal delays? Is the thermal delay controlled by the upflow speed, by the filling time of coronal flare loops, or by cooling times? We do not yet have a good theoretical understanding of the plasma physics of these processes, unfortunately, but observations can help.

We undertook a statistical study of some 100 RHESSI flares and could identify a thermal delay in almost all flares at energies of 10-20 keV with respect to >30 keV energies. Generally, we found that the thermal delay is largest at the lowest energies and systematically decreases with higher energy, until it asymptotically reaches zero with respect to the nonthermal peaks at higher energies of >30 keV. Hard X-ray spectra have often been fitted with a 2-component model: a thermal (near-exponential) function plus a nonthermal (piece-wise powerlaw) function, often yielding a reasonable fit. Now, looking at the thermal delays, we see that they pretty much coincide with these two spectral domains: large delays where the thermal spectrum dominates (say <20 keV), and no delays where the nonthermal spectrum dominates (say >30 keV), and a gradual transition in between. However, an interesting detail is that the delay does not converge to a constant in the thermal domain, but decreases more and more towards lower energies. We would expect that a thermal plasma with a single temperature would have a single well-defined cooling time. So, the fact that the thermal delays decrease with decreasing photon energy seems to be a manifestation of the inherently multi-thermal nature of flare plasma.

In order to quantify the multi-thermality of the flare plasma we introduce a spectrum that is composed of a number of isothermal spectra, with decreasing emission measure as a function of higher temperatures. Figure 1 shows such a multi-thermal spectral model: blue components indicate lower temperatures (15-25 MK), and yellow components indicate the hottest temperatures (40-50 MK). In the superposition we see that a cooler temperature of about 15 MK dominates the hard X-ray photon spectrum below 4.8 keV, while the hottest component 50 MK dominates the hard X-ray photon spectrum at 22 keV. Therefore, the spectrum in the 5-20 keV range acts like a temperature filter. RHESSI, with its 1 keV spectral energy resolution thus provides us about 15 independent temperature "channels" in the range 5-20 keV, and we can measure and model the delays of each temperature component separately. 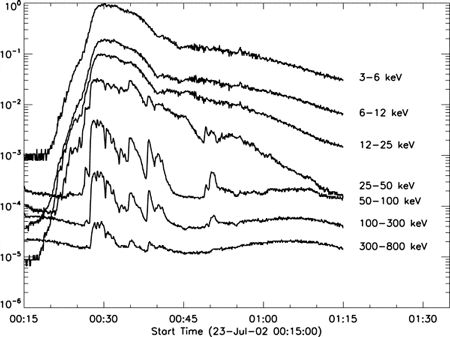 Figure 2: Figure 1. Model X-ray spectra from multithermal plasmas, showing how different temperature ranges map onto the spectrum, such that each independent spectral measurement can characterize a specific temperature range in the plasma.

The cooling of a flare plasma is controlled by two processes: conduction and radiation. Earlier studies, of the Bastille-Day flare for instance, have shown that conductive cooling is dominant in the early hot phase, at temperatures above 10 MK, as seen in soft X-rays, while radiative cooling dominates in the late cooling phase as temperatures below 2 MK as seen in the extreme ultraviolet. We expect therefore that cooling by thermal conduction is dominant for the temperature range above 15 MK. The conductive cooling time has the following dependence on the flare density ne, loop length L, and temperature T:

From this expression we immediately see that the conductive cooling time goes with a negative power (-5/2) of the temperature, which means that hotter plasma cools faster. This explains the observed effect that the thermal delay decreases with higher temperature (in the thermally-dominant spectral domain). We note that the transition from the thermally-dominant spectrum to the nonthermal part (with no delay) causes an additionally decreases the delay.

Our fits to the data include both of these effects, as shown in Figure 2. The light curves from 11 to 50 keV are shown in the top left, where the delayed peak at lower energies can be seen by eye, and is also shown in an enlarged time window at the bottom left. The spectrum can approximately be modeled with a superposition of a nonthermal powerlaw function and a multi-thermal powerlaw function (Fig. 2 top right). Using these spectral fits we see that the spectrum is dominantly thermal at energies below 16.6 keV (where the cross-over of the thermal and nonthermal powerlaw functions occurs), then there is a transition to a purely nonthermal spectrum that dominates above 30 keV. Using this two-component weighting we can then fit the predicted energy- dependent multi-thermal delay as function of the observed photon energy (Fig. 2, bottom right) and find an acceptable fit (with a chi-square of 1.1) for the 20 delay datapoints at energies between 11 and 50 keV. A single-temperature model yields a significantly worse fit, and thus the energy-dependent time delays are a more powerful constraint than the spectrum itself; this spectrum could possibly also be reasonably fit to a combination of a single-temperature thermal plus multiple powerlaw functions. 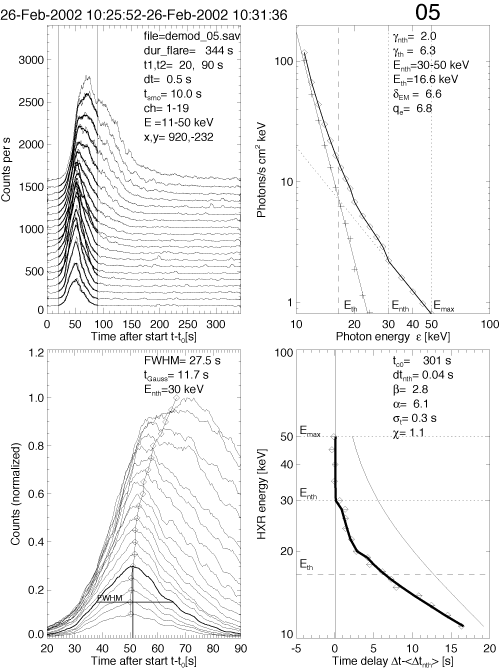 Figure 2: Figure 2. Time delays as a function of photon energy, for the RHESSI observations of SOL2002-02-26. Left, the normalized counts in narrow energy bins; right, the best-fit time delay as a function of the energy.

consistent with the theoretically expected value of -5/2 for conductive cooling. This statistical study therefore demonstrates the dominance of conductive cooling at flare temperatures above 10 MK, and provides a powerful diagnostic to separate thermal from nonthermal components, which is often ambiguous from spectral fitting alone.

Markus Aschwanden is a solar physicist and RHESSI team member based at Lockheed Martin in Palo Alto, California.