As described in Nugget 269, RHESSI began its 5th anneal cycle on February 23, 2016. The annealing process involves raising RHESSI's detectors to an elevated temperature close to 100 degrees C for about 10 days, during which the effects of accumulated radiation damage are significantly reduced. The data flow was turned off during the annealing operation but was restored starting on April 29, 2016. Since that time, each of the nine detectors have been turned on and their performance tested.

As a result of this evaluation, we have implemented a new default mode of operation. Starting on May 18 at ~1900 UT, only detectors 3 and 8 are kept on to allow the lowest operating temperature to be maintained while preserving RHESSI's core capability of X-ray imaging spectroscopy above 3–6 keV. Figure 1 shows images of the C1.3 event, SOL2016-05-24T10:20 that illustrate this capability. 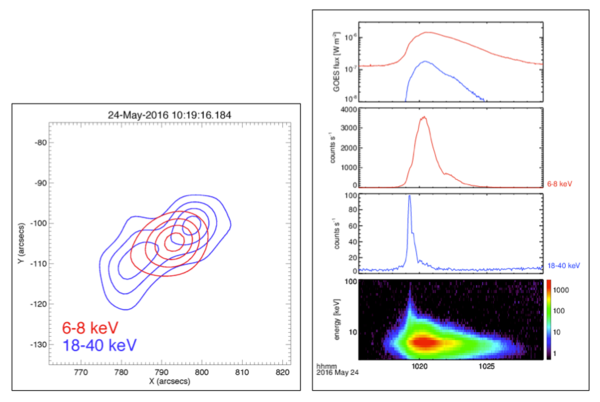 Another example confirms RHESSI's sensitivity to an even weaker event: the B3 flare, SOL2016-06-09T13:25, shown in the quicklook Browser. This is a nice microflare with type III radio emission.

The anneal successfully restored the operating performance of the nine detectors to the level that was anticipated. Four of the nine detectors retained their ability to segment, which allows them to have low-energy thresholds of ~3 keV and an X-ray spectral resolution of ~1.5 keV FWHM. The other five detectors are currently unable to segment, and thus have low-energy thresholds of >~15 keV and broader spectral resolution. These five unsegmented detectors have all had issues segmenting in the past, and experience has shown that some may regain segmentation at some future date. The following table shows the angular resolution and the segmentation status for the nine detectors.

Our default mode of operation to date has been to have all nine detectors on, but each detector that is on contributes an additional amount of heat into the cryostat. As the cryocooler ages, the detector temperature has continued to increase slowly. Figure 2 shows this via a plot of the detector "cold plate" temperature over the full lifetime of RHESSI from launch in 2002 to the present. The gradual increase results from the loss in efficiency of the cryocooler that is expected to continue indefinitely. The concern over the increasing detector temperature is two-fold: detector performance will deteriorate, and the cryocooler may exceed its operating limits. 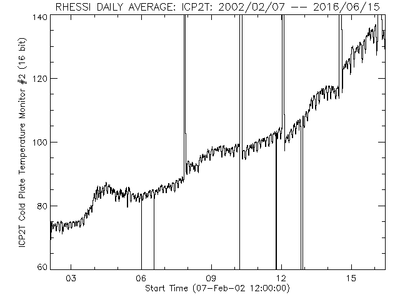 Figure 1: Plot covering the over-14-year lifetime of the mission showing the temperature in kelvin (K) of the "cold plate" on which the nine germanium detectors are mounted. The five large positive excursions are at the times of the five anneal operations to date. Much of the short-term fluctuation results from periodic variations in the spacecraft's day/night duty cycle.

To ensure that RHESSI will continue to perform its core function of hard X-ray imaging spectroscopy through the remainder of Cycle 24, our new default mode of operation is to operate only a subset of the detectors except during times of high solar activity or for special support activities. At the time of writing, only detectors 3 and 8 are on by default. As shown in Figure 1, this still allows us to obtain hard X-ray images, time series, and spectra as before, but the images have less (u,v)-plane coverage, limited to the range of angular resolutions at ~7 to ~106 arcsec. Users of RHESSI observations from this point on should be aware that for most of the time with low and moderate solar activity only two detectors may be operating.

We look forward to turning on additional detectors as activity warrants or to support specific observing campaigns, such as coordinated observations with following instruments:

RHESSI has returned successfully from its fifth annealing operation. We are again obtaining data but with a reduced number of operating detectors. While all detectors are operational with four fully segmented, we are limiting the number of detectors that are turned on at any one time in order to reduce the heat load on the cryocooler. In this way we expect to be able to maintain the detector temperature within the necessary operating range and retain the ability to turn on all detectors during any upcoming periods of high solar activity in Cycle 24. At present, we are operating detectors 3 and 8, which is sufficient for RHESSI's unique core mission of hard X-ray imaging spectroscopy.