The lack of routine observations of the solar spectrum, as it varies in many interesting ways, has always held back solar research. Now the new Solar Dynamics Observatory, launched in February 2010, is providing a 24/7 view of the the all-important UV/EUV part of the solar spectrum via its EVE instrument.

As seen in Figure 1, the EUV solar spectral irradiance is provided by the EVE instrument from 6-106 nm at 0.1 nm spectral resolution, providing many temperature, density, and energetic diagnostics of solar flares over a wide temperature range that covers chromospheric to hot coronal emission. The EVE observations of two GOES M-class flares, one compact and one two-ribbon, are the focus of this Nugget, demonstrating the observation capabilities of SDO EVE that are very complementary to RHESSI. 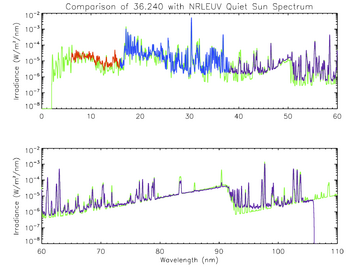 Figure 1: An example of a single solar EUV spectrum from the SDO EVE instrument. The red, blue, and purple lines are from the three different EVE optical channels, while the green line is a theoretical model.

The M2.0 flare that occurred on 2010 June 12 was a compact flare that had a very quick impulsive phase, perhaps due to magnetic reconnection in large single loop bundle to provide the energy release, quick heating, and subsequent cooling. The time series of many temperatures of bound-bound emissions (ie, individual spectral lines) are shown in Figure 2 (see the Appendix for an explanation of how such plots are constructed). The cooler emissions that form in the chromosphere and transition-region footpoints of the flaring loops (temperatures below about 105 K) show impulsive-phase enhancements that are due to collisional excitation by an electron beam in the dense, cooler emission plasma of this region, followed by spontaneous radiative decay. These impulsive-phase enhancements peak before the thermal-phase emission of the hot coronal plasma, agreeing with the standard flare theories of energy deposition and heating occurring in the footpoints. These emissions should be well correlated with the hard X-rays seen by RHESSI. The thermal phase then peaks with the hot coronal plasma (temperatures of order 15 x 106 K), followed by cooling shown as subsequent peaks of the emissions at characteristic temperatures back to pre-flare conditions within ~15 minutes. The strongly peaked impulsive phase and the peak and subsequent cooling of the thermal plasma support the theory that this compact flare had a single reconnection and energy release event for this flare. 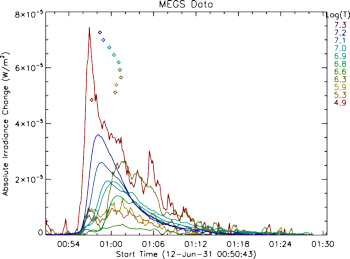 Figure 2: Flare plasma temperature evolution and absolute radiated emissions for the M2.0 compact flare on 2010 June 12. The diamonds show the peak emission time for the emission specified by the given color, and therefore the peak plasma temperature.

The M1.0 gradual flare on 2010 August 7 is an example of a two-ribbon event showing multiple energy releases as reconnection occurs along the flaring arcade, and a similar plot to Figure 2 is shown for this flare in Figure 3 (note the longer time range). Continuous particle deposition into the footpoints can be seen by the continuous emissions from the chromospheric and transition-region plasma. This more complicated impulsive phase is then followed by the thermal phase, with thermal emissions have a range of higher temperatures. Interestingly, those at the hotter temperatures (of order 107 K) increase at the same rate and at the same radiative energy output. The hottest emissions start to fall off first, at the same time as the impulsive phase, cooler emission peak. This shows the energy deposition rate, and therefore the heating of the plasma in the footpoints starts to fall off, and there is no more energy input to heat the thermal plasma so its emissions start to decrease. Emissions from the cooler plasmas continue to rise and then peak in sequence as the hotter plasma cools to these temperatures. All emissions cooler that about 7 x 106 K have almost simultaneous emission peaks at ~18:45 UT, with a curiously constant decrease in emission rates after this time for the rest of the cooling phase; all temperatures appear to have the same slope in the cooling phase.

Also observed in Figure 3 are the emissions in the temperature range below about 106 K, which reveal an anti-correlated decrease in emissions during the flare. This is either the coronal dimming due to the plasma at these temperature either being ejected out of the corona or, more likely, due to heating and ionization of the characteristic ions at these temperatures to higher ionization states, such as the FE IX emission at 171 A and peak contribution just below 106 K. 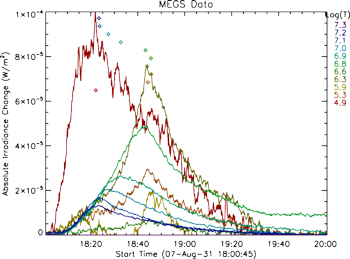 Figure 3: Evolution of plasma temperature and absolute radiated emissions for the M1.0 two-ribbon flare on 2010 August 7. The diamonds show the peak emission time for the emission specified by the given color, and therefore the peak plasma temperature.

Twenty four flares of GOES C2.0 and above have been observed so far since the launch of SDO, 14 of which were observed at various points in the flare evolution by RHESSI. RHESSI light-curves are available for the 2010 June 12 event, although it was not pointed directly at the flare and thus could not make images, while the 2010 August 7 event was sparsely observed by RHESSI due to orbit night or to increased background counting rates in the SAA. Future collaborative efforts of flare observations with both EVE and RHESSI will help derive aspects of solar flare energetics and plasma diagnostics that will help advance and complete the concept of a solar flare. This nugget focused on the EVE observations for those that are unfamiliar with the potential of the EVE observations, while the collaborative results of EVE and RHESSI observations will be a topic of another RHESSI Nugget in the near future.

Notes on 'waterfall' plot formation for those unfamiliar with these type of plots. SDO EVE measures the complete spectrum from 6-106 nm as seen in Figure 1 every 10 seconds at 0.1 nm spectral resolution. Within this EUV range each emission line is assigned a characteristic formation temperature that is the peak of the contribution function from the Chianti database. The time series of the spectrally isolated, unblended lines are then placed into temperature bins in the range from 6.8<log(T)<7.3 based on this peak temperature. The cooler emission bins are in various lot(T) ranges, with the given temperature label that corresponds to the various ranges:

Approximately 90 different ions are used to form this data set. Time series are then plotted of each of these log(T) bins on an absolute scale, with the 'pre-flare' value subtracted off; therefore, these plots show the timing and the absolute energy release at the various temperatures throughout the flare. The peak time of each emission temperature bin is also plotted as a diamond symbol, which more easily shows the peak flaring plasma temperature at a given time.

Biographical Note: Phillip Chamberlin is a Research Astrophysicist at NASA's Goddard Space Flight Center. He is the Deputy Project Scientist for SDO as well as a CO-I on the SDO EVE instrument. Tom Woods is the Associate Director of the Technical Division a the University of Colorado's Laboratory for Atmospheric and Space Physics (LASP), and is also the PI of the SDO EVE instrument.