As related in many of these Nuggets, particle acceleration figures prominently in the physics of solar flares and coronal mass ejections. We can observe these particles in the flare regions via their secondary X-ray and γ-ray emissions, and also in space more directly via the solar energetic particles (SEPs; "solar cosmic rays").

The relation between the number of accelerated protons and electrons is an important characteristic of these processes. The RHESSI observations are consistent with two (possibly concurrent) acceleration processes: one that accelerates electrons above 50 keV but not above 0.3 MeV (the first phase), and a second that accelerates both ions and electrons proportionally to high energies (the second phase) (Ref. [1]). In order to choose a specific acceleration mechanism suggested for solar flares (see the Table) we need to track electrons of ~10 MeV and protons of ~100 MeV. From the table it is clear that any acceleration mechanism may operate during the first phase, but we have only two possibilities for the second phase.

To get information on 10 MeV electrons is possible via modeling the results of radio, X-ray and γ-ray observations, but this problem has not been solved unambiguously yet. It is impossible in principle to get information on protons with energies between 30 and 300 MeV (between protons generating nuclear γ-ray lines and π0-mesons). Therefore let's consider both solar and interplanetary observations, as described in Ref. [2]. As a proxy of solar > 100 MeV proton flux we use the count rate of the anticoincidence shield of the spectrometer on the INTEGRAL spacecraft. Information on relativistic solar electrons is available from the Earth via SOHO.

In studying a solar event, we must be clear about timing. Since the acceleration phases differ by either the presence or the absence of relativistic electrons, we assume a time "zero" at the onset time of the 15.4 GHz radio emission, generated by relativistic electrons via the gyrosynchrotron mechanism. The chosen time zero can be considered as the time at which relativistic electrons first appear in the solar atmosphere, and the boundary between the first and the second phases.

This flare is a brilliant example of two-phase acceleration. It had distinct first and second phases separated by about ten minutes. The M5.5 flare in the SXR radiation (GOES) began at 20:28 UT (- 15 min with respect to our zero time). However, RHESSI recorded the beginning of a gradual signal increase in its 25-50 keV channel substantially earlier, approximately from 20:17 UT (-26 min). The RHESSI data also revealed two separate episodes of HXR radiation ("spikes") as clearly seen in Figure 1. The first spike started at time -13 min. It was characterized by a relatively soft spectrum (HXR below 100 keV, radio waves at frequencies <8.8 GHz) and coincided with the maximum of the SXR flare according to the GOES data. The small delay time of the emission-measure maximum relative to the maximum of the temperature characterizes the impulsive character of the flare at this time. The preflare and impulsive stages of this event lasted more than 20 min and were accompanied by the acceleration of electrons with energies of less than 100 keV. The second spike was observed during the decay phase decay of the SXR radiation. It started simultaneously with the emission of radio waves at 15.4 GHz and was characterized by a harder spectrum (up to 100 keV), along with a gradual temporal profile. Note that both HXR spikes correspond to the post-eruption phase, because they were detected after the inferred time of the CME position at a distance of one solar radius, as judged from the LASCO data shown in Figure 1. 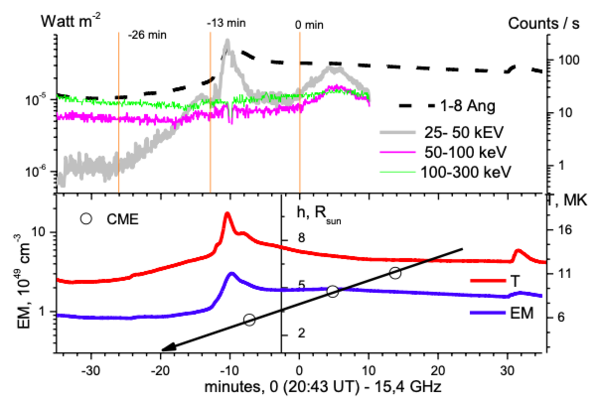 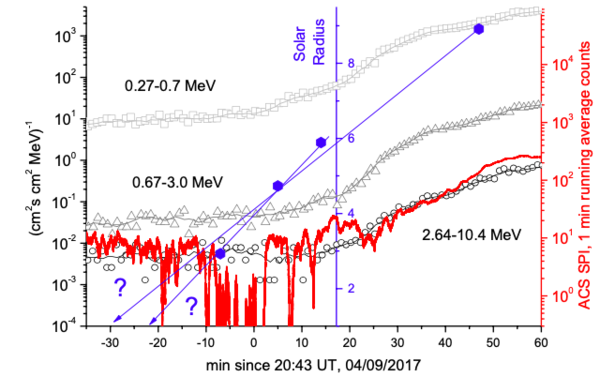 The delay time relative to electromagnetic radiation for protons with energies of 100 and 500 MeV (v/c 0.43 and 0.76) is ~14 and 5 min, respectively. The arrival time of the first protons varied between +15 (possibly) and +25 min (Fig.2, ACS SPI). Hence, the 100-MeV protons appeared in interplanetary space between 0 and 10 min, while the 500-MeV protons appeared between 10 and 20 min (Fig. 2), which coincides with the second HXR spike at the decay stage of the M5.5 flare. Therefore, we identify the first HXR spike with the first phase of the flare acceleration, while identifying the second spike with the second phase of the flare acceleration. Apparently, electrons exhibiting a softer spectrum that were accelerated in the first HXR spike did not reach the threshold energies for their detection by SOHO and/or their intensity was below the background (Fig. 2).

There is no role for CME/SEPs in this scenario of particle acceleration in long duration flares, as explained in Figure 3. 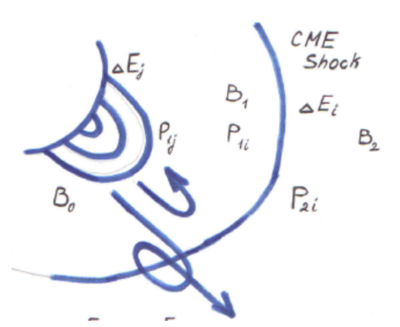 Figure 3: In this sketch the index j refers to the flare region, and i to the CME region. The outward motion of the CME successively extends its influence over a wider and wider domain of closed magnetic fields. In principle the CME can play the role of a mirror, returning accelerated particles into the flare region and enabling further acceleration. The CME additionally accelerates particles that cross its front many times, creating the conditions for the particles to escape in a wide spatial angle. Protons trapped behind a CME may return back to the dense solar atmosphere and thus produce the sustained γ-ray -emission.

[1] "RHESSI Observations of the Proportional Acceleration of Relativistic >0.3 MeV Electrons and >30 MeV Protons in Solar Flares"

[3] "Radio Spikes and the Fragmentation of Flare Energy Release"

Irina Grigorieva, Yuri Logachov and Andrei Sadovskii are co-authors of this Nugget.