Although we have been observing white-light solar flares (WLF) since 1859, it is still not clear what their emission mechanism is. The hallmark of the WLF is the presence of a detectable continuum excess, in addition to easier-to-detect signatures such as H-alpha radiation from the chromosphere. Potential scenarios include optically thin hydrogen free-free and free-bound emission from the chromosphere (the so-called type I WLF), and optically thick blackbody radiation from deeper layers (type II WLF), as described in Ref. [1]. High-resolution spectroscopic observations in the NUV/visible thus become very important in order to distinguish between the two scenarios. There is currently a lack of such high-resolution spectra of WLFs, with many of the available spectra having been obtained more than 30 years ago with relatively primitive instrumentation. By way of contrast many such spectra of stellar flares exist, mainly from M-dwarf stars due to the very high contrast and flare frequency offered by these objects.

Spectral observations of solar flares are difficult to obtain due to the difficulty in predicting when and where the white-light emission will appear, and because the solar photosphere is relatively bright. Solar continuum thus has less contrast than a comparable flare would have on a cool M-class star. To maximise the probability of capturing a WLF with a slit spectrograph we have constructed the simple instrument illustrated in Figure 1. This places a circular diaphragm restricting the spectroscopy to only a small part of the solar disc (typically an active region), over which the light is integrated (Ref. [2]). The setup allows us to obtain a spectrum of that region (350 nm - 440 nm) with a spectral resolution of 0.03 nm/pixel but without any spatial information within the region. A co-temporal context image and a reflection from the diaphragm are also obtained, which aids in coalignment and contextual information.

Figure 1: A schematic diagram of the optical setup. The image selector is placed in the focal plane of a horizontal solar coelostat at Ondrejov Observatory, Czech Republic. The context camera shows an image of the solar chromosphere in H-alpha together with the position of the selected diaphragm. The light is focused onto an optical fibre feeding a spectrometer.

Essentially our new spectroscopic observations allow for much higher contrast by reducing the area of the photosphere competing with the flare emission. The observer can restrict his attention to a single active region based on its likelihood for flare occurrence.

We have described our novel spectroscopic observations of two flares in Ref. [3]. Figure 2 shows NOAA 12087 near the limb on 2014 June 11. This active region produced two X-class flares shortly after its appearance on the east limb on 2014 June 10. The six snapshots obtained between 8:07 and 9:09 UT show the M3.0 (first row) and X1.0 (forth - sixth rows) flares with significantly different spectral response. The second flare had a clear white-light counterpart also observed by the HMI instrument on board SDO. 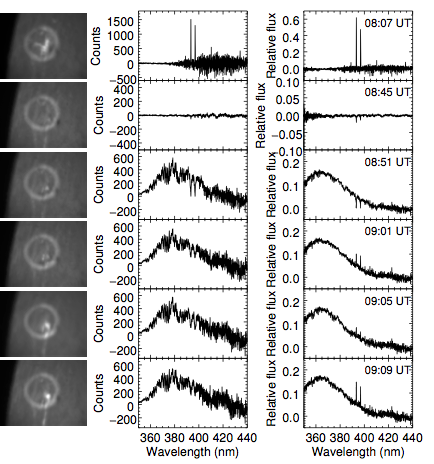 Figure 2: Observations of M3.0 and X1.0 solar flares (SOL2014-06-11T08:09 and SOL2014-06-11T09:06, respectively). The context images in the left column show the solar chromosphere in H alpha with a bright circle (reflection from the delimiting diaphragm) overlaid. Only light inside the circle enters the spectrometer. The middle column shows the flare excess, while the right column shows the excess normalized to quiet Sun.

The spectrum of the X1.0 flare shows an absence of emission in the higher-order Balmer lines, which are commonly observed in these events. The lack of hydrogen emission was also observed by the SDO/EVE MEGS-B spectrometer in the EUV waverange 35 - 105 nm, which covers the higher-order Lyman lines. Direct observations of the Ly-alpha line by GOES/EUVS ([https://www.ngdc.noaa.gov/stp/satellite/goes/doc/GOES_NOP_EUV_readme.pdf .PDF file) also did not detect this flare. 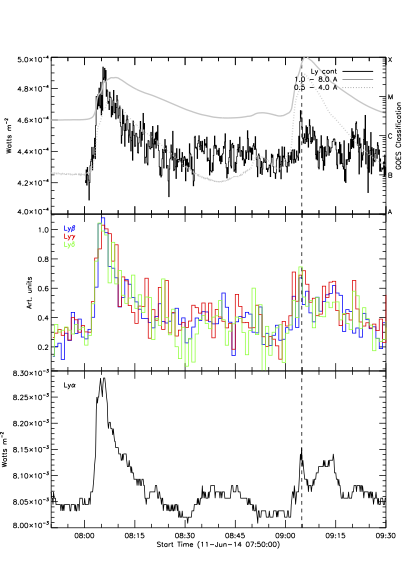 In an effort to interpret the lack of hydrogen emission we performed two models using the RADYN code (Ref. [4]]. The `conventional’ approach to such modeling employs electron beams with parameters estimated from RHESSI observations (F=3.1011 erg/cm2/s, Ec=20 keV, δ=3). The type II WLF are expected to originate in the deeper layers, so in the second model we deposited the same energy flux directly into the temperature minimum region (heights < 600 km). The resulting spectra in Figure 4 are qualitatively different. While the beam heating produces clear and strong emission in Balmer lines, a deposition of the same energy into deeper layers causes a massive increase in the continuum, while the lines have absorption cores with elevated wing emission.

RADYN simulations provide some very important insights into the origin of the X1.0 WLF emission. In order to generate the strong continuum without substantial Balmer emission the energy must be dissipated deep into the atmosphere (< 500 km). Our context imaging shows that only a small fraction of the measured area was affected by the flare (4 - 7 %). A more detailed comparison of the spectra would require a composite spectrum that will include both flaring and quiet signal corrected for the corresponding areas. Additional simulation work suggests that if we deposit the energy sufficiently deep in the atmosphere the emission wings will disappear and we get clear absorption profiles.