A solar flare is most spectacularly visible in the faintest part of the solar atmosphere, the corona, but we have long known that the most energetic parts of a flare are its lowest layers - we call these regions "ribbons" or "footpoints". Many RHESSI Science Nuggets (e.g., [1]) have dealt with various aspects of these fascinating places. From the RHESSI perspective of high-energy astrophyics, the deepest parts of the solar atmosphere are necessarily dominant: a fast ion or electron propagates to the end of its range, which can be measured in a column density of order 1 gram/cm2. For example, Thomson scattering, the basic process of hard X-ray interaction with matter, has about this range. 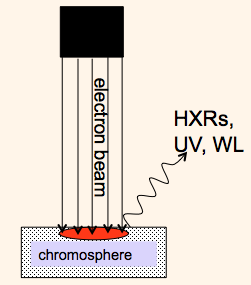 Figure 1: Illustration of the "thick target model", as drawn by Lyndsay Fletcher. This schematically shows the relationship between a coronal particle source and its radiation sinks in the lower solar atmosphere (ribbons and footpoints).

The remarkable coincidence here is that the solar atmosphere, from the photosphere out to infinity, has a column thickness of only a few gram/cm2. By contrast our protective Earth's atmosphere approaches a thousand times that thickness.

What is the actual height of a flare?

The discussion above clearly places the important part of a flare - at least, its energetically significant radiation - in the thin layer at the bottom of the solar atmosphere. But how high above the photosphere is this layer? For the most part, stellar astronomers do not try to answer this question precisely in terms of an actual physical height (e.g., measured in cm from Sun center), but instead in terms of optical depth in visible radiation. This is convenient observationally, but leaves the relationship between optical depth and physical height essentially uncalibrated. Images at disk center only show their two dimensions and provide no clues, in an optically thin medium. In principle any telescope has the power to tell you where something is, and so the third dimension might come from a limb view. For an optically thick radiation, this expresses itself in terms of the limb darkening function, but for an optically thin object in principle one could just look at see where it is on the sky, and for a source known to be at the limb, that would be the height. The problem is that the chromosphere is quite thin, at least based on 2D radiative-transfer models, and so very high angular resolution is necessary. Also, how do you really know what object is just at the limb?

The Sun is close enough, as an astronomical object, for us to get perspective views by just putting our telescopes sufficiently far out into space. The two STEREO spacecraft do this, approximately in Earth's orbit, and have been giving us 3D perspective views of solar objects such as CMEs since launch in 2006. This Nugget shows how these data can also be used to locate flare effects in the lower solar atmosphere, in the third dimension. 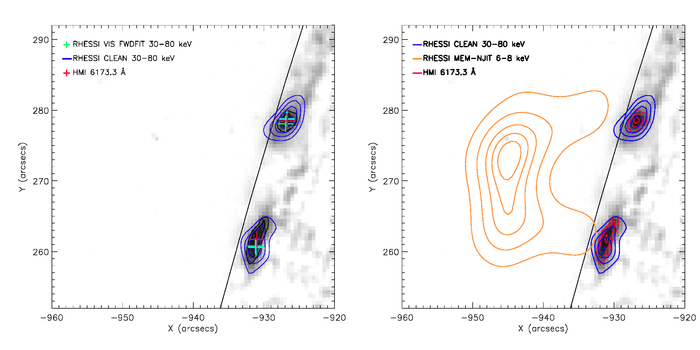 Figure 2: White light (HMI) and hard X-ray (RHESSI) views of SOL2010-02-24. The background shows a difference with a reversed color table, so the white-light flare shows up as dark. The image on the right shows soft X-ray loops connecting the footpoints.

Figure 2 shows a comparison between white light and hard X-ray sources for a white-light flare at the limb, SOL2010-02-24T07:35 (M3.5). The white-light data come from the HMI instrument on SDO. Because of projection, the EW coordinate basicaly measures source height, so this comparison shows that these two radiations come from the same height, within errors. But how high is that really? To answer this question we must know the image scale very precisely; that information comes from a comparison with the adjacent limb. The problem is that the limb is not at a height corresponding to the radius of the Sun directly (see Reference [1] for a discussion of this point). Instead it lies some 500 km above the true photosphere, ie that viewed at disk center. Thus the flare sources appear artificially near to the limb in Figure 2.

A final problem in learning about the third dimension (the flare height) can be solved directly by STEREO. We can learn exactly where the flare was, in this case, because it was near disk center as viewed from STEREO-Behind (which trails behind the Earth, and thus sees above the E limb right now. Figure 3 illustrates the mapping of the flare position, as seen by STEREO, on to the view from HMI.

Figure 3: Welcome to 3D astrometry! The image at the left shows the flare observed by STEREO-B, unfortunately with detail lost because of saturation. Here the solid line is the location of the HMI/RHESSI limb. On the right, the projection of saturated positions on the HMI image. The solid line is the projected location of the actual photosphere, at the line of positions determined by the centroids of the saturation streaks, whereas the dashed lines are +-10 EUVI pixels as a rough guide to uncertainty. Because of the extreme projection, the STEREO location does not need to be determined very precisely.

In the right-hand panel of Figure 3, the true height of the WL/HXR sources is the very small difference between the solid line and the centroids of the sources - in this case, 0.7+-1.2 Mm, where the error is dominated by the EUVI image saturation.

The RHESSI centroid determination has a precision well below one arc sec, in good conditions, and this makes it interesting as a way of measuring source height for a projected event as described here. Uniquely in this case, thus far, we have used the STEREO data to get a confirmation of the flare location (front side, near the RHESSI/HMI limb). We expect that STEREO location determination, for otherwise invisible flares, will be helpful for other kinds of 3D astrometry in the future.

Retrieved from "http://sprg.ssl.berkeley.edu/~tohban/wiki/index.php/A_Flare_in_3D"
Category: Nugget
Facts about A Flare in 3DRDF feed