There was a time just prior to the space age when radio observations were the hot new technology. Like most new astronomical techniques, the Sun was a popular target, and solar physics enjoyed great advances through the exploration of this first non-optical spectral window. This continued well into the 1960’s as radio astronomy matured, but then came the age of general purpose instruments such as the Westerbork Radio Synthesis Telescope and the Very Large Array, built primarily for non-solar use, with limited time available for solar observations. To be sure, these and other instruments have made many key discoveries, and a succession of solar-dedicated radio heliographs (Culgoora, Clark Lake, Nançay, Nobeyama) further advanced the science, but unlike other wavelength regimes a key ingredient has been lacking—high quality spectral imaging over a broad band of frequencies. The original Owens Valley Solar Array (OVSA) aimed to fill that gap, but suffered from too few antennas and low sensitivity for astronomical calibration. That will soon change with the coming Expanded Owens Valley Solar Array (EOVSA), which will be the first solar-dedicated radio instrument capable of realizing this long-sought goal.

For more than a decade, the FASR (Frequency Agile Solar Radiotelescope) Consortium [1] has worked on a series of design studies and prototypes that put us in a position to capitalize on the 2009 NSF ARRA (American Recovery and Reinvestment Act) funding opportunity. Our proposal was successful, and resulted in a major expansion of OVSA (EOVSA [2]). EOVSA is approximately 10% of the size and cost of FASR, and is in fact a completely redesigned instrument employing FASR technology. The EOVSA array is taking shape now [3] (Figure 1) for completion in late 2013.

Figure 1: Photo from Jan. 2012 showing the first new 2.1-m antenna erected on pad #1, with pads 2, 3, 4 and 8 visible nearby. Standing next to the antenna are, from left to right, Nimish Sane (Digital Engineer), Dale Gary (NJIT Professor and Director), and Gelu Nita (NJIT Research Professor).

Whereas OVSA used 7 antennas to image typically 40 frequencies from 1-18 GHz in 8 seconds, with switched polarization, EOVSA will have 13 antennas using advanced RF and digital technology to provide roughly 500 science-band frequencies over 1-18 GHz in simultaneous dual polarization in 1 second (the 1-3 GHz band will be sampled more often, for a time resolution of 0.2 s). These 500 science bands are accumulated from 116,000 separately measured frequencies, which are examined on the fly to remove radio-frequency interference prior to accumulation. In addition, whereas OVSA used a non-uniform array with two 27-m and five 1.8-m antennas for solar observations, EOVSA will use the 27-m antennas (now equipped with sensitive cryogenically cooled receivers) solely for calibration, so that solar observations are performed exclusively with a uniform array of thirteen 2.1-m antennas.

Figures 2 and 3 show examples of image quality for snapshot imaging of flares and synthesis imaging of the full Sun, based on accurate modeling of the instrument response. 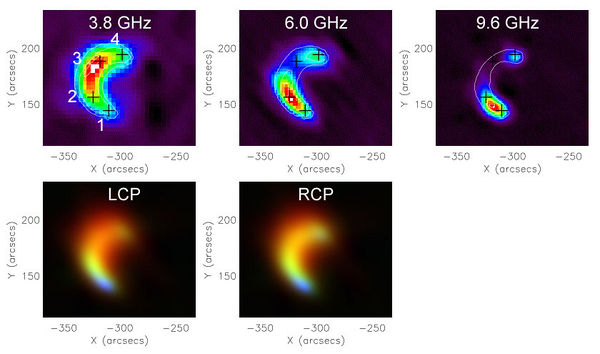 Figure 2: Upper row: simulated EOVSA images of a flaring loop in total intensity at three representative frequencies. Note how the source transitions from a loop-top source at low frequencies to a foot-point-dominated source at high frequencies, due primarily to the magnetic field strength variation in the loop. Lower row: multi-frequency false color images in left-circular polarization (LCP, left) and right-circular polarization (RCP, right), where the rainbow colors from red to blue represent low to high frequencies. 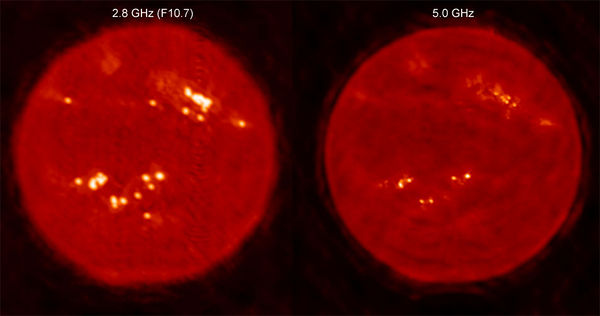 Figure 3: Simulated EOVSA full-day synthesis maps at two representative frequencies, 2.8 GHz (the frequency of the F10.7 index), and 5 GHz. Note that a few of the bright, compact, sunspot related sources at 2.8 GHz are not seen at 5 GHz, because their magnetic field strength in the model is lower than for the others. Such full-disk images will be made daily at hundreds of frequencies, and will be used to produce the first daily coronal magnetic field maps.

The main radio emission mechanism from flares in the 1-18 GHz frequency range is gyrosynchrotron (GS) emission from electrons of 10s to 100s of keV energy—the same electrons that produce the hard X-ray emission seen by RHESSI. From multifrequency images such as in Figure 2, GS flux and polarization spectra as shown in Figure 4 can be obtained along each line of sight, from which to derive parameters of the source as a function of position in the loop, including magnetic field strength and the electron energy distribution. Movies of such spectra in time provide precise information about electron acceleration, transport, trapping, and loss mechanisms. Through automated pipeline processing (software being written by team members Gordon Hurford, Jim McTiernan, and Stephen White), quick-look images and spectra will be produced daily for every radio burst, just as RHESSI has done for hard X-ray bursts, and user-friendly software will be available to create more detailed maps and spectra on demand.

Figure 4: Spatially resolved flux (sfu/pixel) and polarization spectra along the four lines of sight marked in the upper panels of the simulated flaring loop in Figure 2. The flux spectra in the left-hand panels show both RCP (red) and LCP (green), with open symbols from the model, and points with error bars from the corresponding simulated EOVSA images. Note the shift in peak frequency in different parts of the loop, due to the varying magnetic field strength. The polarization spectra show the degree of polarization changes from negative (LCP) at the footpoint with negative magnetic polarity to positive (RCP) at the looptop and positive polarity footpoint.

Likewise, full-disk, multi-frequency, synthesis images like those in Figure 3 will be produced daily, from which coronal magnetic field strength and direction, temperature, density, and existence of non-thermal particles will be measured in active regions and other regions of the non-flaring Sun. This includes daily F10.7 images, providing for the first time spatially resolved maps of this important, long-running index of solar activity.

The Expanded Owens Valley Solar Array promises to revolutionize radio studies of the Sun, and bring daily, quantitative measurements of key solar parameters to the solar community by October 2013. Users of RHESSI data will find the availability and use of EOVSA data to be very familiar, since the analysis software will adopt much of the tried-and-true RHESSI approach to imaging and spectral analysis. Additional tools, such as the GX_Simulator ([[4]]) are being developed to aid in modeling and interpreting joint radio and hard X-ray data. There remains a lot of work to do in the next 18 months, but the project is well on track for completion of a science-capable three-antenna prototype to begin in October 2012, followed by the build-out to the final instrument over the next year.

Remember, though, that EOVSA is only 10% of FASR, and will do only a subset of the science of that instrument. Due to its limited (compared to FASR) frequency range, image quality, and spatial resolution, EOVSA will not be able to address the quiet Sun science, the meter-wave science, nor the direct CME imaging that FASR can do. Therefore, it remains vitally important for FASR, which has received high-priority rankings in three National Academy decadal surveys, to be pursued at the earliest opportunity. We anticipate that EOVSA will be a strong driver of the science case for FASR, and will be a vehicle to greatly expand the user base for solar radio data.