A Sunspot from Cycle 25 for sure

This brief Nugget simply announces that YES, we really have seen Cycle 25 sunspot activity. An earlier Nugget hinted at this, but it was not so clear a case as presented by today's new tiny sunspot. Why is this interesting? It's because spots appearing this early in a cycle - even before a minimum is well established - are quite rare. We could speculate that solar minimum may arrive early and/or may be brief, more evidence regarding the seemingly stochastic component of the development of the solar magnetic cycle.

At the time of writing, NOAA has not identified this new sunspot with an official active-region number, and so there could be some things to quibble about. But the magnetic polarity of the region unmistakeably identifies it as a piece of the new cycle, because it reverses the polarity expected for Cycle 24 regions.

Figure 1 here shows the new spot as of this date (10-April-2018). It is marginally detectable but definitely there in relatively crude 1024x1025 .gif versions of the beautiful data from the SDO space observatory. 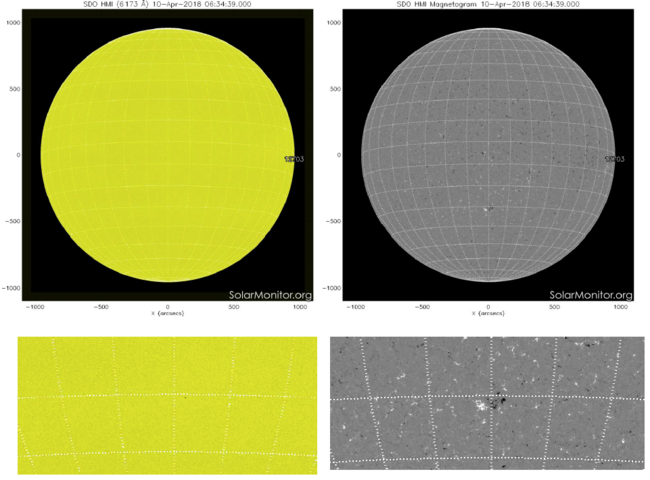 Figure 1: File images from the HMI instrument on SDO: left, the continuum intensity; right, the telltale magnetic field. From the latter one can see black polarity to the right ("preceding", as the Sun rotates). This is the opposite of that shown, for example, by the exceedingly tiny region at about -5 degrees.

It requires a bit of patience to see the spot; refer to the location of the magnetic features and perhaps dither the window on your browser screen. The icon for this Nugget on the parent page here has a slightly better view derived from a 4096x4096 image.

Sam Freeland notes that this little region arguably has produced the first flare of Cycle 25. We might label this SOL2018-04-09T12:57 (A2.5). We thank Bill Marquette and Dick Canfield for relaying this information. Could such a tiny event have been detected by GOES at the corresponding phase of the previous cycle?

This sunspot has been tabulated in the excellent SOLEN page of Jan Alvestad. The Nugget-writers here thank him for his thorough monitoring of solar activity, and also thank Leif Svalgaard for paying close attention as well.

Retrieved from "http://sprg.ssl.berkeley.edu/~tohban/wiki/index.php/A_Sunspot_from_Cycle_25_for_sure"
Category: Nugget
Facts about A Sunspot from Cycle 25 for sureRDF feed