Somewhat surprisingly, even this ostensibly weak Cycle 24 has produced 29 X-class flares thus far. Of these the third most powerful, GOES X4.9, just happened a week ago (25 February 2014). Reflecting the weakness of the solar cycle, the active region responsible (NOAA Region11990) had a relatively small sunspot area, only 250 millionths of the solar hemisphere - the biggest groups can be an order of magnitude larger.. But the flare itself was magnificent, and this Nugget just points to early views from RHESSI and other observatories.

A RHESSI-centric overview of SOL2014-02-25 can be seen in its specifically tailored Browser page; note that the quick-look images have incorrect roll information, not an important problem but reminiscent of the antipodal flare theory proposed in a Nugget last April 1. Figure 1 shows the spectrogram representation of the RHESSI Data, showing many impulsive peaks and hinting at a soft-hard-harder component. 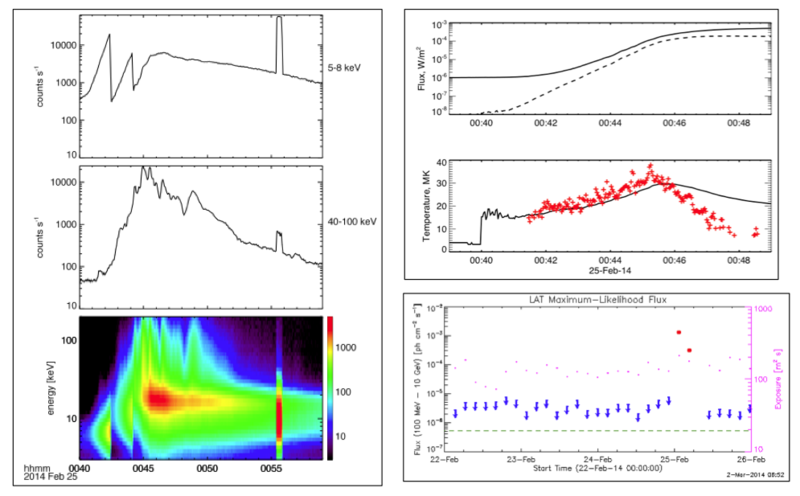 The high-energy views in Figure 1 show several things. First, the standard spectrogram representation for RHESSI, showing many hard spikes and other systematic behavior. This can be localized to the image position thanks to RHESSI's capabiity for imaging spectroscopy. Second (upper right) the GOES soft X-rays during the rapid impulsive increase; the red temperature points show the incremental approach introduced in a previous Nugget. This entire development took only ten minutes. Finally, the lower right showing the remarkable >100 MeV counts from the Fermi LAT instrument; here the high-energy radiations persisted for at least two three-hour increments. It is not at all clear how such a long-enduring high-energy source relates to the highly dynamic flare development; maybe this flare will provide the clues that allow us to identify - via the extensive imaging - the structures supporting this emission.

Glimpses of the flare in EUV and coronal images are in Figure 2, with links to their movie versions. A flare of this magnitude almost always produces powerful coronal effects, and this was no exception; in spite of its E limb location, its high-energy particles readily made it to Earth.

Fig. 2: Views of the event in the EUV (left; see the movie for the full development); and in the distant corona (right; see its movie to appreciate the colossal scale of the eruption. Note that 100-MeV gamma rays were still coming from the Sun (the white circle) as this ejection sped past the coronagraph's field of view.

We know that the most powerful part of a solar flare appears in the lower atmosphere, where the "white-light flare" phenomenon had been discovered in 1859 by Carrington and Hodgson independently. This flare produced intense white-light emission, concentrated into two major bright regions as was the case for the 1859 flare. Figure 3 compares these brightenings with hard X-ray and soft gamma-ray observations from RHESSI. 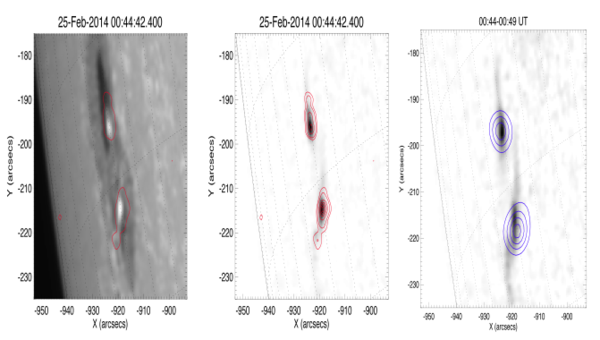 Fig. 3: Left, the white-light flare emission seen without differencing, each patch in a sunspot penumbra; middle, the overlay with RHESSI hard X-rays at >30 keV; right, the overlay at >250 keV. Both of these comparisons confirm the intimate association of the powerful white-light flaring, and particle acceleration up into the gamma-ray domain. Note that the background optical image for the overlays is a difference image, and with a reversed color table for clarity.

The exact coincidence of high-energy emissions and white-light continuum further contributes to the realization that both of these flare radiations originate deep in the atmosphere - in fact, within the photosphere. This has only been recognized recently, thanks to the high resolution of RHESSI [Refs. 1, 2]. In this case no careful analysis has been done, and that is important at precisions below 1 arc sec.

This very nice flare was also very well observed, not only by RHESSI but by a swarm of highly competent observatories in space and on the ground. In a Nugget like this one can only hint at the complexity of the phenomena observed, and we strongly recommend a study of the AIA movies in particular, to appreciate this complexity. But in this event - a sharp onset in soft X-rays, and no hint of a precursor - we think that the key observations are in the X-ray and gamma-ray domains.

We thank Mitsuo Oka and others in the RHESSI group for discussions and help.