In this Nugget we describe an extreme solar flare, in the sense that its physical properties deviate strikingly from the normal behavior: it appeared mainly as a hard X-ray and radio source, without the usual GOES-type soft X-ray source. The event was well-observed by RHESSI and radio observatories, specifically the Owens Valley Solar Array (OVSA) and Phoenix-2. The flare could have the IAU designator SOL2002-07-30T17:37:30; normally the time field would be the GOES peak time, but in this case there was only a tiny GOES X-ray peak (Ref. [0]). It is quite rare not to see soft X-ray counterparts for strong solar hard X-ray bursts such as this one.

In general hard X-rays and radio waves tell us more about non-thermal physics (particle acceleration, non-MHD effects, etc). The usual paradigm for solar flares includes energy release in the corona (as has happened in this case), followed by the so-called evaporation of chromospheric material back up into the corona. It is this evaporated plasma that produces the characteristic soft X-ray emission of a solar flare. Other categories of unusual event include the ``impulse response flare type (Ref. [1]) and the Masuda type (Ref. [2]); we prize extreme cases because they may guide us better to different forms of non-solar magnetic activity. Now we really have another clear example of a different paradigm, but earlier events have given hints about the nature of the phenomena.

The oddness of this event is immediately apparent in Figure 1. There is a nice RHESSI hard X-ray burst, of about one minute's duration, and no counterpart at all (above the GOES C level) in soft X-rays. At the time of the hard X-ray burst, a strong type III radio burst also appeared. 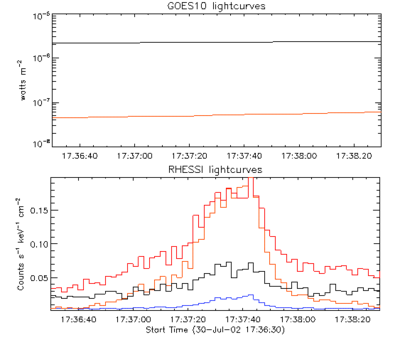 Figure 1: Upper, GOES soft X-rays, and lower, RHESSI hard X-rays. Note that there is no soft X-ray counterpart of the burst.

The location and morphology of the event are also interesting. Figure 2 shows that it occurred at the "following" (in the sense of solar rotation) boundary of its active region. In this figure the green arc in the right panel shows a model magnetic structure. The footpoint structures extend to remarkably low energies (the three bands shown in the left panel are 9-15 (red), 15-30, and 30-100 keV (blue). It is the classical morphology of a coronal flux bundle, with a length inferred to be some 4 x 109 cm and volume 6 x 1026 cm3. These geometrical constraints, plus the diagnostic information obtained from the X-ray, radio, and magnetic observations allow a great deal to be learned about this unusual flare.

Figure 2: Left, the RHESSI hard X-ray contours superposed on an [1] image at 195A. Even at low energies (the red contours are 9-15 keV) one sees only footpoints, and not the loop strucvture implied by the magnetic field (green arc in the right panel). The right panel shows OVSA radio images in two bands covering 2.6-8.2 GHz, superposed on an [MDI] magnetogram. The ovals in the upper right of this frame show the point response functions.

The information in Figure 3 includes some microwave spectra, and some inferences about the number of electrons involved in producing the observed radiation. The lower panels show that a huge flux of electrons above 6 keV is necessary, and that the density of these electrons approaches 109 cm-3. This density easily matches that inferred from the thermal plasma distribution in the loop, which in any case would only be an upper limit given its invisibility. This object looks like a predominantly non-thermal plasma. 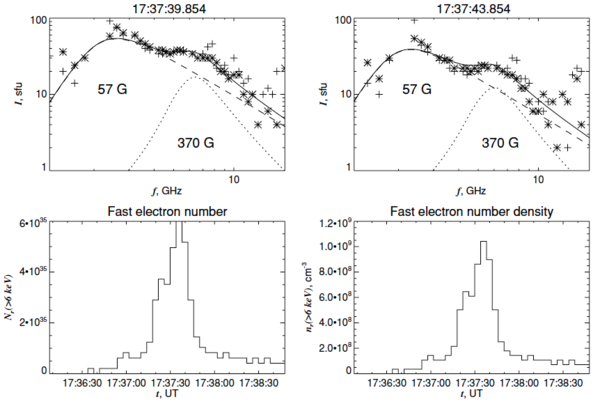 While the energetic electrons bombard the chromosphere at a rate comparable to that of an average GOES M-class flare as seen from RHESSI, the flare shows little evidence for significant thermal plasma heating or chromospheric evaporation. A highly asymmetric flaring loop, combined with rather low thermal electron density, have made it possible to detect the GS radio emission directly from the acceleration site. We appear to have found a clear case of non-thermal domination: the electron distribution function in the coronal plasma consists mainly of fast particles, with no evidence for a comparably important thermal core. The physics of such an object is ill-understood at the present time.