Iron in the solar corona

It seems sometimes as though the solar corona might be made entirely of iron, since its ions yield so many EUV and X-ray emission lines - a remark possibly first made by Werner Neupert. In reality, of course, the corona mostly consists of hydrogen, which therefore dominates the dynamics, and the iron is perhaps just there to be helpful diagnostically. In any case the high Z of iron gives us an opportunity to observe many states of ionization; in the corona (if we include the prominences) we could probably identify all 26 of the ions at one point or another. In particular we can watch the thermodynamic state of the corona evolve with space or time, ie see where and when it is hot or cold. Flares offer wonderful opportunities for temperature changes because of the heating resulting from the energy that they extract from the magnetic field.

Solar flares inject large quantities of chromospheric matter into the corona, and simultaneously the process heats this material to temperatures initially higher than those of the corona itself. The result is the well-known flare arcade, readily recognized in any EUV or X-ray emission. Many of these Nuggets show examples of such arcades. Before the modern era, though, the phenomenon was already recognized via the Hα line. This presumably shows material at about 104 K. Figure 1 shows a classic view of an Hα "loop prominence system" from the Białkow observatory. Such loops appear as though magically following a flare, and disappear via flows called "coronal rain" as the material returns to the physical state of the chromosphere. All of this is well understood as the aftermath of the injection of hot matter. Initially the plasma is too hot to be seen in Hα, and indeed this emission appears only at the very end of the cooling. The initial temperatures may be high enough to ionize some Fe completely, depending on the flare. 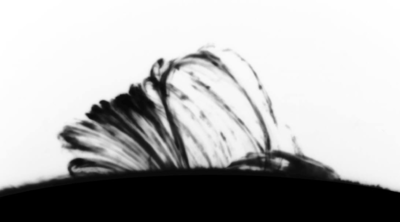 Figure 1: An example of an Hα loop prominence system seen at the limb of the Sun. Note the array of tilts of these loops; in spite of their distinct geometries, they have cooled to chromospheric temperature almost simultaneously.

Before the loop prominence system cools to Hα temperature, it is visible to NASA's EVE spectrometer in many different ionization states of iron. EVE observes the Sun as a star, and so accepts radiation from an entire arcade (such as that shown in Figure 1), smearing out sources with different temperatures if they are simultaneously present. The plots in Figure 2 and 3 give an "Fe cascade" representation of the time history of a flare (SOL2011-02-15 in this case). This particular flare was also responsible for the first sunquake observed in the current solar cycle. This diplay shows a dozen ionization states ranging from Fe +8 to Fe +23 (the lithium-like state) with a few gaps. Each sub-plot shows the peak line flux vs. time as an excess over the preflare background, and in each panel the vertical blue lines show the time range of the hard X-ray RHESSI event, and the dashed red line shows the zero level. Figure 2, covering a time range of 20 minutes, shows the expected cooling fairly clearly: the less-ionized states peak later than the more-ionized states. 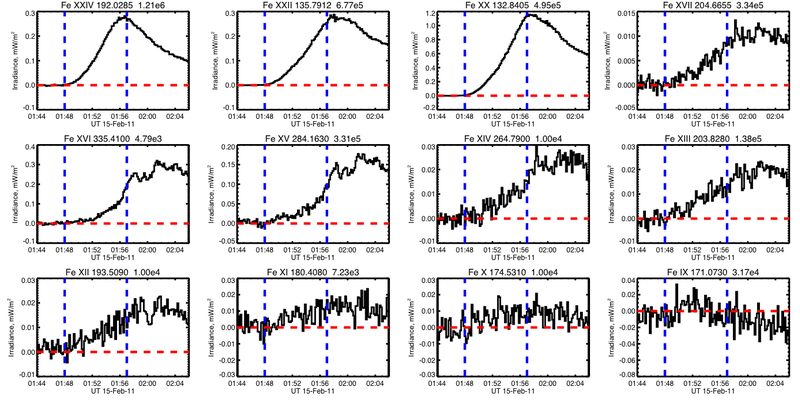 Figure 3 shows the Fe cascade over a longer time range (five hours). Here something different appears: The lowest-excitation Fe states decrease below their preflare levels. This is identifiable with the formation of a coronal mass ejection CME, as also seen in soft X-rays as a "dimming". Essentially the event blows away a part of the ambient corona, which is seen in these low-excitation lines before the flare. 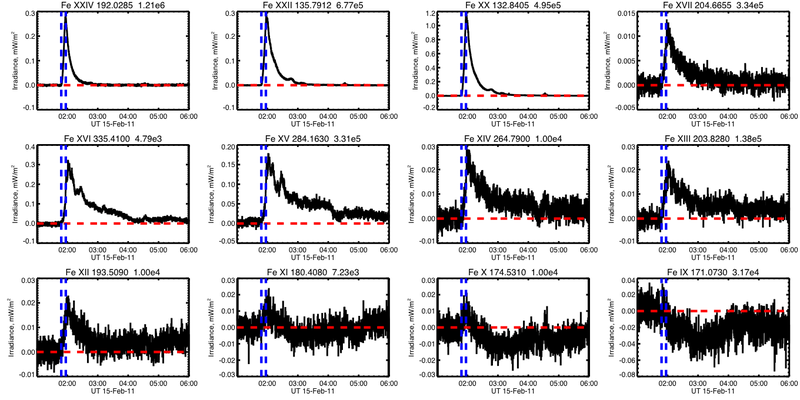 The Fe cascade plots nicely characterize the expected time evolution of a post-flare loop system. The EVE data have enough signal-to-noise ratio for an X-class flare, such as this one, to learn much more about the time evolution of these systems, and so detailed analyses will be interesting. One virtue of the spectra is that they produce such a wealth of spectra for a single element, thus avoiding confusion due to possible abundance variations. These may also be able to "weigh" or find the mass of a coronal mass ejection, in a substantially different manner from the way a coronagraph does it.

What we do not see anywhere in the Fe cascade is any association with the hard X-rays (the blue lines showing the RHESSI timing in Figures 2 and 3). EVE spectra do contain features that do, and we will discuss these in a future Nugget.