Most of the RHESSI Science Nuggets deal with solar flares. This is a rich subject, but one made much richer by the wealth of similar processes elsewhere in the Universe. The sites of flare-like phenomena range from the humble aurora borealis, probably glowing now only a few Mm from your screen, out to really extreme things such as the magnetars. In between these limits, if they are the limits, we find true flares on more ordinary stars. These cannot be imaged, except as point sources, but they can be followed spectroscopically and photometrically, often in greater detail than our routine solar observations permit. This is amazing when one considers the great distances of these objects. The inverse-square law means that the signal is reduced by the square of the ratio of one parsec (the nearest flare star) to an astronomical unit (the nearest Sun). This is a factor of about 4 x 1010, a huge number.

A stellar flare can occur on a strictly solar-type star, ie one of the same age, rotation rate, spectral type and mass. Flares take place on solar analogs but also on different types of stars. Solar-type stars are solitary stars with surface temperatures of a few thousand K, slow rotation, and a convective envelope. The wonderful thing is that there are so many other types of stars out there, each with differences among these properties, and so each star is like a different laboratory experiment with slightly different settings of the variables.

In this Nugget we just ask a first question: How do the bolometric luminosities of stellar flares compare with solar ones?

An amazing flare on a very faint star

The flare shown in Figure 1 occurred on the faint star LP412-31, an M8 dwarf at a distance of about 15 pc and a luminosity of about 2 x 1030 ergs/s. The flare decreased the V magnitude of the whole star by 6, corresponding to a brightness increase of about a factor of 250. The flare was fully observed both in soft X-rays and in the V band by instruments on the XMM-Newton satellite. The flare power in the V photometric band peaked at about the quiescent luminosity of the star. Thus the total bolometric luminosity of the star more than doubled during the flare, which is remarkable considering that the optical flare site could be constrained to a small fraction of the stellar surface (by evaluation of the temperature increase during the flare). 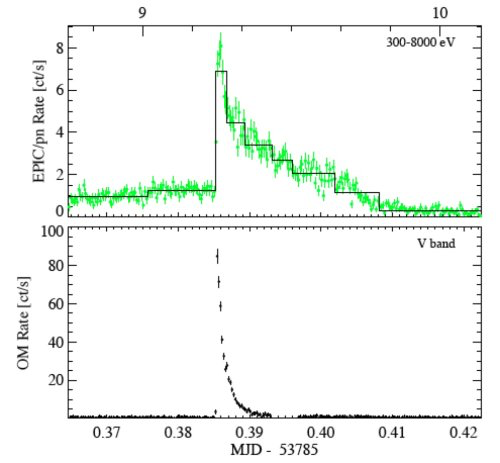 Figure 1: A stellar superflare from a faint M dwarf star. The upper panel shows soft X-ray emission, and the lower panel the brightness in the V filter, close to the wavelengths of ordinary visible light. The visible emission precedes the soft X-rays and is very impulsive.

An amazing flare on a normally bright star (the Sun)

The plots in Figure 2 show comparablequantities for a solar flare of comparable total energy. Note the greatly suppressed zero of the upper panel - the peak flare increase was only 0.027%, rather than a factor of 250! This is entirely because the quiescent Sun is so much more luminous than an M dwarf star.

To a solar astronomer's eye, the stellar flare looks very familiar. It has a fast rise and slow decay; the optical emission (likely to be excited directly by the nonthermal energy release, as in a solar white-light flare, precedes the soft X-ray peak. This would be the Neupert effect that results from the coronal energy reservoir filled by the flare energy release. 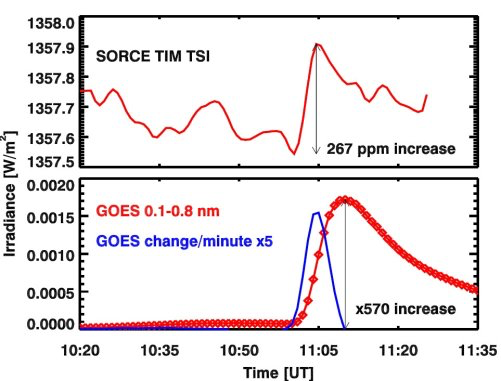 In the lower panel of Figure 2, the blue line is the time derivative of the soft X-ray light curve. This estimates the timing of the impulsive phase usually defined by nonthermal hard X-ray and synchrotron emissions. The variation in total irradiance appears to reflect this component as well as the gradual component.

Conclusion: are these events really analogous?

Certainly in many ways, these events are as analogous as the available data can show. But are we actually seeing a deviation from the solar pattern, and shouldn't we be paying more attention to that? The deviation is the extraordinarily simple light curves of the stellar flare. A solar flare of this magnitude would have a lengthy "impulsive" phase (this marks the nonthermal energy release), whereas this stellar flare came and went in only 20 seconds. It turns out that there is an apparently different class of solar flares, the "impulse response" flares. Maybe their discoverer - Stephen White - will do a future RHESSI nugget on the way these events work; in the meanwhile we need to keep our eyes open when declaring analogies, since it is in subtle differences that we may learn the most about causes and mechanisms.

We note in passing an even more remarkable flare recently reported on the flare star CN Leo by Schmitt et al. (Ref. [2]). The authors estimate that the bolometric luminosity of the star increased by three orders of magnitude in this case.

[1] "A coronal explosion on the flare star CN Leonis"

Hugh Hudson is a research physicist at SSL (Berkeley). Beate Stelzer is a Ricercatore Astronomo at the Osservatorio Astronomico di Palermo.