We focus on the recent solar history of Bastille Day (July 14), in preference to political questions. It is a somewhat astonishing fact that Bastille Day (more so than July 4th or Guy Fawkes Day) has seen more than its fair share of major solar flares (éruptions solaires). These include the remarkable event of July 14, 2000, still the subject of much discussion. See an earlier Yohkoh science nugget for full historical detail.

An X-class flare took place on this day, not a frequent occurrence during this phase of the solar cycle, when fewer energetic events happen (this was the first in more than six months). The plots below show X-ray emission from the Sun, and high-energy particles arriving at the vicinity of Earth almost simultaneously:

Although these events are rare, there have been many of them in the past (often on Bastille Day!). So why is this one interesting? The answer is simple: we are still grasping at straws trying to understand the basic physics, and each new event might provide a clue.

One possible clue here is the rapidity of the onset. As the X-ray plot (left above; click to enlarge) shows, at 5-minute resolution there was no "precursor" or specific warning that something was going to happen. With RHESSI we have a new tool that is more sensitive in searching for hints about event beginnings. Is that an advantage? The figure below compares RHESSI hard X-rays with GOES soft X-rays at the very beginning of the event. 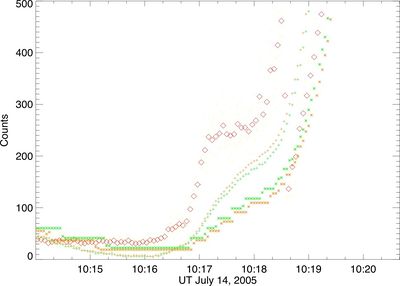 The very first-arriving X-rays may guide us to the physics of the eruption. In the plot RHESSI hard X rays (12-25 keV) are shown as diamonds and GOES soft X-rays as other symbols. Which comes first? Hard X-rays would identify a violent non-thermal phenomenon, and soft X-rays would implicate a weak, gradual energy release. It looks like the hard X-rays come first, but here is the lesson: it is hard to tell; it all depends upon detector sensitivity and manner of data display.

The time variations in this event are interesting, but the images are really interesting. The plots below show RHESSI hard X-ray images superposed on EUV images for two different times: 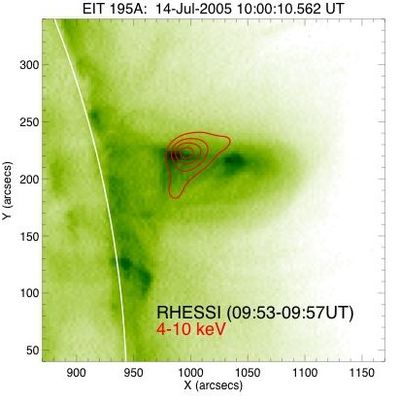 These images reveal that the flare occurred just beyond the W limb of the Sun. The preflare image (left) shows an odd arcade of loops left from the previous flare in the region. The flare image (right) shows that the RHESSI hard X-ray contours (and soft ones as well) hug the limb, as would be expected for the tops of unseen loops. The arcade is still there, but the EIT movie shows that our new Bastille Day flare simply blows this arcade away. This is somewhat unexpected, since a flare loop arcade is supposed to represent a theoretically stable configuration that would not be expected to blow up like this - it is itself the product of an instability. The movie is filled with interesting details even though there are too few frames! 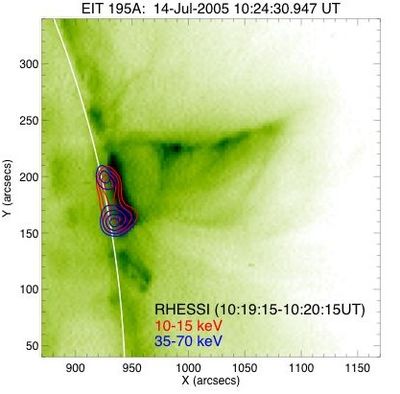 As usual, when one looks at one of these events in some detail, one is puzzled as well as amazed. This event warrants much further study than we can do in a day, and so we may report on it later. Biographical note: Säm Krucker and Hugh Hudson are members of the RHESSI group at UC Berkeley.