Normally, in a relationship we term the Neupert Effect, the hard X-ray time profile of a solar flare correlates roughly with the derivative of the soft X-ray time profile. This effect is named after Werner M. Neupert. The hard X-rays imply the presence of non-thermal electrons, and so the suggests that the main flare energy source is closely related to particle acceleration. In this Nugget we present an outstanding example of strong electron acceleration in a solar flare without a visible response in soft X-ray emission and propose its possible interpretations.

A highly pronounced and remarkable burst of hard X-ray (HXR) and microwave emission was observed by the INTEGRAL gamma-ray observatory, and by several radio telescopes. This burst came well into the decay phase of the major flare SOL2003-10-26 (Figure 1). Hereafter we will refer to this particular late burst as a "burst-on-tail" event by analogy with the bump-on-tail instability in plasma physics. Thus it is a "BOT." The BOT we discuss here occurred about an hour after flare onset. It had no significant counterpart in soft X-ray emission, and so this phenomenon is in some sense a definite violation of the Neupert effect. 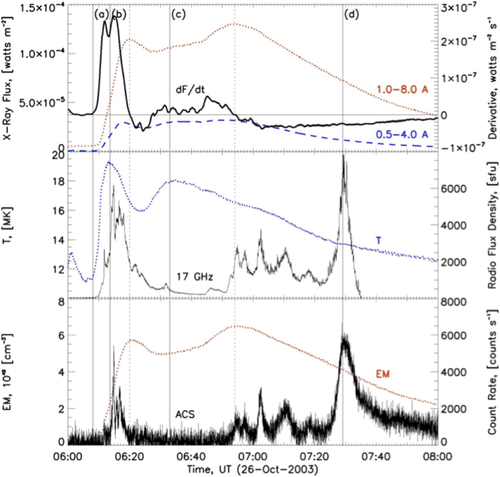 Unfortunately RHESSI observations of SOL2003-10-26 were sketchy because of interruptions. RHESSI missed the BOT completely by being in the South Atlantic Anomaly during the BOT, exactly according to Murphy's law. The only HXR instrument (known to us) that observed the entire event was the anticoincidence shield detector on board INTEGRAL, which does not provide spectral information. Due to INTEGRAL's eccentric orbit, with an apogee of approximately 150,000 km and a 72-h orbital period, INTEGRAL may continuously monitor solar high-energy activity for a period of more than two days in favorable conditions, an advantage in continuity over RHESSI's low Earth orbit.

The BOT event started with an apparently normal flare. The soft X-ray emission detected by GOES had two maxima (Figure 1). The first (at 06:20 UT) corresponded to the first and the largest plasma temperature maximum. The time derivative of SXR intensity before the first SXR maximum corresponds to the observed intensities of HXR and microwave emission, consistent with the Neupert effect. The Neupert effect was not observed for the delayed sequence of non-thermal bursts, the last and the strongest of which was the BOT. An intriguing fact is that the BOT was not associated with visible increases of SXR fluxes (i.e. increases of temperature and emission measure). In reality, some weak increase of SXR flux was probably produced during the BOT, but was hidden by a relatively strong decaying tail after the second "normal" SXR maximum.

We suppose that the flare plasma is heated by accelerated electrons. Firstly, it is possible to reduce the energy input of accelerated electrons for equal or even higher intensity of the HXR >100 keV intensity observed, and, consequently, to reduce the SXR intensity expected, if one reduces the spectral index of the power law, or increases its low-energy cut off. We cannot check this assumption for the event of 26 October 2003, since RHESSI spectra were not available.

Second, a response of flare plasma to similar populations of accelerated electrons injected into flare loops of different spatial scales may change drastically along with the flare development. The TRACE observations for this event showed that at the BOT time, the spatial scale of the observed loops was larger. This could lead to smaller values of temperature and emission measure in flare loops, thus to smaller SXR fluxes. In the limit case a plasma expansion may occur into open magnetic flux tubes after CME lift off. It should be noted here that a developing halo CME in this event was observed by SOHO/LASCO from about 06:54 UT. 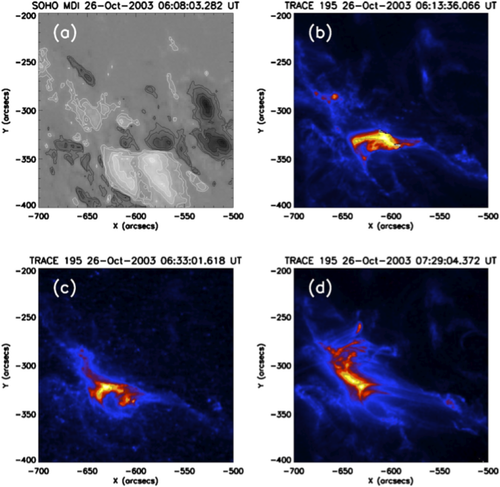 Figure 2: Images of the NOAA active region 10486 during the 26 October 2003 X1.2 solar flare. (a) Photospheric line-of-sight magnetogram obtained with the SOHO/MDI. The white and black lines are iso-contours at +-300, 500, 1000, 1500, and 2000 G levels. (b)-(d) Images of the active region made by TRACE at 195 A. The time of observation of each of these four images are shown in the titles and are marked by vertical solid lines and also by appropriate letters in Figure 1.

Why is the BOT important?

We observe bursts (e.g., our BOT) of non-thermal emission that are delayed by several tens of minutes, relative to the flare impulsive phase, and not reflected in the SXR emission. These show distinctly that acceleration processes in gradual solar flares may occur well after CME lift-off. This discovery is crucial for understanding solar acceleration of energetic particles. Continuous observations of solar hard X-ray and gamma emission by spectroscopic and imaging instruments aboard spacecraft in deep space, at the Lagrangian points, or in eccentric orbits with high apogees would be very helpful in resolving the open questions here.