The high temperature of the solar corona has several possible explanations, and correspondingly intense theoretical and observational work trying to identify the right one(s). In nanoflare heating theory, the corona is heated by a large number of small-scale flare-like events (nanoflares). If the nanoflare frequency is low, then some hot plasma should always exist in non-flaring active regions, since the apparently steady emission would reflect the lower average temperature of the nanoflare events. The detection of hot plasma in non-flaring active regions would therefore be indirect evidence of low-frequency nanoflare heating (a "smoking gun"). The absence of the hot emission can help to constrain the nanoflare frequency. The breadth of the distribution of emission measure if it is not isothermal, i.e. the "differential emission measure" (DEM), thus reflects the presence or absence of nanoflares.

It is hard to find faint hot-plasma emission with conventional non-monochromatic imagers (like AIA or XRT), because their images contain broad temperature contributions. This Nugget describes an upper limit on the hot-plasma DEM using direct observations of the hot plasma by the Mg XII spectroheliograph SPIRIT (Ref. [1]) onboard the CORONAS-F satellite observatory. This instrument imaged coronal hot plasma without any low-temperature background contamination. We compare the obtained limit with the result of recent numerical simulations and aim to place constraints on the parameters of the nanoflare-heating model (Refs. [2,3]).

The Mg XII spectroheliograph obtained monochromatic images of the solar corona in the Mg XII 8.42 Â line. This line emits mainly at temperatures higher than 4 MK. The Mg XII images do not contain a solar limb (hence no contribution from the general corona) or any other low-temperature background.

The Mg XII data (Figure 1) shows that only two types of hot objects were present on the Sun: the first are small isolated flare-like phenomena (Ref. [4]). During the period of observations, they occurred at a rate of about 20 per day. The second are large hot structures inside active regions. These are produced during flares or sequences of microflares. Their X-ray emission is highly variable. After the flare ended, these large structures faded away. 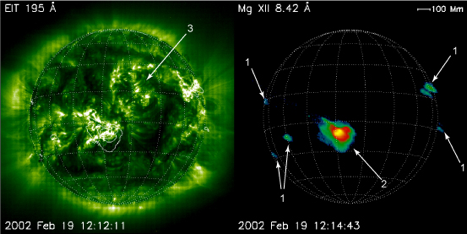 Except for rare microflares, there was no hot plasma in non-flaring active regions. Below we discuss this fact and try to estimate the upper limit of the hot-plasma emission measure and nanoflare frequency, which may be consistent with this lack of signal. 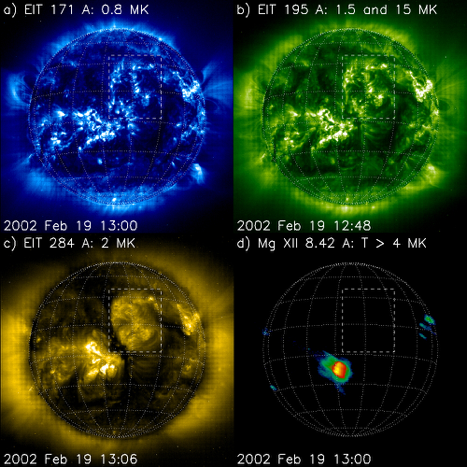 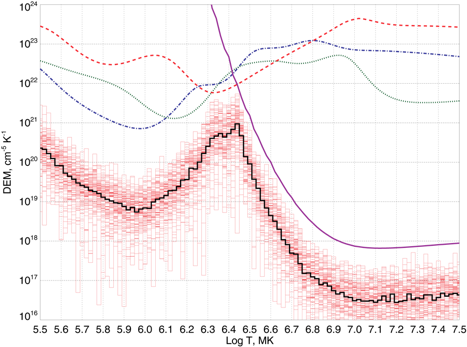 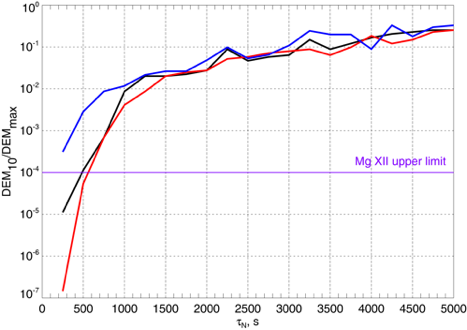 The CORONAS-F/SPIRIT data constrain the high-temperature DEM levels in the solar corona, and do not find any evidence for the "smoking gun" signature expected for nanoflare heating. Because the instrument is uniquely monochromatic, and because of the extent of the data, these constraints are the most direct ones yet published. The details of this analysis appear in Ref. [6].

[2] "Comprehensive Studies of Solar Activity on the CORONAS-F Satellite"