The corona is the hot outer atmosphere (about 1 MK) of the Sun that surrounds its cooler photosphere (about 5800 K). Although it is well known that magnetic energy is required to heat the corona to such high temperatures, the details of the processes that build and convert magnetic energy to heat the plasma remain poorly understood. One way to build up the required magnetic energy in the corona is through stressing and randomly shuffling the footpoints of coronal magnetic structures (https://en.wikipedia.org/wiki/Coronal_loop loops) in the turbulent photospheric convection. Parker [1] proposed that magnetic energy built up in this way could be liberated in the form of nanoflares (each with an energy content of about 1024 erg). These numerous magnetic reconnection events in the corona then could balance its energy losses due to radiation and conduction. However, these nanoflares and in particular, the spatial and temporal properties of the corresponding coronal magnetic energy release, pose observational challenges. This is mainly because the energy released in the corona is quickly distributed along the loops, owing to the efficient thermal conduction parallel to the magnetic field. This rapid redistribution of energy erases any information on the spatial and temporal properties of the magnetic heating in the corona and renders the observed coronal loops to be more of an aftermath of nanoflares. For this reason, studies focused on coronal heating have to generally rely on the thermal characteristics of the solar atmosphere and the local plasma evolution to infer the properties of nanoflares, and subsequently of the magnetic energy, which is a nontrivial problem. Recently inferred nanoflares in the cores of the solar active regions AR 11890 and AR 12234 have shed light on the nature of the magnetic energy release underlying those coronal events [Refs. 2, 3].

Nanoflares and their complex magnetic roots in the photosphere

Both these active regions displayed clear coronal loop brightenings associated with nanoflares, in multiple channels of the Atmospheric Imaging Assembly (AIA) onboard the Solar Dynamics Observatory (SDO) (see panels a and c in Figs. 1 and 2). Here we consider if magnetic reconnection at the footpoints of the loops could be responsible for these nanoflares. The photospheric magnetic field maps of these active regions from the Helioseismic and Magnetic Imager (HMI) onboard SDO provide the evolution of the magnetic field at the loop footpoints and in their surroundings. The coronal emission maps combined with the magnetic field maps reveal where the loop footpoints lie (see Figs. 1 and 2).

In both of the cases we observed magnetic flux cancellation near one footpoint of the coronal loop. This flux cancellation underlies the brightening of that footpoint observed in AIA channels sensitive to cooler plasma (< 1 MK). Similar and almost simultaneous brightenings are seen from both footpoints of the coronal loop recorded by the AIA 9.4 nm channel (sensitive to plasma at 7 MK). Our observations suggest that the magnetic reconnection at the footpoints is likely responsible for powering the nanoflare loops in these ARs. A complete description of our work can be found in a recent publication [Ref. 4]. 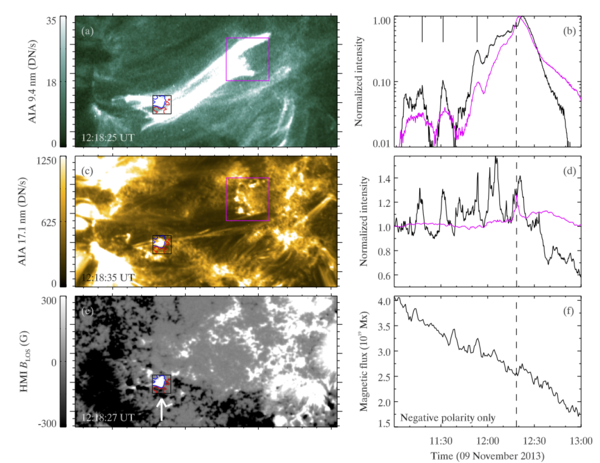 Figure 1: Nanoflare loop in AR 11890 and its association with the cancellation of surface magnetic flux. Panels (a) and (c) display the coronal emission maps obtained from the AIA 9.4 nm and 17.1 nm channels, respectively. In panels (b) and (d) we plot the light curves from the footpoint regions (black and magenta light curves are from the eastern and western footpoints, marked with the same coloured boxes in panels (a) and (c)). The short vertical bars in panel (b) point to the near-simultaneous peaks in the two light curves. (e) HMI line-of-sight magnetic field map, in which the positive and negative polarity field are represented by lighter and darker shadings. Magnetic flux near the eastern footpoint is enclosed by the black box. The coloured contours cover regions with a magnetic flux density of 75 G or more (blue: positive polarity; red: negative polarity). (f) Magnetic flux cancellation near the eastern footpoint of the coronal loop (black box in panel (e)). The vertical dashed line in the right panels marks the time-stamp of the corresponding spatial maps displayed on the left. From [Ref. 4], reproduced with permission © ESO. 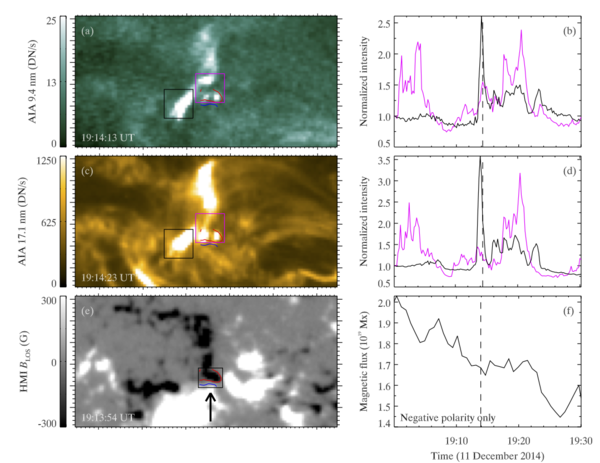 Based on observations carried out by HMI and AIA we propose that magnetic flux cancellation and reconnection in the lower solar atmosphere in active region cores are viable processes to liberate the magnetic energy to heat the plasma to high coronal temperatures. The process we suggest here for the heating of hot loops in active region cores should not be mixed up with the classical scenario for large flares where a long-term energy build-up leads to a sudden release high in the corona. Please see Ref. [4] for more details.

[1] “Nanoflares and the solar X-ray corona”