We're in an extended period of minimal solar activity (see Nugget 91 for a previous look at this issue - without flares, RHESSI is missing its most important observational work, and there has not been even a C-class flare yet this year. Will sunspots and flares ever return? How unusual is this behavior? In this Nugget we conclude that it is too soon to panic, but that certainly we're seeing an interesting diminished level of activity which most of us has not seen before.

The 10-cm radio flux from the Sun, with its daily index F10.7, is one of the basic standard tools for gauging the level of solar activity. This index has been generated in an unbroken string since 1947. It is derived from careful radio flux measurements made in Canada and pioneered by A.E. Covington. 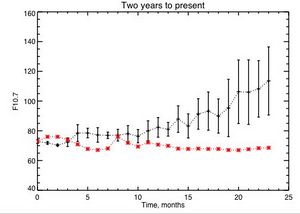 'Figure 1: The F10.7 index for the last 24 months (red) and the average variation, month by month since the peak of the corresponding maximum, for the four previous cycles in the record.

The figure on the left might give cause for alarm if one is interested in flare observation. It shows (red line) the variation of F10.7 monthly means for the two years prior to the present time. The black line shows the mean of the four previous cycles, registered by [summed epoch analysis] on simple Gaussian fits to their preceding maxima as references. The four time series from prior maxima from are averaged, using the Gaussian peak time as a reference, month by month; the range bars show the standard deviations of these means for each month. This procedure does not allow for the possibility of different cycle durations, something that seems fairly obvious from the sunspot record, but it is hard to be quantitative about this. Our approach here is to use the most direct approach to analysis of the most objective of the indices, and Figure 1 is the result. If one interprets the range bars as true error bars, and did not know (or believe) that cycles could have different lengths, this figure would provide compelling evidence that Cycle 24 is unique, and that it might be time for fans of solar flares to "panic." Our discussion below, however, shows that this would be premature.

A closer look (Figure 2 below) shows the daily values of three indices: F10.7, the total solar irradiance TSI, and the classical sunspot number. There is a clear apperance of an up-turn in the least "noisy" of these indices, F10.7, although there are other small variations that we do not understand well. But probably F10.7 is giving us an early warning about the sudden increase of Cycle 24 spots. These should appear within the next few weeks or months, though, so please check the daily updates of the indices on our Web page.

Counting the new and old spots 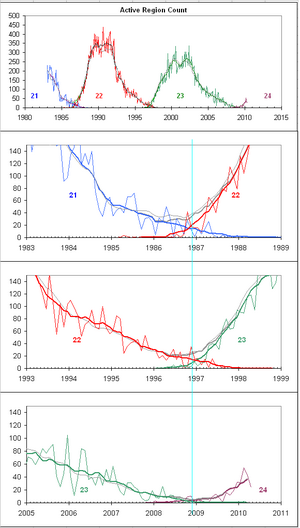 Figure 3: Recent solar minima decomposed using the 'region days' analysis into their old-cycle and new-cycle components. Note that the earlier minima had much more overlap between cycles, and hence more activity during their shorter intervals.

In Figure 3 we do a comparison of the contributions of old- and new-cycle activity to the minimum periods between Cycles 21/22, 22/23, and 23/24 (the present one). These are counts of 'region days' per month (normalized to 30 days), defined as the number of days when an active region (one with a NOAA number) was visible within 70 degrees of central meridian, and then summed for every region. Different cycles (as determined from the magnetic polarity of the spots) are coded with a different color. Yearly smoothed counts are shown as the 'smoother' curves. The detailed bottom three panels show blown-up views of the transitions between cycles. Note that the 23/24 transition is indeed diffferent, and that Cycle 24 has just barely begun (see also the weak increase in F10.7 visible in Figure 2).

Although this transition may look unusual to us, for the Sun it may just be business as usual. The current transition looks very much like the one between cycles 13 and 14, 107 years ago. Not only were the sunspot numbers (or 'region counts') very similar, but the heliospheric magnetic field back then behaved very similar to what we observe today, as seen in Figure 4. For information about the relationship of the heliospheric field to the solar field, and how it is measured, please see Reference [1].

In summary it is probably too soon to panic. In the modern era (Figure 1) there is no precedent for such a protracted activity minimum, but there are historical records from a century ago of a similar pattern. We do expect activity to pick up fairly suddenly soon. In the meanwhile this is a good opportunity to use the excellent new data available from many satellites and ground-based observatories without interference from new flux emergence. We can hope to learn a great deal about how low-level activity works in the network and in the polar caps.