A solar flare results from a sudden energy release involving magnetic reconnection in a domain containing free energy. A large fraction of the radiated energy originates in the chromosphere, so studying the chromospheric flare emission is therefore a key for understanding how the flare energy is transported and dissipated.

In this Nugget we describe the flare of March 29, 2014 17:45, SOL2014-03-29 (X1), from the point of view of the excellent chromospheric observations now becoming available both from ground-based data and new satellite data. Our ground-based data come from the Sacramento Peak Observatory in New Mexico, where the Dunn Solar Telescope makes observations with the IBIS imaging spectrometer, observing in this case H-alpha and the Ca II 8542 Å line. These lines,from singly-ionized ions, form at different heights and cover the whole chromosphere. They thus provide excellent diagnostics for the flare response of the lower solar atmosphere.

Estimation of the electron distribution

The analysis reported here [1] assumes the electron beam ("thick-target") model, wherein electrons accelerated in the corona precipitate into the lower atmosphere, heating it. We model the temporal evolution of the electron heating self-consistently from the integrated X-ray spectra obtained by RHESSI. The spectra were fitted to a thermal component plus a thick-target, non-thermal component. To estimate the electron flux, we divided the power of non-thermal electrons by the cross-sectional area of the footpoints in IRIS images (2796 Å). Figure 1 shows these parameters. 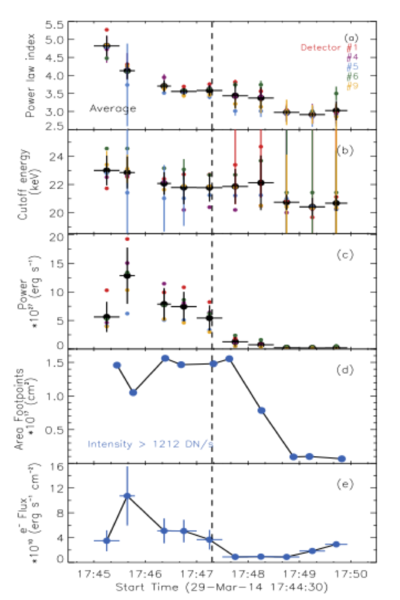 The RADYN radiative-hydrodynamics code [2,3] has done the hard work of following how the atmosphere responds to the energy deposited by the non-thermal electrons. We constructed a multi-threaded flare loop model and used the electron flux inferred from RHESSI as the input to the radiative hydrodynamic code RADYN to simulate the atmospheric response. The temporal evolution of the threads was estimated from the temporal derivative of the GOES 1-8 Å light curve, assuming that each spike corresponds to a single burst. 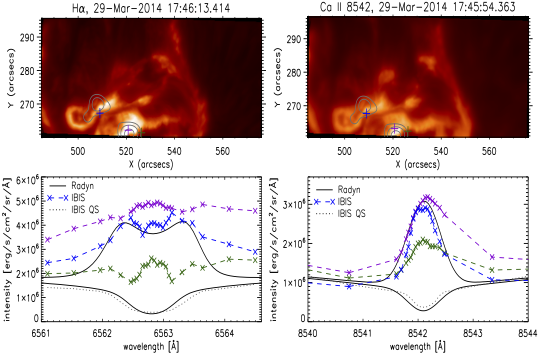 Figure 2: he H-alpha and Ca II 8542 Å line profiles synthesized from RADYN (black solid line) and observed by IBIS at 17:46:13 UT+18 s and 17:45:54 UT+18 s, respectively, and at different locations along the ribbons of the flare (purple for the southern ribbon and blue for the northern ribbon) and outside (green). The black dotted line is the IBIS quiet Sun profile calibrated to RADYN.

In general, the synthetic intensities agree with the observed ones. The simulated MgII h&k line profiles have narrower wings than the observed ones. This discrepancy can be reduced by using a higher microturbulence velocity (27 km/s) in a narrow chromospheric layer. An increase of electron density in the upper chromosphere within a narrow height range of 800 km below the transition region can turn the simulated MgII line core into emission and thus reproduce the single peaked profile, which is a common feature seen in all IRIS flares.

[2] "Does a nonmagnetic solar chromosphere exist?"