The solar corona is an unusual mechanical system, constructed mainly out of magnetism. It normally sits in an equilibrium state, which implies that small perturbations may result in oscillations. These indeed were predicted and then observed, when EUV observations of coronal tracers attained high enough resolution. An arcade of coronal loops can exhibit a whole array of coupled oscillations, as in this movie for example. These oscillations damp rapidly and have been given the name "quasi-periodic pulsations" or QPP. We have already had several Nuggets ([1], [2], [3], [4], [5]) on various aspects of this remarkable phenomenon. Magnetohydrodynamics (MHD) theory provides a convenient framework for explanations.

A recent Nugget by Nakariakov & Zimovets ([5]), suggested that quasi-periodic pulsations (QPP) might be explained in two-ribbon flares via slow MHD waves. A magnetized fluid can support a more complicated array of wave motions than a simple fluid, and in the MHD theory these are generically termed Alfvén waves. The QPP would be temporary standing waves corresponding to this theory; they can therefore be used to explain periodic-appearing variations in the emission from solar flares. QPP can be seen in flaring lightcurves at a variety of wavelengths, from radio waves to soft and hard X-rays. The characteristic timescale of these variations can vary from just a few seconds up to several minutes, but their root causes remain the subject of some debate. 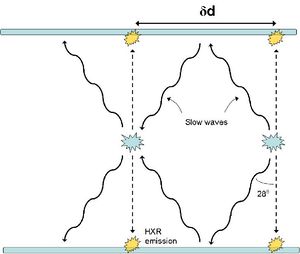 Figure 1: Two-dimensional cartoon of a two-ribbon arcade, illustrating the path slow waves might travel after being excited by an initial energy release. The waves travel at an angle the magnetic field, propagate down to the arcade footpoints, then reflect and travel back up to the corona and recombine at a point further along the arcade. This triggers additional energy release and causes hard X-ray emission.

This new theory suggested that slow waves, excited by an initial energy release, could propagate at an angle (25-28 degrees) to the magnetic field linking flare ribbons, reflect in the chromosphere and recombine in the corona at a site further down the flaring arcade, causing another energy release. This process would then repeat all the way down the arcade (see Figure 1 for a cartoon example of this behaviour). These energy releases would then lead to the pulses we observe in flare lightcurves. RHESSI, with its sensitivity to the hard X-ray regime, is a regular observer of these pulsations.

Our approach was to consider what observational signatures this kind of regime may have, and then search for these signatures using RHESSI, combining both lightcurve and imaging data. For this case study we selected three flares, from 2002 November 9, 2005 January 19 and 2005 August 22. RHESSI's imaging capability allows us to measure the movement of the hard X-ray footpoints for these flares. We tested two main ideas; a) whether there is a link between the footpoint separation and the interval between pulses, and b) whether there is a clear difference in the footpoint velocities at lightcurve peaks compared with lightcurve valleys. Finally, we look at some of the values we might expect from the presence of slow waves and compare them to what we actually observe.

Figure 2: Change in the footpoint locations for three two-ribbon flares over time: 2002 November 9 (left), 2005 January 19 (centre) and 2005 August 22 (right). The colour coding is such that red represents the beginning of the flare, where pulsations begin, and blue marks the time when pulsations have effectively ended, thus time progresses from red to blue.

Our second test involves measuring the velocity of footpoints as they move along the arcade ribbons. If the slow wave mechanism were to be true, we might expect the footpoints to jump from one location to another, rather than progressing smoothly along the ribbon. As a result the velocity of the footpoints would be roughly zero while the hard X-ray pulse was occuring, but large or discontinuous in the intervening time. Figure 4 shows our measurements of the 2002 November 9 flare. In the top panel we track the distance travelled by both footpoints from their starting locations at the flare onset. For this flare both footpoints travel more than 30 Mm along their respective ribbons, over a timeframe of 10 minutes. The centre panel shows the velocity as a function of time of these footpoints, while the bottom panel shows only the measurements made at the times when lightcurve peaks and valleys occur. 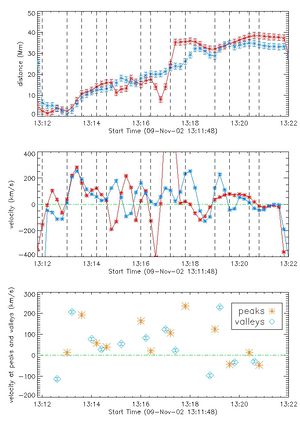 Figure 4: Motion of the hard X-ray footpoints during the solar flare of 2002 November 9. Top panel: the displacement of the left-hand (red) and right-hand (blue) X-ray sources as a function of time. Central panel: The velocity of the footpoints as a function of time. Bottom panel: Footpoint velocity measurements for the left-hand (red) source taken at each peak (orange) and valley (blue) of the lightcurve observed by RHESSI.

For this flare we did not see a systematic difference in footpoint velocities between lightcurve peaks and valleys. The bottom panel of this figure shows that the instantaneous velocity measurements are quite widely scattered, but that the valley measurements (blue points) are not obviously closer to zero than their orange counterparts (peaks). We performed the same measurements for the other two flares, with similar results - but for brevity we omit them here.

Our two observational tests did not yield any straightforward evidence showing that slow waves are present in two-ribbon flares. One more test remains, which is to predict the expected value of some of the flare parameters if slow waves were indeed involved. We focus on the expected distance footpoints travel between successive pulses, d, and the expected time between pulses, t. According to the work of Nakariakov & Zimovets, the most likely angle of propagation for the slow waves is 25-28 degrees (see Figure 1). We can combine this information with our measurements of the footpoint separation to guess the dimensions of the flare arcade. This allows us to estimate how long it would take a slow wave to complete one reflection and recombine in the corona (t), and also how much further along the arcade this recombination site would be (d).

Although these estimates rely on a simplistic model of the arcade, the difference between the estimates and the observations is not just a small percentage, but several factors. Combined with the null results for the other observational tests, it leads us to conclude that it is hard to explain these three flares in terms of reflecting slow waves. The main issue for the prediction of parameters is the angle 25-28 degrees. Although the fastest slow waves in the distribution travel at this angle, it is too wide to maintain consistancy with observations. A narrower propagation angle, say 5-10 degrees, would help bring the estimates of t and d in line with observations. Such an angle could be consistent with slower-travelling slow waves, where the bulk of the wave energy may be contained.

Andrew Inglis is currently a NASA Postdoctoral Fellow based at NASA Goddard Space Flight Center. Brian Dennis is the Mission Scientist for the RHESSI instrument. This nugget is based on recent work.