The classical picture of a solar eruption envisions a large-scale current sheet. This critical structure supports the development of magnetic reconnection and connects the solar flare to the coronal mass ejection (CME). An energetically significant population of energetic electrons (and other particles) can be released bi-directionally during the magnetic reconnection in the current sheet. These energetic electrons can emit in X-rays through bremsstrahlung radiation and at radio wavelengths through the gyrosynchrotron mechanism. X-ray sources may appear at the two tips of the current sheet (corresponding to the top of the flaring loops and the wake of the CME) in the corona, as well as the foot points of the flare loops, where significant interaction of these electrons with the background plasmas is expected. Thus, besides the usual footpoint HXR sources, the presence of a pair of coronal X-ray sources can be expected from this model.

This double coronal X-ray source morphology was first reported in Ref. [1], via RHESSI observations, and has been described in an earlier Nugget as well. Ref. [1] and its followup studies have been taken to be major observational confirmation of the the existence of a reconnecting current sheet (lying in between the two sources) that acts as the expected bidirectional energy release site of a solar eruption.

Here we present a study on double coronal sources observed in both HXRs and microwaves, revealing new characteristics distinct from earlier reports, from which we propose a novel mechanism to interpret the generation of the coronal double-source structure, in particular, of the upper source.

This double-source event is associated with a footpoint-occulted X1.3-class flare (SOL2014-04-25, starting at 00:17 UT) and a coronal mass ejection that are likely triggered by the process termed "magnetic breakout". The event is observed by the Atmospheric Imaging Assembly (AIA) on board the Solar Dynamics Observatory (SDO) as a nice limb event. The limb perspective allows direct and clear imagery of the thermal and dynamical consequences of the process of magnetic breakout reconnection, without interference from the strong and complex disk emission (Ref. [2]).

The identification of the process of magnetic breakout reconnection flows from the remarkably close match between the theoretical model and the appearance of the coronal configuration as viewed from the hot passbands of AIA. Figure 1 (from Ref. [2]) shows these features: the presence of a heated and slowly-evolving X-shaped morphology, pairs of cusp-like structures and the sequential brightening of loops around this X feature.

Figure 1: A 3D cartoon for typical breakout configuration and a rotated pre-eruption AIA image of the event. Panel (a) shows key breakout components, including the central arcade (blue), sidelobes (green), and overlying arcade (red). The purple arrow points at the magnetic null. Field lines undergoing reconnection across the null are cusp-like and in yellow. The cyan line represents energized magnetic structure underneath the central arcade. Colors on the bottom represent magnetic polarities, white (black) for positive (negative).

The double sources, observed in HXRs by RHESSI and at 34 GHz by the Nobeyama Radioheliograph (NoRH), appear during the impulsive stage of the event when the ejecta moves outward to a certain height and the side lobes that were previously pushed aside now start to move towards each other (or squeeze-in) at a very fast pace (~220-270 km/s on one side). The lower X-ray source extends upward from the top of the partially-occulted flare loops and the upper source is co-incident with rapidly approaching side lobes (Figure 2). 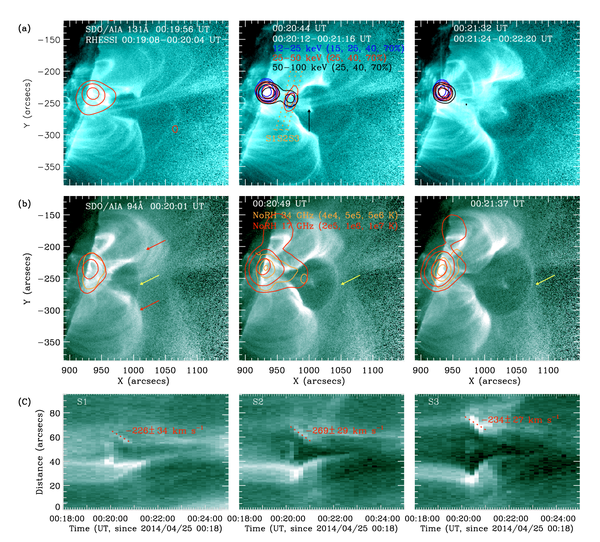 Figure 2: Overview of the impulsive stage of the breakout event. (a-b) AIA 131 and 94 Å images, overlaid by (a) RHESSI contours and (b) the 17-34 GHz microwave TB contours, with levels given by percentages of the maximum HXR flux for corresponding energy band and the microwave TB maxima. (c) distance-time maps for slices S1-S3 (the starting point is marked by a short dash). Dashed lines in (c) represent linear fits to estimate velocities. The black arrow in (a) points at the bright ejecta, the yellow and red arrows in (b) point at the expanding current sheet and the pair of side lobes, respectively.

The upper source appears at energies as high as 70-100 keV. This source has a different time profile from that of the lower source, a weak energy dependence of projected centroid altitude above 20 keV, a shorter duration and a HXR photon spectrum slightly-harder than those of the lower source (Figures 3 and 4).

Figure 3: Energy dependence of centroid distances of the upper and lower X-ray sources at different intervals. 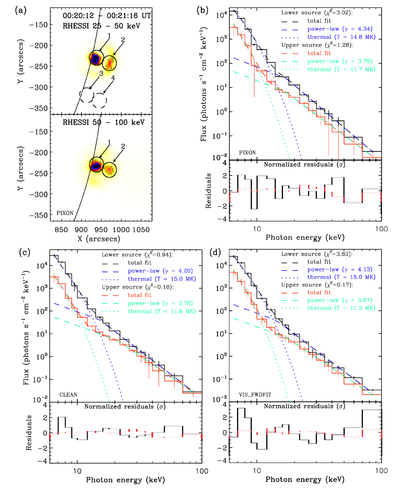 Figure 4: (a) Hard X-ray images given by the PIXON method to indicate the selected areas used to obtain the X-ray fluxes and imaging spectroscopy for the upper-lower (2-1) sources, and the corresponding background fluxes (4-3). (b-d) X-ray spectra and spectral fits of the double sources deduced with different algorithms (PIXON, CLEAN, and VIS_FWDFIT) within selected areas. The spectral fits are given by a thermal (dotted) plus a broken power-law (dashed) model.

The microwave emission at 34 GHz also exhibits a similar double source structure and the microwave spectra at both sources are in line with gyro-synchrotron emission given by non-thermal energetic electrons.

These observations, especially the co-incidence of the very-fast squeezing-in motion of side lobes and the upper source, indicate that the upper source is associated with (possibly caused by) this fast motion of arcade of loops.

Through the above observations, we suggest that the fast approaching (or squeezing-in) motion of magnetic loops plays an important role in generating the upper HXR and microwave coronal source.

The approaching motion of side lobes can effectively squeeze the field lines on the two sides of the tail of the ejecta along which the presumed vertical current sheet is located. This results in additional inward pressure that may have significantly enhanced the rate of reconnection (driven by the very-fast inflows) and thus the electron acceleration at the wake of the ejecta. In addition, pre-accelerated electrons (released by the on-going flare process) may be present as seed particles available for further acceleration around the upper source.

This presents a fast squeezing-in picture for the origin of the localized upper coronal source, and explains why the upper source is ~40 arcsecs away from the lower source (among events with the largest double-source separation distance ever reported) with a power-law spectral index harder (by ~0.5) than that of the lower source. The upper source is not necessarily located at the upper tip of the reconnecting current sheet and related to the bidirectional energy release of reconnection across the large-scale current sheet, as usually assumed.

Note that the essential element of the above scenario, i.e., the squeezing-in motion of arcades along the tail of the ejecta, may take place as long as the eruption originates from a multi-polar configuration, where surrounding arcades are first pushed aside by the ejecta and then bounce backwards rapidly. This may result in enhanced pressure towards the tail of the ejecta (likely with a developing current sheet) and efficient reconnection and electron acceleration therein, regardless of the exact triggering process of the eruption (being a magnetic breakout or not). Thus, the proposed scenario for the upper source is mainly related to the global magnetic configuration rather than the exact triggering mechanism. Further studies are required to see whether more events are in line with this scenario.