EVE/ESP and the Neupert Effect

This Nugget follows a previous Nugget introducing EVE spectroscopy and its applications. Here we will look at the ESP component of EVE. The EVE data include a broad-band photometric observation of solar soft X-rays (nominally 0.1-5.9 nm), similar to the standard GOES photometry at 1-8A, but better in some ways. In illustrating these data we refer to the flare SOL2011-02-24, a limb event with white-light continuum emission (as in SOL2010-06-12, the subject of our previous Nugget). Because EVE (and its component ESP) observe in the extreme ultraviolet, where opacities are large, a limb event will systematically differ from a disk event in its morphology - not only because of [limb darkening], but also because of absorption by structures intervening on the line of sight.

Figure 1 shows some of the ESP data in the same format as for our Nugget. The excellent SNR of the ESP "zeroth order" channel, the soft X-ray band is clear from the smoothness of its curve (lower right). We illustrate this by comparing directly with GOES for this event, in Figure 2. This reveals several differences. The ESP response extends to longer wavelengths, and so the flare excess does not have such great contrast relative to the pre-flare solar background. The ESP response lags the GOES response, again the result of its seeing longer wavelengths. It is beyond this Nugget to be precise about this, but one possible contributor to the flare signal might be the Fe XVII line at 15.015A, for example (see Chianti). This would not be so strong in the quiet Sun, though, so ESP is seeing other spectral features in its solar background levels.

RHESSI shows the flare evolution in its images very nicely. Indeed the quick-look images (low resolution, not optimized, and obtained directly from the RHESSI Browser, nicely capture the relative heights between sources at different energies. Figure 3 shows the soft 6-12 keV X-rays to be above the limb, as expected from coronal magnetic loops filled with hot plasma, whereas the 50-100 keV hard X-rays are on the disk and presumably the footpoints of these coronal loops. 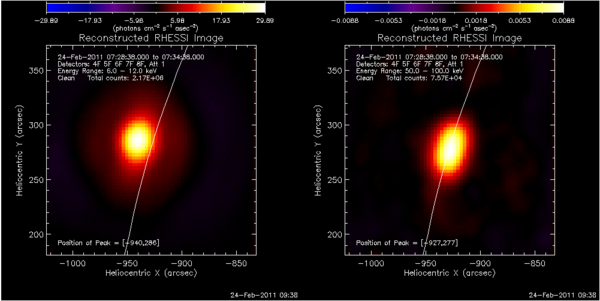 Figure 3: RHESSI images, from the quicklook images, for SOL2011-02-24. This compares the low-resolution file images for 6-12 keV (left) and 50-100 keV (right), showing the looptops at a higher altitude than the footpoints. In fact this white-light (and gamma-ray) flare was on the visible disk, rather than being occulted.

One very nice feature of the ESP soft X-ray data is the precision with which they can be differentiated. Generally it is bad to differentiate data because it amplifies random (or systematic) noise, but here it works well possibly due to the little amount of noise and the high temporal cadence. Figure 4 compares the ESP derivative with the RHESSI >100 keV counting rate. In the absence of RHESSI or comparable hard X-ray data, such a derivative of soft X-ray light curve (usually with the GOES data) is often used as a proxy for the impulsive phase. This is the relationship known as the Neupert Effect, named after NASA's solar EUV pioneer Werner Neupert. The simple explanation of the Neupert effect is that the corona acts as a reservoir for hot plasma generated in the impulsive phase of the flare; the reservoir fills up as the energy is released.

The comparison in Figure 4 shows again that this is a very crude matter. In this flare we see some similarities, but not at all a detailed match. Thus in this case (as in many others) the Neupert Effect shows the impulsive phase in general terms, but not exactly as seen in hard X-rays. "One swallow does not make a summer," though, and this single comparison does not mean very much. We suggest that part of the discrepancy here might be the ESP long-wavelength response in a limb event: there could be obscuration of some parts of the EUV sources. 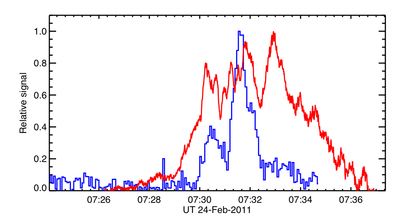 Figure 4: Does the Neupert Effect really apply here? This is a comparison of the differentiated soft X-ray signal in the ESP zeroth-order record (red) with the RHESSI >100 keV counting rate (blue). We can see similar features, and both leads and lags, but also striking discrepancies. On the other hand, both time series start and stop in the impulsive phase of the flare, so on the longer time scales the Neupert Effect works well. In detail, the discrepancies are probably very interesting when studied using AIA images.

In this Nugget we have shown off some of the excellent ESP data for a particular flare, one of SDO's few gamma-ray flare events. We find that the ESP soft X-ray channel has high signal-to-noise ratio and can therefore be used to make a clean time derivative; in this case a direct comparison with RHESSI at high energies (>100 keV) does not show an exact match, suggesting that complicated physics is at work in the flare development. Probably this is just confirming that the high-energy electrons responsible for 100-keV hard X-rays penetrate too deeply into the solar atmosphere to be effective as a source of the evaporative flow. Possibly there would be a better match with, say, 20-keV hard X-rays. In any case, the beautiful SDO data should help us straighten these things out.