The acceleration of high-energy particles has long been recognized as one of the fundamental characteristics of a solar flare.

The hard X-ray images (Figure 1) of the solar flare SOL2013-11-09 (C2.6) show three sources [1]. One of them was located between two others and characterized by the strong hard X-ray emission dominated in some time intervals. This appears to correspond to the looptop. 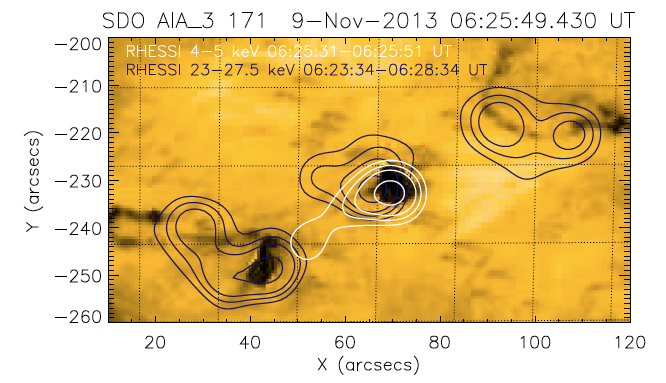 The RHESSI imaging appears to resolve this looptop source as a dense structure [1], [2], with estimates of ne ~ 3 x 1011 cm-3 and a characteristic size L ~ 9-18 arcsec. These estimates apply at the time of maximum of the hard X-ray emission (06:25:41~UT) in terms of the simultaneous Hinode/EIS observations [1]. The high plasma density suggests that accelerated electrons must lose the kinetic energy quite rapidly while propagating from the looptop to the footpoints. In particular, supposing the coronal loop column density N = nL/2 = 1-2 x 1020 cm-2, and that the cosine between the direction of the magnetic field and the electron velocity μ = 0.5, we find that accelerated electrons will be collisionaly stopped in the coronal part of a flare loop if their energy E < Eloop ~ 10 (N19/μ)1/2 = 45-63 keV, where N19 = N/1019

The relationship between the spectral fluxes of hard X-ray emission at the coronal part Ilp and the footpoints Ifp, as predicted by the collisional thick target model, can be represented as [3]

where B(a, b, c) is an incomplete beta function and δ is the spectral index of the electron flux. Then, adopting delta = 5.6 and ε/Eloop = 0.5, we find Ilp/ Ifp ~ 11. The estimate thus obtained contradicts the observed intensities of the hard X-ray sources in the energy range 23.0-27.5 keV (see Fig.1) and demonstrates that the standard solar flare model requires at least some modifications.

The discrepancy between the model estimates and hard X-ray observations suggests that electron acceleration can occur not only in the coronal part of a loop but also in the footpoints. This inference agrees well with the idea of re-acceleration [4] and in addition with the solar flare model proposed by Zaitsev and Stepanov [5]; see also [6]. Note that an extended acceleration region in the corona does not significantly improve the relationship (1) since the generation of the hard X-ray emission in the coronal part will be more effective in this case.