Solar eruptive events (SEEs) consist of flares and their associated coronal mass ejections (CMEs). They are the most energetic transient events in the solar system. Over a period of tens of seconds to minutes, they can convert upwards of 1032 ergs of energy stored in current-carrying magnetic fields into accelerated particles, heated plasma, and ejected solar material.

The partition of this released energy amongst these component parts has, until recently, been estimated for only a few events. In a paper to be published in the November 2012 issue of The Astrophysical Journal [1], observations of thirty-eight large solar eruptive events made with over a dozen different spacecraft instruments have been used to produce the first statistical analysis of the energy partition throughout the various manifestations of an SEE. The paper studied the energy content of eleven different manifestations, namely -

Comparing the energy content of the different SEE components with one another provides significant insight into their relative importance in the overall energy budget. An example is shown in Figure 1(left), where, for each event, the energy in flare-accelerated particles (electrons plus ions) is plotted against the peak energy content in the soft-X-ray-emitting plasma. The points are clustered around their (logarithmic) centroid (indicated by a “bull’s eye” symbol), with its coordinates in units of 1030 ergs indicated at the top left of the figure. Dashed diagonal lines corresponding to ratios of 1%, 10% and 100% are shown. Although the ratio of energy components varies from only a few percent to almost 100%, the position of the centroid shows that, taken as a “forest” rather than individual “trees,” about 10% of the energy content in accelerated particles ends up in hot plasma. Another example is shown in Figure 1(right), which compares the free energy in the magnetic field with the energy in the CME. The points in this figure are clustered more closely than those in the left panel, and the centroid shows that on average about 20% of the available magnetic energy is released in the CME, although the ratio can vary from a few percent to ~50%.

Figure 1: Left, comparison of the energy in accelerated particles with the energy of the hot plasma (the soft X-ray source); right, similar comparison of the free energy in the magnetic field with the energy of the CME. The left panel shows that roughly 10% of the energy from the particles winds up in the plasma, and the right panel shows that the CME can consume a sizeable fraction of the available free energy estimated for the region. The diagonal lines show ratios of 1%, 10%, and 100%.

The panels in Figure 1 also show ellipses that trace the 2σ statistical deviation limit in both overall event size S = √(XY) and ratio R = Y/X. Events that lie outside these ellipses are regarded as “outliers” and are labeled by the event numbers assigned in the paper, rather than generically by triangles. For example, in Figure 1 (right), events 1, 12, and 25 are “outliers.” For event 1 (2002 February 20, 05:52 UT), this simply indicates a relatively low conversion of magnetic energy into CME energy. For event 12 (2003 October 28, 09:51 UT), it indicates an unusually large event, one of the very large events in the “Halloween flares” of October/November, 2003. However, the reasons for the unusually low ratio of CME energy to magnetic energy in event 25 (2005 January 20, 06:36 UT) are more intriguing. This event also had a very high ratio of SEP to CME energy and was the only event studied that had a bolometric radiated energy that was larger than the energy in the CME. It has therefore been suggested that the SEPs in this event were accelerated not in a CME-driven shock, but rather in the flare itself.

Only for six of the events studied could all eleven energetic components be measured. Figure 2 shows the (logarithmic) average values of these energetic components, together with their 1σ "uncertainties" determined from the scatter of the values. This figure establishes the following energy budgets for a “typical” large SEE. Of the ~1033 ergs of available magnetic energy, approximately 30% is released in the SEE, with the remainder staying in the active region as stored magnetic energy. Of the ~30% that is released, some 80% (~25% of the available energy) is released in the CME (mostly as kinetic energy) and approximately 20% (~5% of the available energy) is released as flare-accelerated particles, roughly evenly distributed between electrons and ions. 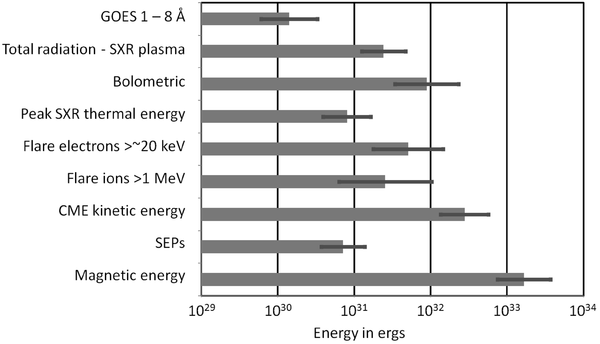 Figure 2: Average (logarithmic) values of the energetic components, together with their 1σ "uncertainties" determined from the scatter of the values, for the six events for which all component eneergies could be determined.

A major fraction of the energy in the flare-accelerated particles appears to ultimately emerge as radiation across a wide range of wavelengths, from optical to soft X-rays. However, only about one-third of the energy in flare-accelerated particles (~2% of the available stored energy) is ultimately radiated from high-temperature soft X-ray-emitting plasma. The maximum amount of energy stored as enhanced thermal energy in the soft X-ray-emitting plasma is ~1% of that released, and the amount of energy radiated in the diagnostic GOES 1 – 8 Å waveband is only about 5% of the total energy radiated by the SXR-emitting plasma, or a mere one-tenth of a percent of the available magnetic energy. Because of the need for a CME to "overtake" the solar wind and form a shock front where SEPs can be accelerated, only about two-thirds of the kinetic energy carried by the CME (~15% of the available magnetic energy) is available for SEP acceleration. The SEP production process is in turn ~4% efficient, so that only about half a percent of the released magnetic energy ultimately appears in the form of SEPs.

As well as establishing the above general partitioning of energy amongst its various manifestations in large SEEs, the paper also concludes that the energy radiated by the SXR-emitting plasma exceeds, by about half an order of magnitude, the peak energy content of the thermal plasma that produces this radiation, a situation that requires continuous re-energization of the hot plasma throughout the flare. Also, the energy contents in flare-accelerated electrons and ions are comparable, and together they are sufficient to supply the bolometric energy radiated across all wavelengths throughout the event. Finally, the paper finds that, in general, the available magnetic energy is sufficient to power the CME, the flare-accelerated particles, and the hot thermal plasma. This reaffirms the generally-held belief that the fundamental power source for SEEs lies in stressed active-region magnetic fields.