The Sun is now entering a period of twilight, punctuated only occasionally by what RHESSI was designed for: powerful solar flares. We call this time "solar minimum" because it is the minimum of the sunspot cycle. Just because the Sun is quiet, however, does not mean that RHESSI's exploration of the solar high-energy spectrum comes to an end. There are numerous reasons to expect that high-energy radiation (X-rays and gamma-rays) will be present anyway as emissions from the otherwise quiet Sun. If so, and this is a little adventure introduced here, we can learn about one or more of these speculative subjects for the first time. The quiet Sun is so dark that it might be negatively bright, in the sense that the Sun could appear as a large absorbing mass against the rather intense diffuse cosmic X-radiation.

One might think that assessing the spectrum of the Sun - our nearest star, after all - would be a high priority. But no. The "current" literature consists basically, so far as we can tell, of one paper written almost half a century ago!

It turns out that the darkness of the Sun, as an absorber of distant sources, is probably not as dark as actual solar sources are bright. We expect to discover one or more of several emission mechanisms known to exist but ill-understood. These include (not exclusively)

The quiet Sun is rather difficult to observe as it is tricky to distinguish between the Solar signal and the background (either instrumental, cosmic or terrestrial). One way to get around this is to point RHESSI slightly away from the Sun, so as the satellite spins the Solar signal is modulated. A cartoon of this can be seen in Figure 1: 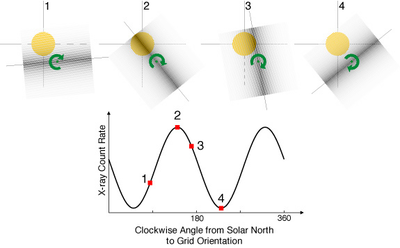 Figure 1: The observed Solar signal through one of the pairs of grids on RHESSI with the satellite pointed slightly away from the Sun. Shown is a single grid in four different orientations, illustrating the resulting counts that RHESSI would detect. The regions of greatest grid transmission (detection efficiency) occur where indicated by the darker lines, and RHESSI will detect more counts when this region of the grid is aligned with the X-ray source - either a small one, such as a flare, or the whole Sun in the case of a more diffuse source.

So by knowing where RHESSI is pointing, we can predict where in each rotation the Solar signal is, and fitting a sinusoid to this data the amplitude of which gives you the quiet Sun signal. Of course things are slightly more complicated than is shown in Figure 1 as the signal observed during times of quiet Sun is very small. To improve our signal-to-noise we stack (or bin the data according to the rotation angle) over hundreds of rotations while the satellite is roughly pointing in the same direction. We do this for as many as possible quiet times over the offpointing period and then combine the stacked time intervals to which we fit the sinusoid, and derive an estimate of the quiet Sun signal, or its upper limit.

To test that this procedure actually works we track the signal of a small flare, GOES B1.8, that occurred during the offpointing. Since the flare has a larger signal than the quiet Sun, it should easily be seen in the data. And it is, as you can see in Figure 2, which shows the lightcurves measured in each of RHESSI's nine detectors over 10 rotations. 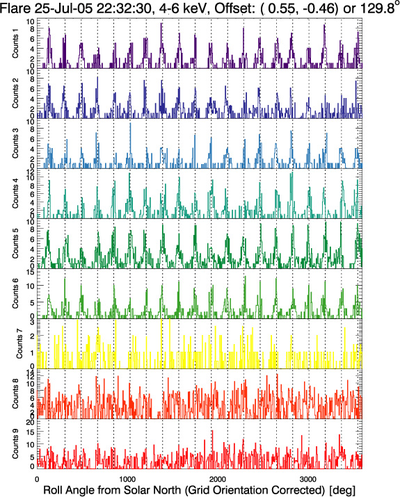 Figure 2: The RHESSI lightcurves for each of the nine collimators during a small flare, in the 4-6 keV energy band, that occured during offpointing. The dotted vertical lines are our prediction of where the maxima should occur, i.e when the grids are parallel with the line between Sun centre and RHESSI rotation axis.

This Figure clearly shows we are getting the expected modulation of the Solar signal and we can predict where the maximum in the data is occurring. The modulation is only apparent in the first 6 collimators as they have the smallest field of view: the other grids always see part of the Sun as it is always still in their field of view, despite the offpointing. Although the flare signal is easily seen we still want to confirm that the expected signal is seen in the stacked data, as practice for the quiet-Sun integrations. The stacked data for 60 seconds of this small flare in 4-6 keV is shown in Figure 3: 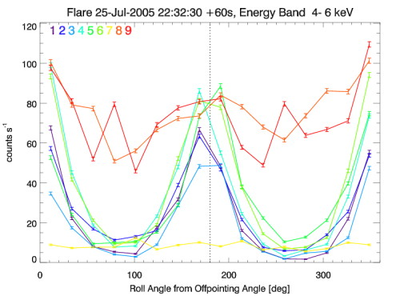 Figure 3: The stacked RHESSI lightcurves for each of the nine collimators during a small flare, in the 4-6 keV energy band, which occurred during offpointing. The dotted vertical lines show our prediction of where the maxima should occur; as the roll binning angle has been corrected for the offpointing angle, this should be 0° and 180°.

The first of these offpointing exercises have been carried out during 2005 (for a few days in July and then October when the GOES X-ray flux fell below A-Class) and from which we have some tentative results, as shown in Figure 2: 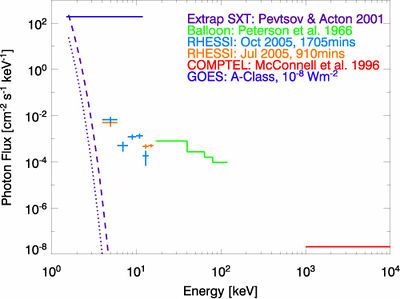 Figure 4: The observational limits on the quiet-Sun X-ray spectrum from previous data and from our preliminary RHESSI estimate using the offpointing technique, as detailed in this Nugget. Only RHESSI can put useful limits in the 3-17 keV range, thanks to its innovative attenuating shutters, but we can compare the limits to the 1966 balloon data above 17 keV. The SXT values are extrapolated from observations at 1.6 keV assuming temperatures of either 1.1 MK (dotted) or 1.3 MK (dashed).

This plot shows several things, but the essential item is the space between the heavy dashed line and the green histogram. The latter represents the upper limits given in the 1966 paper by Peterson et al., and the former is an extrapolation of soft X-ray spectra from the Yohkoh soft X-ray telescope. In between one sees points showing a first look at RHESSI observations obtained from a special observational sequence in which RHESSI pointed away from the solar direction by a small angle, thus permitting the modulations. Although some of the points are non-zero (and positive), these are only first results and are best considered as upper limits.

This is but the start of the search for quiet Sun X-rays with RHESSI. In future nuggets we shall describe a different method of observation and also show much-improved results from this technique.

Biographical note: Iain Hannah is a member of the RHESSI group at UC Berkeley and this work is conducted with Gordon Hurford and Hugh Hudson.