Prior to the launch of the Solar Dynamics Observatory (SDO), solar flares had routinely been described as having three phases of development: precursor, impulsive, and gradual (or "main"). The latter in particular had a clear physical description in terms of the cooling of the hot coronal loops created during the impulsive phase. The extreme ultraviolet (EUV) irradiance obtained by the EUV Variability Experiment (EVE) onboard SDO then suprisingly revealed an "EUV late phase" (ELP) as well (Ref. [1]): some flares exhibit a second peak in 'warm' coronal lines (e.g., Fe XVI 335 Â, formed at about 2.5 MK). This typically occurred several tens of minutes to hours after the soft X-ray peak that defines the flare magnitude. The flares with an ELP as reported in the literature typically appeared to display a circular-shaped ribbon associated with the main-phase flare arcade and a remote ribbon associated with the ELP arcade of a larger size. It has been debated whether ELP is caused by additional heating or extended plasma cooling in the longer loop system.

Ref. [2] carried out a survey of 55 M-and-above GOES-class flares with ELP from 2010 til 2014, including 19 circular-ribbon, 23 two-ribbon, and 13 complex-ribbon events. It was a surprise that among the ELP flares the number of classic two-ribbon flares turned out to be comparable to that of the circular-ribbon flares. Further, the proportion (48%) of two-ribbon flares that possess an extreme ELP, i.e., the late-phase peak exceeding the main-phase peak, is greater (37%) than that of circular-ribbon flares. The extreme ELP is often considered as a signature of additional heating. Nevertheless, the survey found that for the majority of events, the delay of the ELP peak relative to the main-phase peak in the EVE 335 Â irradiance profile can be well accounted for by plasma cooling (Figure 1), because the loop system responsible for the ELP emission is generally on a larger scale than the main flare (Figure 2). This implies a slower development. The ELP sources (Figure 3) are well-separated from the structure responsible for the main-phase emission. 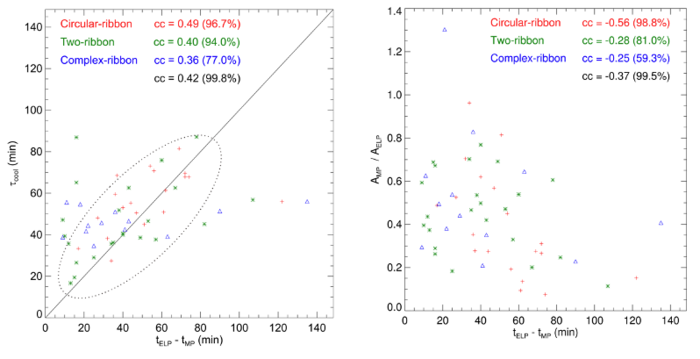 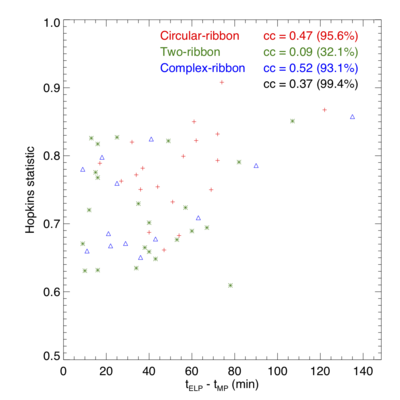 Figure 3: Scatter plot of the Hopkins statistic against tELP-tMP. Ths statistic is employed to quantify the relative separation between the main-phase and ELP emission; that the value is closer to unity indicates a higher degree of separation (see details in Appendix B of Ref. [2]). Circular-ribbon, two-ribbon, and complex-ribbon flares are marked by red crosses, green asterisks, and blue triangles, respectively. The corresponding CC is shown with the confidence level in the brackets. The CC in black is calculated for all of the events

Simple cooling may be the dominant factor causing the ELP phenomenon, but additional heating during ELP is more likely present in two-ribbon flares than in circular-ribbon ones.