With RHESSI we generally study the most punctuated form of solar activity, namely the flares, but these occur in swarms. The swarms of flares include many tiny ones, as well as some powerful ones, and recently the latter have become especially interesting in terms of Kepler photometry (1; see earlier Nugget) and remarkable results on radioisotope structures in tree rings [2]. In the solar context, the best we can do for "extreme event" is the celebrated Carrington flare [3], about which we have also had an earlier RHESSI Science Nugget.

With this term we mean the "Black Swan" events that seem impossible (such as the appearance of a black swan) until they appear unpredictably (as when Europeans spotted them at last in Australia). In our context it means that one of those Kepler superflares could pop off on our mild Sun, not very frequently, but with devasting consequences if it did.

Figure 1 shows two suprising contributions to our knowledge of solar extreme events, in work that has been reported only in the last few years ([1],[2]). Either of these might imply that the Sun could do something very drastic.

How do the extreme events fit into the population of flare magnitudes, which since the 1950s has been known to follow a general power law? We described one aspect of this, showing off the beauty of the law, in an earlier Nugget. One possibility is simply that they extend the power law, such that if one waited sufficiently one would eventually catch an event like this.

But the power law is not fixed in amplitude. With RHESSI we have now had more than one 11-year cycle to study flare occurrence, as partly described in the Nugget: Cycle 24 - don't panic yet! Instead, the intercept of the power law slides up and down as activity waxes and wanes. For the present-day Sun, we see this amplitude, measured logarithmically as a maximum-to-minimum ratio, to exceed three decades on a time scale of 243 days (convenient multiple of a mean rotation period). Figure 2 shows this with the same data shown on different binnings of 3, 9, and 27 times 27 days. Even at the longest binning, there are zeroes in the histogram. At the depths of solar minimum in 2008, especially, it appears as though the Sun simply turned off. This mainly shows that a single power law is too simplistic a descriptor of solar activity. There is a physical limitation, imposed by observing time, on the upper limit to the unobservable maximum-to-minimum ratio.

Figure 2: The solar-cycle variation (25 years) of M-class flare occurrence, as captured by [GOES}. The display shows both linear and log representations, at different innings, and the suggestion here is that the maximum-to-minimum ratio may really diverge.

So, how does solar/stellar activity evolve, based on flare signatures, on much longer time scales? That is the question posed by the Kyoto group of K. Shibata, who have pioneered so much in Kepler "superflare" research [1] and who generated the left panel of Figure 1.

The Sun, at its present comfortable evolutionary stage, is winding its way along towards a relatively well-understood end: gross expansion into a red giant, some meandering development as its fuel is spent, and then a drastic splash into a lovely [planetary nebula] within which a white-dwarf core remains as the only stellar object left. Figure 3 shows some planetary nebulae, which indeed take on a wide variety of forms. This variety does not seem to be well understood, but the basic points regarding the evolution certainly are. We're watching this development from the halfway point, about 5 billion years from the start and equally far away from the end. Eventually the Sun will become a planetary nebula such as the celebrated "Red Rectangle" [4] or something like what are pictured in Figure 3 here.

In a recent ESA/Hubble Space Telecope/NASA press release, the physical issues involved with tracking solar activity may have clarified to a certain extent. It is reasonably clear from Figure 3 that the terminal state of solar development, if it resembles the Red Rectangle, can be nothing more or less than the result of 2D magnetic reconnection. 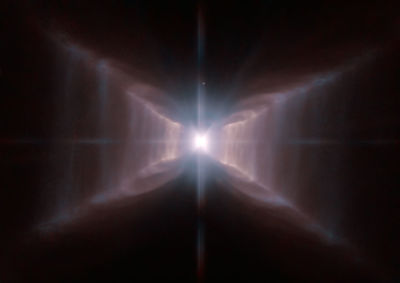 Figure 4: Magnetic reconnection at the end of the Sun's active lifetime? Photo courtesy ESA/Hubble and NASA showing the star HD 44179 and its surrounding planetary nebula.

Jokes aside, it is interesting for us to try to understand how extreme forms of stellar magnetic activity may develop. This also has very practical consequences, since our newly developed human technological civilization may well have great instabilities that could be brought about by a solar Black Swan event. Altough in our discussion of the M-class flare statistics we tried to establish that we are reallly ignorant about these things, based on a minuscule glimpse of how the Sun is working, the data [1] and the tree-ring data [2] should make us think twice.