The flare nimbus phenomenon was discovered in 1960 at Dunsink Observatory (Ireland) in films recorded by an Hα Lyot Heliograph sited at the Cape of Good Hope. This instrument was part of a chain of such telescopes set up during the International Geophysical Year (IGY) to support continuous global coverage of solar activity during the maximum phase of Solar Cycle 19.

The nimbus consists of a dark expanding halo seen in the plage regions surrounding major flares. It first appears at, or within a few minutes of, the time of maximum flare intensity in Hα light. It reaches its greatest extent about thirty minutes after flare maximum. Its maximum dimensions (estimated visually) lie in the range 200,000 - 400,000 km, but photometrically, it is about one third larger. Its upper and lower lifetime boundaries were, in the sample of events available, 53 minutes and 129 minutes respectively, and their approximate duration times were in the range one to two hours.

Figure 1 shows heliograms of the first reported example of the nimbus phenomenon, which was identified in association with an importance class 3 flare on 1 April, 1960; figure 2 indicates the location of the boundary of the expanding dark nimbus (dashed line) at various times relative to the flare emission filaments (black) recorded in the Cape records. 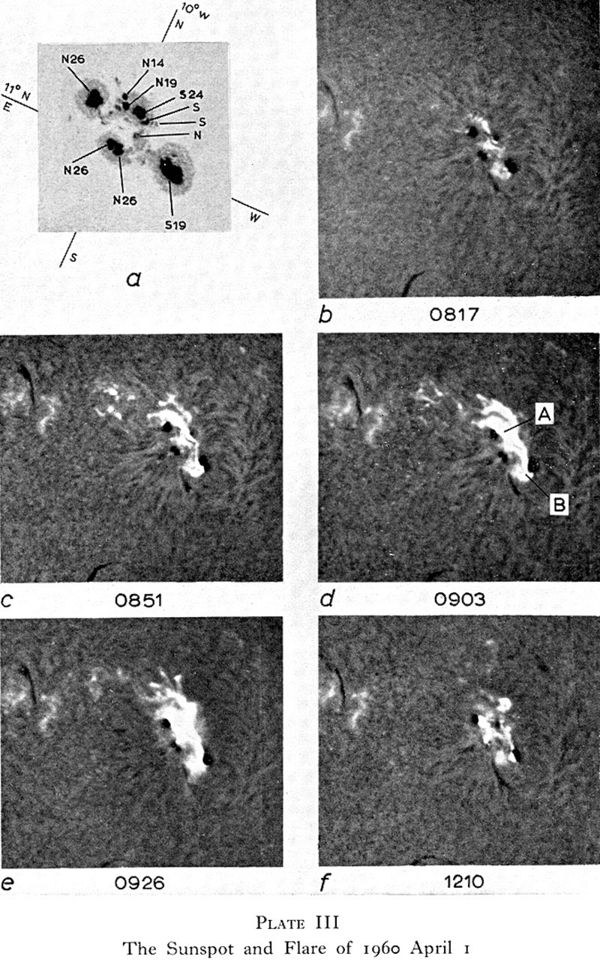 Figure 1: Top left: The underlying sunspot group (field strengths, as recorded at Potsdam in units of 100 G); images, selected Hα heliograms from the flare of 1 April, 1960 recorded in Cape data. 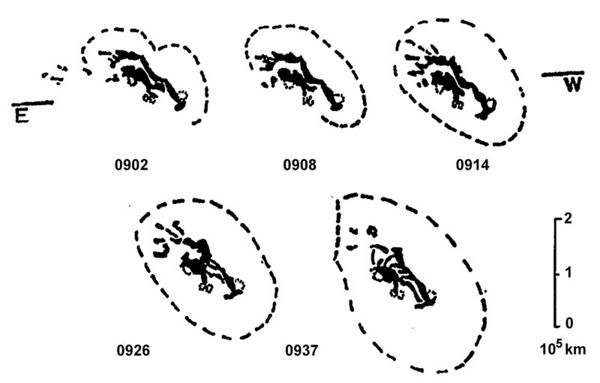 How are nimbus-related flares characterized?

It was reported by the Dunsink observers that nimbus-related flares are characterized by having twin bright filaments that cross major underlying spot groups and are aligned along the major magnetic axis of the active region No instance was found of a nimbus accompanying a minor flare. All of the nimbus events studied were associated with an erupting filament and accompanied by radio type IV continuum emission. Further, within a nimbus, the striation pattern characterizing the underlying spot-group was either completely destroyed or lost its pre-flare configuration. Photometric work carried out at Dunsink indicated that the main effect was a reduction in the intensity of the large bright elements making up the striation pattern so that these areas were reduced to equality with the darker spaces that separated them. It was inferred that the magnetic field in the chromosphere, which is responsible for maintaining the luminosity and alignment of that part of the striation pattern located close to a large flare, disappeared during nimbus events, and was not restored/replaced for one to two hours.

Examples of the nimbus phenomenon were also identified in heliospheric data recorded by other instruments in the chain of IGY Hα Lyot Heliographs as well as in existing photographic records. The total number of confirmed reports of the nimbus is 15, with three possible cases awaiting further investigation. Many papers in the 1960s, including several from Dunsink, reported the observations and presented speculations as to the nature of the nimbus. These ideas were duly debated within the scientific community. However, shortly after the time of its discovery techniques in solar physics shifted toward higher resolution and narrow-field observations. In these circumstances no further examples of the nimbus were reported, and the topic has remained dormant over several decades.

Interpretation based on present-day knowledge

The present author, one of a team of three (M. A. Ellison, S.M.P. McKenna and J. H. Reid) who originally discovered the nimbus, recently returned to the original observations and again placed the results regarding the nimbus in the public domain in a paper in Solar Physics [Ref. 1]. This paper provided an overview of the previous interpretations of the phenomenon. In the intervening decades, our present-day knowledge has extended to coronal mass ejections (CMEs) and coronal dimming events. These phenomena were not discovered until the early 1970s. It could be suggested in this paper for the first time that the nimbus provides a signature of CME-related reorganization of the magnetic field in the chromosphere, such that the transverse magnetic field component decreases and transforms into the line-of-sight component as the vector field stretches out in a rising CME. Coronal dimming provides a complementary signature of CME-related mass depletion in the corona. Overall we can conclude that nimbus development, like coronal dimming, constitutes a diagnostic signature of the escape from the Sun of a CME.

[1] Discovery in 1960 of the flare nimbus phenomenon and changes with time in its interpretation,