Hard X-Ray (HXR) bursts and solar Type III radio bursts are some of the commonest solar emissions caused by energetic electrons. In a well-known solar flare cartoon, electron acceleration produces beams propagating both downwards and upwards along magnetic field lines. The downwards-going beam propagates along closed loops and produces HXR emission by collisional bremsstrahlung. The signature of the upwards-going beam is a Type III radio burst, which occurs at the local plasma frequency or its harmonics. As the beam propagates away from the sun along open magnetic field lines, it encounters plasma of rapidly decreasing density, so emission occurs at rapidly decreasing frequency, giving Type IIIs a characteristic "hockey stick" shape. 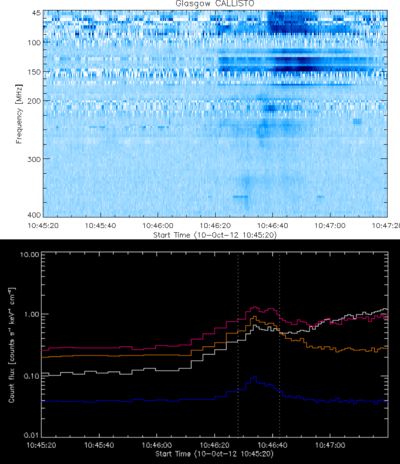 Figure 1: The first radio event captured with Glasgow Callisto (with averaged background subtracted) and with Fermi

Figure 1 shows the first-light observation, a probable Type III burs as identified by its frequency range and rapid frequency drift. Observations from other sites in the Callisto network help to confirm this identification. RHESSI did not observe this first burst, but X-ray data from the Fermi Gamma-Ray Burst Monitor are available, and are also shown in Figure 1. Simultaneous observations of HXR and Type III emission such as this provide evidence for a common acceleration mechanism for the beams producing the two types, and allow us to infer the properties of the electron accelerator. 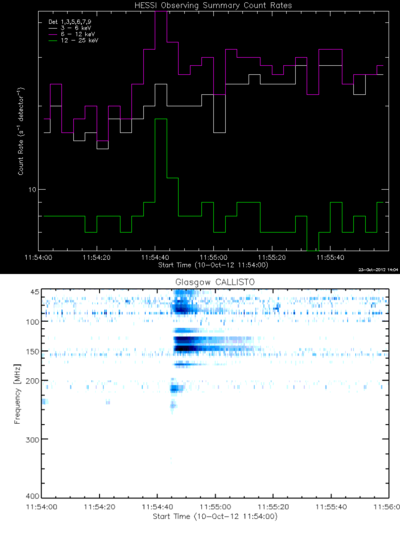 Slightly over an hour later Glasgow Callisto detected a second burst, also identified as a Type III, for which RHESSI data are available, as shown in Figure 2. This event is visible in the 12-25 keV energy band, as well as the lower energies.

The Glasgow Callisto antenna is one part of a larger network, named e-Callisto. Other sites range across the globe, in places including Switzerland, India, Alaska, Australia, Kenya, meaning the network as a whole offers nearly 24 hour observations of the Sun across the entire year. All of the sites suffer some interference from nearby radio sources, including Glasgow. Strong events are visible, such as the two discussed here, and in these cases data from the various locations complement each other. A brief survey of the first 10 days of Glasgow Callisto data show a number of bursts with simultaneous X-ray counterparts, and several without. Comparison with other Callisto sites shows that this is partly due to the Glasgow site missing events which are visible elsewhere, and partly to the relatively low correlation between observed HXR sources, and Type IIIs.