The hard X-ray continuum emission from solar flares must be polarized, especially if the high-energy electrons that emit the bremsstrahlung continuum from a directed particle beam. This is the standard "thick target" model, and thus polarization is a clear prediction of that model. Unfortunately it has not been measured successfuly to date, and so polarization remains as a last primary observational discovery remaining to be made for solar high-energy astrophysics.

The second Chinese space laboratory Tian Gong 2 (TG2) was successfully launched from the Jiuquan Satellite Launch Center (Inner Mongolia province, China) on September 15th, 2016 at 14:04 UT. See the launch vehicle being made ready in Figure 1. Among the ten or more instruments onboard, and transported into space, resides [http://isdc.unige.ch/polar/ POLAR - the hard X-ray polarimeter, and the only non-Chinese experiment. This novel instrument was constructed in collaboration between the University of Geneva and the Paul Scherrer Institut in Switzerland, the Institute of High Energy Physics (CAS) in China and the National Center for Nuclear Research in Poland. POLAR is equipped with an array of 1600 plastic scintillators allowing for precise and efficient measurement of linear polarization in the hard X-ray energy range from 50 keV to 500 keV. POLAR's primary goal is to measure the polarization of prompt emission from Gamma Ray Bursts (GRB) - the biggest explosions in the Universe. It is also capable of the precise measurement of polarization in solar flares. 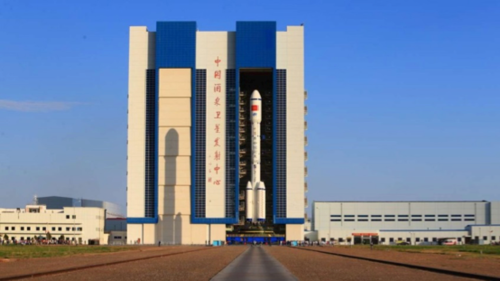 Figure 1: Rocket with Tian Gong 2 (and POLAR) rolling out towards the launching pad.

The novel measurement principle of POLAR utilizes Compton scattering with coincidence detections between two fast, light plastic scintillator bars. It has a large field of view on the sky, and its matrix of 40x40 scintillating bars gives an effective area Aeff of almost 200 cm2 and a big modulation factor to enable the instrument, for the first time, to conduct polarization measurements on a statistically significant sample of gamma-ray bursts and solar flares.

The main features of POLAR are presented in the table below.

TG2 will fly during the decreasing activity of solar cycle 24 - the weakest cycle for the last 100 years. Despite this, POLAR may detect a sufficient number of X-class solar flares, producing a breakthrough in our determination of X-ray polarization in solar flares, and hence important facts about the basic mechanisms of flares. Our comparative studies of predictions estimate the number of X-class flares seen by POLAR will be at a level of about a dozen per year. Calculations show that the polarization level can be determined with an accuracy better than 5%, which should be sufficient to test various electron transport and acceleration models in solar flares (see Fig 2). 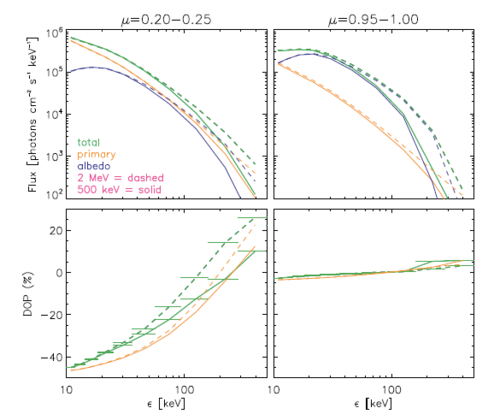 POLAR onboard Tian Gong 2 is scheduled for two to three years of operation in space. For its main scientific goal one anticipates the detection of several tens of very strong GRB events. These unique data could provide a final identification of the still puzzling physical mechanisms of GRBs.

POLAR was switched on 22 September 2016, 10:45 UT. The polarimeter is now undergoing a one-month long commissioning and calibration period. The initial data show that the whole instrument works fully as expected, and its operating conditions are stable. All detection channels are delivering useful data. The POLAR Data Server located at the Paul Scherrer Institut receives preprocessed telemetry packets from the satellite with a delay of only about 24 hours!

The first transient event from space was detected by POLAR on September 23rd (Fig 4), and the first solar flare was detected on October 12th. This event was classified as a C-class flare and was also observed by RHESSI. For the purpose of POLAR cross-calibrations and the analysis of solar events and their polarization, a close collaboration with our partners from the RHESSI community at FHNW in Brugg-Windisch has already been established.

Figure 4: Left, lightlcurve of the first solar flare event observed by POLAR in space, SOL2016-10-12T11:54, just a week ago! Right, the RHESSI file image, locating this event on the solar disk.

Further analysis of this "first solar light" event is ongoing, and we anticipate many more observations in the future.