The New Solar Telescope (NST) at Big Bear Solar Observatory currently has the largest aperture (1.6 m) of any solar telescope in the world, and thus has the best resolution at its diffraction limit. Solar flares are obvious targets for such a telescope: they exhibit tiny spatial scales and have rapid time variation. In this Nugget we describe the white-light continuum emission from three homologous flares, SOL2014-10-29 (C6.8, M1.3, and M1.2 by their GOES classifications). In Ref. [1] we describe these flares as observed by NST, making reference to AIA images in the EUV and high-energy observations from RHESSI and from Fermi/GBM

The three consecutive flares of were impulsive, confined, and short-duration two-ribbon flares (4-5 min). They had plasma ejection and no detectable ribbon separation. All of them produced detectable enhancement in HMI intensity images. At the NST the white-light observations are made in a spectral band at 7057Å due to the TiO molecule. In these three flares we found that the two M-class flares produced TiO emission and hard X-rays above 50 keV, whereas the C-class flare did not. In Figure 1 we plot RHESSI hard and soft X-ray contours over the 18:49:44 UT NST/TiO original image and a 18:49:44-18:49:14 UT difference image taken at the flare peak. While RHESSI shows one compact hard X-ray source, the TiO images clarify that there were actually three well-separated compact bright patches. These had >15% enhancement above the quiet-Sun brightness level over a dimension of about 0.2 Mm, with areas of order 1014 cm2. White-light flares often show fine structure, but because of NST's resolution these are among the finest features yet reported. 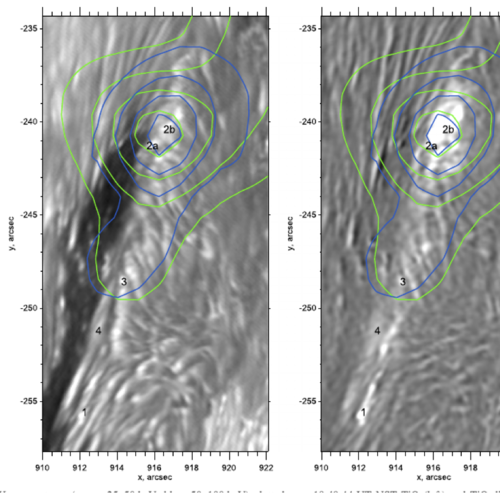 Figure 2 compares the TiO continuum with Hα images. Panels a and b repeat the images of Figure 1, now showing green contours at 6%, 10%, and 22% intensity increase expressed as a fraction of the averaged quiet Sun intensity. The yellow contours outline AIA 94A emission. We see that the TiO enhancement patches tend to be shaped like, and to be co-spatial with, bright penumbral filaments and grains. 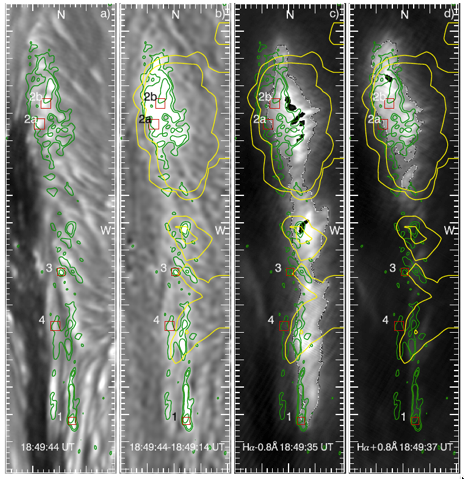 Figure 2: The M1.3 flare as seen at the HXR peak time with TiO 7057Å (a) and Halpha filters (c and d). Panel b is a TiO difference image (18:49:44-18:49:14UT). The green contours plotted in all panels outline TiO intensity enhancements at 6%, 10%, and 22% levels of the quiet Sun intensity. The red boxes outline areas where the intensity profiles were determined. The yellow contours outline AIA 94A emission. The sunspot umbra can be seen at the left side of panel a. Note that the south (lower) half of the Halpha+0.8A, ribbon (panel d) is not seen here as it was obscured by unrelated jets occurring in the foreground. The large tick interval is 1 Mm. The dark patches inside the flare ribbon (panels c and d) represent saturated pixels.

While most of the TiO WL features (e.g., 1, 2a, and 2b) overlap with the chromospheric flare, some are well outside the ribbons (e.g., box 3 and 4). The TiO kernels were displaced eastward relative to the Halpha-0.8Å features by about 500 km (0".7) when viewed at W77 longitude, i.e. very near the limb. This perspective means that the vertical offset between the two emitting volumes was about 500 km. Considering that the visible continuum observed near the solar limb forms on average 350 km higher than that at disk center (i.e., near the temperature minimum region) the lower boundary of the Halpha-0.8Å emitting volume can thus be placed at heights of about 900 km above the τ5000 level, optical depth unity as defined at disk center.

In Figure 3 we plot HXR, GOES X-ray, Hα, Hinode G-band, TiO, and HMI continuum light curves. The TiO curves were normalized by an averaged quiet Sun intensity measured close to the sunspot. There are three types of TiO time profiles. The profiles for sources 1 (dots) and 2b (dashed) are similar and feature a sharp one-minute peak followed by a nearly 3-minute plateau that ended at 18:53:30 UT. These profiles may manifest the occurrence of a strong impulsive heating event followed by a cooling period. The thick green line (low intensity enhancement at source 4) is similar to source 1 and 2b profiles with one exception: it does not feature such a well-defined peak as these other two. Finally, the open-circle line represents intensity variations at source 3, which appears rather Hα-like with a gradual rise and decrease and delayed peak. The rapid decrease of TiO intensity between 18:49:44 and 18:50:14 UT indicates that the cooling time in the photosphere is less than 30~s. It is interesting however, that all four TiO light curves showed a plateau (18:50:30-18:53:30 UT), which lasted until about 30 sec after the RHESSI 6-25 keV flux had diminished. 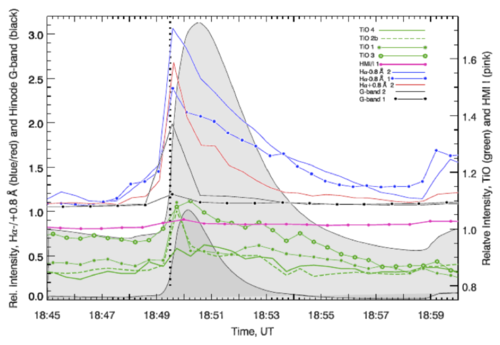 Figure 3: Light curves for the M1.3 flare from NST/TiO (green), HMI continuum (pink), Hinode G-band (black), NST Hα-0.8Å, (blue) and Hα+0.8Å, (red) images. The Light/dark shaded curves show GOES 1-8 Å and GOES 0.5-4.0 Å flux variations. The dots represent the intensity profiles for source 1 (see Fig. 1). The red, blue, and black curves without symbols are time profiles for combined sources 2a and 2b, since they could not be separated in Hα, Hinode, and HMI images. The green dashed line is for source 2b, the thick green line is for source 4 and the open circle line for source 3. The measured intensity is the average intensity of all source pixels normalized by the pre-flare intensity level. The TiO light curves were normalized by the quiet Sun intensity.

Finally, In Figure 4 we plot the probability distribution function of the TiO intensity enhancements. The distribution is non-Gaussian and consists of a normally distributed negative differences, a strong peak at zero and a heavy tail reaching 1400 DN, which is about 30% of quiet Sun TiO intensity. We assume that the noise is represented by the thin Gaussian, and the shaded area is the residual after this "noise" Gaussian was subtracted from the observed distribution. That residual distribution is plotted again in the linear (x) -logarithmic (y) coordinate system in the inset. 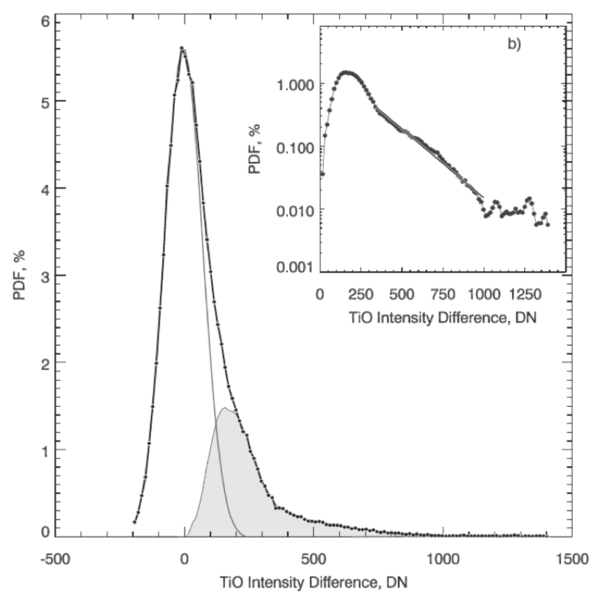 Figure 4: Measured probability distribution function of the TiO continuum enhancements (thick dotted line). The Gaussian (thin solid curve) represents data noise in the difference image shown in Fig. 2 assuming that all negative values are due to data noise. The shaded area is the residual after the noise Gaussian was subtracted from the measured PDF. This residual distribution is plotted in the inset, where the line represents a linear fit to the exponential law

The observed TiO emission could be decomposed into three components: i) weaker, which show nearly Gaussian distribution, ii) mid range enhancements which are distributed exponentially, and iii) strongest intensities, which are nearly independent of the amplitude.

The data suggest the TiO (continuum) and chromospheric (Hα) emissions did not originate in the same chromospheric volume as some models suggest. The temporal and spatial structure of the white-light flare was largely defined by the associated magnetic fields, which favors the direct heating models, where the flare energy is directly deposited in the temperature minimum region by the accelerated electrons. The fact that no continuum emission was detected in the C6.8 flare cannot simply be attributed to low spatial resolution and is most likely related to the flare energy.

[1] "High-resolution Observations of a White-light Flare with NST"