Active regions (ARs) with sigmoidal structure, generally seen in soft X-rays and the EUV, are prone to eruptions (coronal mass ejections, CMEs) and associated flares. Some ARs show a rapid succession of CMEs and flares over a timescale of a few hours. These can have astonishing similarities in all properties, in which case they are called homologous events. The time intervals can be small compared to the typical timescale for magnetic energy build-up in the existing coronal fields, so the emergence of new magnetic flux has been suggested to be responsible for the phenomenon of repetitive flares and CMEs (Ref[1]). On the other hand, successive CMEs can also occur from ARs in a timescale comparable to energy build-up by footpoint motions in the post-emergence phase. The velocity field derived from tracked magnetograms indicates frequently persistent shear and converging motions of polarity regions about the polarity inversion line. These motions introduce huge amounts of magnetic energy and helicity in the region's magnetic structure, enabling flares and CMEs. While the stored energy configuration is vital, the persistence of sigmoidal structure is the central feature for the successive CME occurrence from a source AR and had been the central subject for eruptive activity.

AR 12371 was in a post-emerged phase, producing successive fast CMEs in the span of its disk transit (18-25 June, 2015). EUV observations at the Sun register the initiation times of four eruptions as June 18/15:05 UT (CME1), 21/00:45 UT (CME2), 22/16:15 UT (CME3), and 25/07:30 UT (CME4), respectively. Subsequently, the disk-integrated GOES X-ray light curve (Figure 1a) shows that the CMEs are associated with long-duration M-class flares. The EUV double dimming seen in (AIA) images, three-part CME structure seen in the LASCO images, and the fast propagation speeds of (>1000 km/s) all characterize these CMEs as homologous events.

The magnetic evolution in this AR is summarised in Figure 1. The sigmoid region exhibits persistent shearing and converging motions of opposite magnetic polarities over the seven days of its evolution (Ref [2]). At the same time, the net flux decreases over time (24%) with a build-up of magnetic twist lasting until 22nd June. The magnetic energy injection by observed magnetic motions is above 5 x 1027 ergs/s, which would suffice to drive a maximal fast CME (~1033 ergs) in about 50 hours. The magnetic helicity flux, as derived from the footpoint motions, is negative and co-spatial with the coronal sigmoid. This implies qualitatively that the pumped helicity flux is being utilised in the repeated build-up of a sheared core along the polarity inversion line.Importantly, the normalised helicity flux is moderately high (0.15 turns) compared to the non-eruptive super active region 12192 (0.02 turns). A high value of magnetic-flux-normalized helicity flux typically suggests the presence of a coherent twisted field. 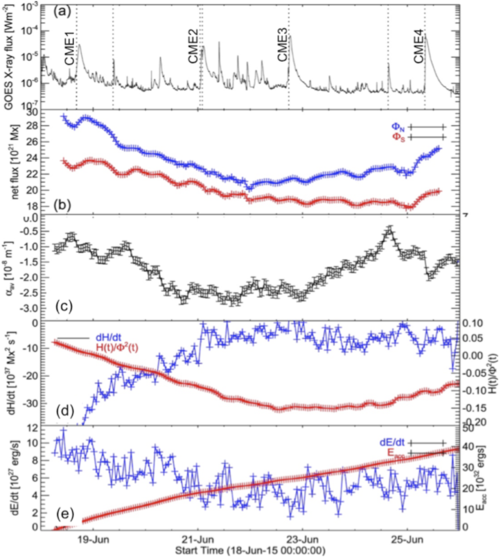 Figure 1: Magnetic evolution in AR 12371 during its disk transit, (a) disk integrated soft X-ray GOES flux. Vertical lines mark the CME start times, (b) net magnetic flux φ from north and south polarities, (c) coronal twist parameter αav averaged over the AR, (d) helicity flux injection (in blue), and coronal helicity H normalized by Φ2 (in red), (e) energy flux injection dE/dt (in blue) and its coronal accumulation (in red). The observed decrease in net magnetic flux is due to flux cancellation at the polarity inversion line. Corresponding to the persistent strong shear motions, the H-flux is strong up to June 21 and accordingly ∣αav∣ shows an increasing trend.

Force-free models of the AR have been computed from the observed photospheric magnetic field, and the structures nicely reproduce the EUV sigmoid mostly with sheared arcades (Ref[3]). Especially, the core-field is a combination of double inverse J-shaped and inverse S-shaped field lines with dips touching the photosphere. Such field-lines are formed by flux cancellation reconnection of opposite-J field-lines at bald-patch locations, where field lines are tangent to the photosphere and curved upward (Figure 2). This study demonstrates the formation of a weakly twisted flux-rope from large scale sheared arcade field-lines. Further, our study infers a steep decrease of the background coronal field meeting the torus instability criteria at low height (~ 40 Mm) in contrast to non-eruptive ARs. When the magnetic field becomes torus unstable, the weakly twisted flux rope is upward destabilised. This induces further reconnection below the flux rope and leads to a CME as the overlying magnetic field is weak. A new, but similar, stressed magnetic configuration is next reformed by photospheric motions leading to the repetition of the above scenario. This induces a series of homologous CMEs/flares. Finally, the modelled structure captured the major features of sigmoid-to-arcade-to-sigmoid transformation, that is being cyclic under continuous photospheric flux motions. 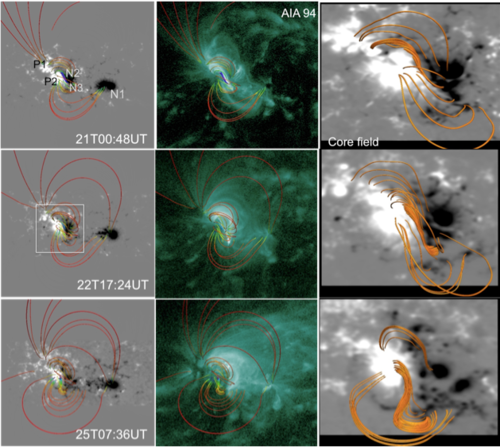 The homologous CMEs with associated long-duration flares occur with predominant shearing and converging motions in a decaying AR. The photospheric motions build coronal magnetic helicity and energy with the formation of a sigmoidal structure which is recurrently pushed toward instability. Finally, with the estimation of magnetic helicity normalised by the magnetic flux square, we are now able to distinguish the eruptive nature of ARs from confined ones, thanks to continuous high-cadence SDO observations.