A solar flare is usually defined by a multi wavelength brightening event, including high-temperature emissions. Thus the flare mechanism is a candidate for being the process needed to maintain the temperature of the corona at more than a million K. But it is now known, thanks partially to RHESSI, that the total energy of flares, detected as brightening events, is insufficient to compensate for the known energy losses of the corona (Ref. [1]). So, should we conclude that the flare heating is not a dominant mechanism for the coronal heating? No! It is far too early to give up this reasonable idea of episodic heating. There could be many more smaller energy releases into the corona, not detected yet just by instrumental limitations, and not flares in the classical sense. These microsocopic events might contribute significantly to heat the corona.

One idea is to search for an extra hot component in the coronal plasma during in the absence of a time-series signature such as a flare (Ref. [2]). Since these weaker flares energy releases would need to cool from a maximum temperature, very hot (say, >10 MK) plasma could be present at all times if the tiny flares occur continuously. Therefore we coud interpret any >10 MK "superhot" component as a signature of ensamble of such tiny flares. If we find them such high temperatures even in the absence of localized brightenings, it would suggest the presence of these tiny flares.

Although such a superhot component would emit hard X-rays, RHESSI is not the best instrument to investigate them. RHESSI finds the solar hard X-ray spectrum to be very faint - undetectable - outside flare times (Ref. [1]). Its detectors and optics were designed to have large effective area up to high energies, and the background counting rates are not low enough to detect hypothetical tiny, hot events consistent with general coronal heating..

We have instead used data from the second flight of the Focusing Optics Solar X-ray Imager (FOXSI-2) sounding rocket experiment, launched in December, 2014. FOXSI has superior sensitivity for faint sources by combining large collecting area with the very low background counting rates made possible by focusing optics and small-volume semiconductor imaging detectors. This leads to a much superior signal-to-noise ratio for detecting the faint superhot component expected.

A FOXSI-2 hard X-ray image overlaid on the a soft X-ray image from the Hinode/XRT instrument is shown in Figure 1 (bottom). The image on the upper right is just an illustrative computer graphic. The XRT and FOXSI-2 lightcurves of the upper active region, marked by yellow box, are shown on the top. We cannot see any brightening during the time period marked by the blue box (19:13:47-19:14:25 UT). GOES also did not show any intensity increase during this time period. Therefore, we would have concluded that there had been no flare in this period from this region, using only these earlier instruments. However, FOXSI-2 did successfully detect hard X-rays from this region, something that could not have been done without this novel instrument.. 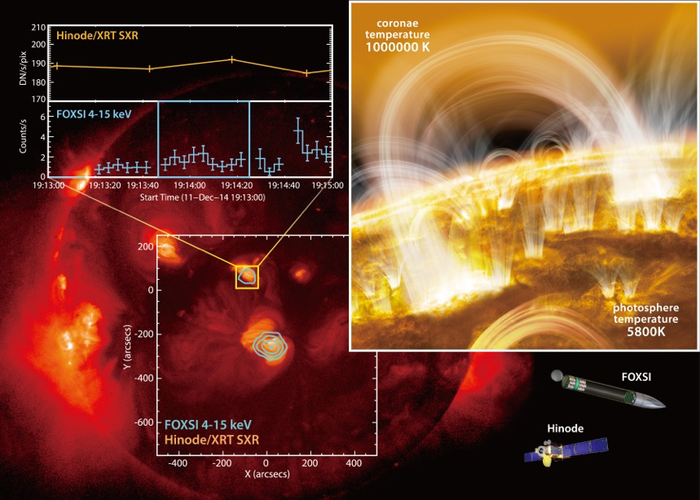 We estimated a temperature distribution from this region - its "differential emissiom measure (DEM)" - combining the XRT and FOXSI-2 data to check to pin down the effective temperature of the FOXSI-2 hard X-ray source. Figure 2 shows the domains, defined by "loci curves", consistent with the XRT and FOXSI-2 observations. Each of the magenta and blue curves corresponds to an XRT filter or a FOXSI-2 energy band. The actual plasma temperature distribution should below but, but not too far from, those colored loci curves. The black data points show the most likely true distribution, with uncertainty ranges. We can see that a superhot component above 10 keV is required. It is a significant detection because we cannot otherwise explain the presence of the high energy emission, especially above 7 keV where only about 4% of the >7 keV emission could be explained by plasma at temperatures below about 10 MK.

Figure 2: The inferred differential emission measure of this region. The two sets of data define the regions ("loci curves") below which the source temperatures must be located. An additional hot component, extending above 10 MK, is necessary to explain the FOXSI-2 observation.

The origin of the >10 MK extra hot component could be an ensemble of many tiny, unresolvable flare-like energy releasess. In this study, we cannot infer the energies of the individual events, or their occurrence frequency, since they are not resolved. Until we succeed in doing this, we cannot be sure that these newly-found sources actually do contribute substantially to the coronal heating. However, we can at least say there is a high-temperature source not attributable to ordinary solar flares. The details of this work are described in Ref. [2].

As the next step, the third flight of FOXSI (FOXSI-3) is scheduled for Summer 2018. In FOXSI-3, there will be two major updates for the instrument: we are attaching X-ray collimators in front of the optics to reduce stray light, and we will now do soft X-ray imaging spectroscopy with a high-speed CMOS detector (Ref. [3]). We will improve sensitivity and dynamic range with the collimator, which will greatly improve precise measurements especially for faint regions close to bright sources (i.e., active regions). Photon countng soft X-ray imaging spectroscopy will arrive for the first time in FOXSI-3 by using one out of the seven hard X-ray telescopes to feed a CMOS detector. This will for the first time directly measure plasmas with temperatures between the soft X-ray (XRT) and hard X-ray (FOXSI) sources.

Since the FOXSI hard and soft X-ray instruments are quite new and valuable for the next generation of observational studies of the Sun, we plan to propose a satellite mission to JAXA to be launched in mid 2020s based on these instruments (Ref. [3]). The project is called the Physics of Energetic and Non-thermal plasmas in the X-region (PhoENiX), and Noriyuki Narukage at the National Astronomical Observatory of Japan leads the team. I hope PhoENiX can collaborate with many of solar physicists all over the world and help in our understanding of many topics in solar physics.

[1] "Microflares and the Statistics of X-ray Flares"