Radiation from electrons accelerated in the solar atmosphere

Flare-accelerated electrons are subject to various influences as they move around in the solar atmosphere. They may have close encounters with other electrons and ions, changing energy and direction as they interact via the electrostatic force. They feel a force due to the background magnetic field that keeps them bound in tight spirals around the field lines. They may exchange energy with optical photons from the photosphere, which are numerous so close to the solar surface.

Each of these interactions can give to rise to X-rays, at least in principle. From close encounters with other particles we get bremsstrahlung radiation, the mechanism by which most flare hard X-rays are produced. All analysis of RHESSI data - including the work described in other Nuggets - supposes this to be the case. In the presence of a magnetic field, very high energy electrons emit synchrotron radiation. This accounts for radio radiation from flares but getting X-rays this way needs electrons of unfeasibly high energies, for which no other evidence exists.

The previous Nugget invoked Compton scattering of X-rays by 'cold' (or at least, un-accelerated) electrons in the photosphere. In this process the photons lose energy to the electrons. If photons encounter high energy electrons, however, they may gain energy in inverse Compton scattering, which we abbreviate here to IC. We say that the photons have been scattered by the electrons. If sufficiently energetic electrons are present, some of the optical photons streaming away from the photosphere in the course of the Sun's normal luminosity may acquire enough energy to be counted in the X-ray part of the spectrum. 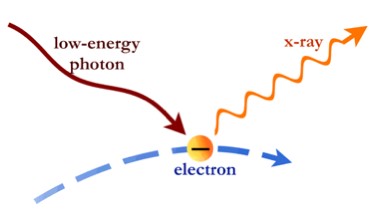 IC scattering is certainly important in other branches of astrophysics and even elsewhere near the Sun. In the Sunyaev-Zeldovich effect, which has been observed, photons from the cosmic microwave background are IC scattered to shorter wavelengths by electrons in the hot gas surrounding clusters of galaxies. The Compton Observatory observed the gamma-rays produced around the Sun by cosmic ray electrons IC scattering optical, solar photons. Could IC radiation be useful to us in understanding solar flares?

Alexander Korchak evidently deserves some notoriety as one of the founders of the Moscow Helsinki Group. In the 1960s and 1970s, however, in a different capacity he thought about the likely importance of these three possible methods of generating flare X-rays. He concluded that synchrotron radiation would never be important and that bremsstrahlung was almost certainly the dominant mechanism (as we still believe). Left open was the possibility that IC radiation could be significant from electrons moving in low density regions (very roughly speaking, so that they collide more often with photons than with other gas particles).

IC radiation needs highly energetic particles. A typical, optical photon has an energy of 2 electron-Volts (eV). We want the scattered photons to have energies greater than 10,000 eV, so that they lie in the X-ray range. A photon can increase its energy in collision with an electron by up to about 4γ2 where γ is the electron's energy in units of its rest mass. So we need to have electrons that are travelling very close to the speed of light, whose energies are hundreds of times their rest mass energies. Fortunately we know from X- and gamma-ray observations that these exist.

There are also rather more exotic possibilities. We know that energetic ions, accelerated in at least the largest flares, produce positrons, the anti-particles of electrons, when they collide with other ions in the solar atmosphere. RHESSI has observed the gamma-rays produced when the positrons annihilate with electrons and they may tell us interesting things about the deep atmosphere. Positrons differ from electrons only in charge: they are just as capable of producing IC photons. The nuclear physics processes that produce them automatically give them very high energies, with the number γ that we used above typically around 200. Electrons and positrons are both leptonsso let's use that word to refer to both together.

Korchak's political dissidence is doubtlessly admirable but we don't need to become scientific dissidents by following in his footsteps: we don't believe we can account for the majority of flare X-rays this way. If we can observe the faint patches of radiation produced by IC radiation when energetic leptons pass through the corona, however, we will have opened a new window on the most extremely energetic particles, electrons and ions, energised in the flare process.

With such energetic leptons, effects of special relativity become very important, as they do in still more extreme astrophysical contexts. IC radiation is strongly beamed, i.e. we mostly see radiation from those particles that are coming straight towards us. Also we get the most energetic photons when the photon and the electron collide head-on. This poses a slight problem: if electrons have to be coming towards us, the best-placed photons have to be moving away from us - towards the Sun! Such photons will be arriving from other stars but they will be far too few in number to be interesting. So we carried out a detailed calculation to see if we could still get observable IC radiation from the restricted range of photon directions flowing outward from the solar surface - we can. 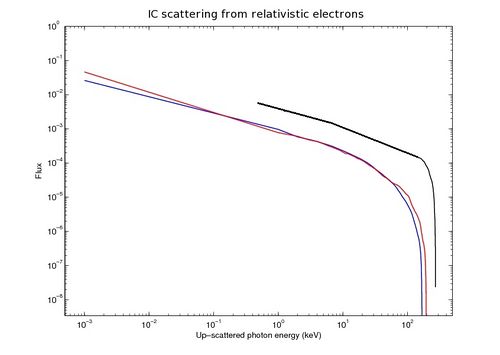 Figure 2: Photon spectra at the Sun (photons per keV per second per source electron) from fast electrons with a power-law energy distribution, i.e. E-3. 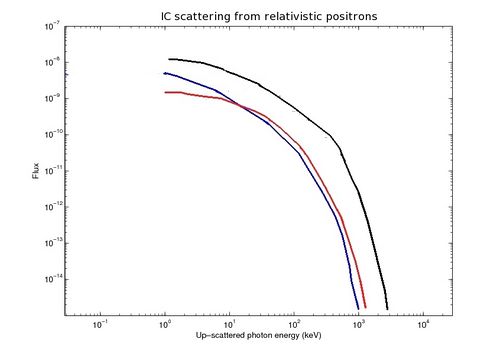 Figure 3: Photon spectra at the Sun (photons per keV per second per proton) from positrons produced by protons with a power-law energy distribution, E-3.

Our two figures show the X-ray spectra we'd expect from energetic electrons, and from positrons produced by energetic ions at the Sun. We assume that plasma waves make their directions change all the time so there are always some of them coming straight towards us. Because of the special relativity effects we already mentioned, IC radiation will be brightest for flares at the solar limb. The photon spectra tend to be hard, i.e. there is a high proportion of the more energetic photons. Likely intensities are low but not unobservably faint. The hardest (i.e. flattest) spectra shown here would be incompatible with bremsstrahlung radiation and thus difficult to mistake. Our first plot is for IC radiation due to relativistic electrons in a power-law distribution between 0.5 MeV and 100 MeV, whereas the second figure shows the IC spectra due to relativistic positrons produced as secondaries of a power-law distributions of protons, with a maximum energy of 3 GeV. The colour-coding in both plots is the same: the blue curve represents the spectrum from the solar disc centre, the red curve for an angle of 30 degrees from disc centre and the black curve for the limb. They are both also for an incoming photon energy of 2 eV. Electrons and positrons with the same energy distribution would of course produce identical IC photon spectra, but the positron energy distribution from proton-proton collisions is quite different from the power-law primary electron distribution assumed in Figure 2.

Could this be relevant to understanding some of the coronal X-ray sources already identified? Are there other faint, hard coronal sources just waiting for an IC interpretation? Maybe other RHESSI investigators can comment....